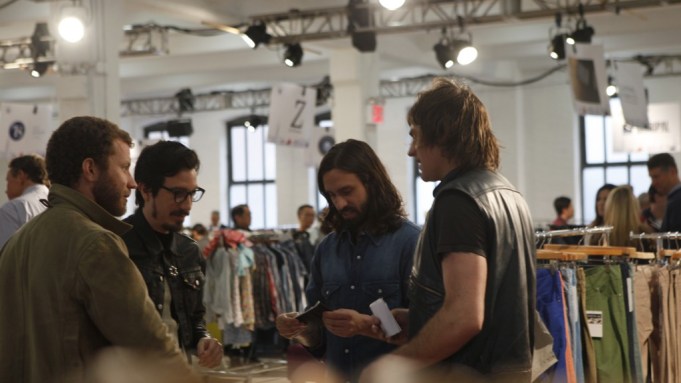 NEW YORK — Kingpins’ semiannual New York market was founded as a boutique denim show that boasted of focus rather than enormity.

Heading into its 10th year in business as it prepares for its two-day run at Center 548 here on July 16, it remains true to its previous mission but has a slightly more ambitious calling. And a bit more scale than originally expected.

“The single most important thing we want to do at Kingpins is introduce more intellectual content,” said Andrew Olah, chief executive officer of Olah Inc., which produces the shows in New York, Los Angeles, Hong Kong and, beginning next year, Amsterdam. “From the very start, we viewed the show as a zone of intelligence for the denim industry. I don’t think there’s ever been enough of that in the industry, and it’s always been extremely important to us. Of course, we’re about being a trade exhibition, but in a different, more focused way. We want to send people away smarter than they arrived.”

Kingpins’ upcoming New York edition will have about 55 exhibitors split not only among denim mills and vertical manufacturers and its usual contingent of suppliers of machinery, technology and associated products, but also a calendar with more events, including seminars and presentations. (See schedule below.)

Additionally, Kingpins is working to turn the show, which is by-invitation for exhibitors and attendees as well as media, into a forum for breaking news events. At the upcoming show, Bayer CropScience LP will disclose information about a new sustainable cotton brand it’s planning to bring to the market.

Olah noted that each of the shows his firm produces — it’s ceased doing shows in Shanghai and Mumbai — has a specific personality and is geared to the needs of the local audience. Los Angeles has become “more L.A.-centric” and geared to the needs of the premium market that has thrived from both a manufacturing and headquarters perspective in that city. The Amsterdam show, which begins its first two-day run next April 30, “will need to be very high-brow. We’re lucky to have the flexibility to not be very big and go a bit upmarket instead in a city that has become the center of the European denim market.”

New York’s place in the national and global denim markets is different, with a broader assortment of brands and price points. “It’s a larger show with a higher number of exhibitors and needs to address a broader range of needs and interests,” Olah said.

Kingpins started in New York as a private show in which Olah assembled his clients and their existing and prospective customers. The size of Olah’s network allowed him, beginning in 2004, to expand the fairs into broader markets that retained their denim-based identities.

“We weren’t experienced show people,” he recalled. “As we got into it, we wanted to make it into something that hadn’t existed before — a trade exhibition for new, specialized products, but different, more targeted.”

He’s remained true to that mission in the 10 years since and now views the show as “something in the realm of entertainment, in an intellectual kind of way.”

RELATED STORY: The New York Scene, Summer in the City >>

For exhibitors and guests, those themes have resonated, even as they’ve been applicable in different ways to different exhibitors in the different shows.

Scott Morrison has shopped Kingpins in New York since his days with Paper Denim & Cloth and Evisu, and continues to utilize the show to scout new resources and new trends in his more recent capacity as founder and partner of 3×1, a New York-based denim collection.

“It started out as a great, small sourcing show and it’s a bigger beast now, but it’s still just as valuable as a place where you can go and, on a single walk-through, get an immediate feeling for what you need to know to be in the denim business,” he said. “I usually shop it and write my orders off-site, but the show also draws some people who, because of their locations, are almost impossible to write orders with anywhere other than at the show.”

He acknowledged that it’s also got value to anyone interested in “serious networking,” whether they’re just looking to reacquaint themselves with old friends in the denim market or looking for jobs, employees or even financing.

“It’s well organized and well curated, and I’ve never gone where I haven’t gotten something good out of it,” he concluded.

Exhibitors, of course, are looking for more than good memories.

Cone Denim, part of Wilbur Ross’ International Textile Group, was among the first companies approached when Kingpins opted to go for an audience beyond Olah’s original client base. They’ve been at the show ever since.

“We found the show to be quite unique and different from the very start,” said Kara Nicholas, vice president of new product development and marketing at Cone Denim. “It’s one-stop shopping if you’re in the denim market, and it’s the kind of show that people in the New York market find easy to get to. A company in New York can assemble its entire team and head over to the show, even if they have to be in the office first thing in the morning or last thing in the evening.”

Cone produces its denim in the U.S., Mexico and China and shows at the New York and Hong Kong editions of Kingpins. “In any of the markets we produce in, we’re not positioned to be the low-cost maker,” Nicholas said. “We have to have something special, like our SGene [stretch] and SustainBlue collections, and a strong story to tell behind it.”

At this season’s edition of the show, Cone will have new products in both ranges and will continue the selling effort that began earlier with recycled green soda bottles and black lunch trays.

For Rich Tobin, director of merchandising and product development at Tavex, an exhibitor with production in Mexico, the show has taken on greater importance as companies have begun to give the Western Hemisphere more attention in light of rising costs in Asia and pressure in the marketplace to tighten up supply chains.

“As we move forward in the next few years, with so many markets maturing, from the midtier up, it’s not going to be so much boundary-driven as much as where the store or the brand can get the best materials and finishes at the best value and at optimal speed,” he said. “Below the midtier level, people have been pretty much trained to look for and wait for price, but we see new opportunities in midtier, premium and even superpremium. And Kingpins is great that way because the people who walk through the door are already knowledgeable and relevant.”

Michael Lam, senior manager of business and marketing for Central Fabrics Ltd., based in Hong Kong, also attends Denim by Première Vision in Paris and Intertextile in Shanghai. However, he finds Kingpins to have both geographic and atmospheric value.

“Kingpins New York is mainly for U.S. buyers, which is a very important part of our business,” he said. “We’ve attended the show for four years and find that it attracts many different buyers, not just from New York, and has helped us gain U.S. exposure in the time we’ve spent at the show.”

But, like others discussing the show, Lam hints at a somewhat intangible quality that makes it attractive. “Kingpins in New York creates this kind of ‘vintage’ atmosphere for denim that really matches our products,” he said. “It’s not as formal as other shows.”

That’s been one of the appeals of the market to Nexgen Packaging, a label, tag and packaging firm based in Santa Barbara, Calif., that exhibits at Kingpins’ shows in New York, Los Angeles and Hong Kong.

“We really don’t have an interest in going out to a larger show like a MAGIC and trying to rope in business,” said Debbie Bougas, Nexgen’s creative director. “We’re not a land-grabbing sort of a business. We prefer a situation like we have with Kingpins where we can be who we are, deal with companies that share our priorities and values. The boards we put up at the show make it clear that we’re not only dedicated to sustainability but that we’ve done business with some major brands and retailers. So our message becomes, ‘This is who we are. Let us know how we can help you and when.’”

Stylesight Presentations, July 16, 1:30 p.m., and July 17, 11 a.m.
A panel on Tuesday and a discussion of denim trends on Wednesday led by Amy Leverton, senior denim editor of Stylesight.

Transparency in Production, throughout the show.
Lenzing, Stoneville Jeans and Olah Inc., the sponsor of Kingpins, trace the production of garments from yarn to fabric and trim to garment stage.

Tavex Denim Couture and Trend Gallery, throughout the show.
Tavex collaborated with the Trozmer Universidad de Diseno design school in Puebla, Mexico, to produce a series of denim garments that drew inspiration from couture design.