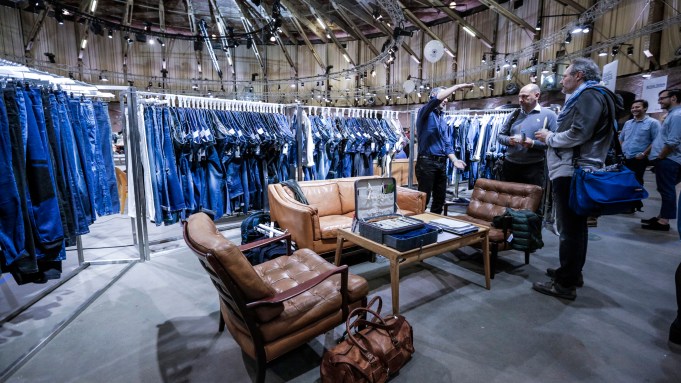 The question was on the mind of many at the Kingpins denim trade show, which ended its two-day run here on Thursday.

With the advent of more eco-conscious consumerism and the rise of sportier denim knits pushing especially hard into a lower-priced segment of the market, the need to redefine the term has become pressing.

“There was a time when premium just meant expensive — and tough to sell,” noted Kingpins founder Andrew Olah, leading a panel of experts at the invitation-only event. “But over the years, it has become difficult to understand what premium really is.”

It’s not enough to be expensive and beautiful, Olah argued. “Premium has to have something exceptional to offer from the social, ethical and environmental points of view. How dare they sell something at 250 pounds [$377.50] at Selfridges if it was not washed in a sustainable way?” he asked.

The panel agreed that a denim made from a high-end fiber and boasting fashion-forward aesthetics could not be considered premium if produced in California, a state plagued by drought, considering that a conventional pair of jeans requires 11,000 liters of water in production.

The participants were also quick to acknowledge that if indigo — the dye that gives denim its blue hue — was introduced today, it would not be accepted given its toxic nature. That said, solutions are available, both in water and chemical waste management, the panel noted.

“One third of our production goes to L.A.,” said Alberto Candiani, global manager and fourth generation member of the family owned Candiani Mill, a pioneer in sustainable denim manufacturing. “The technology is there to produce premium denim with less water, and so we will open a small research and development facility there,” he said, adding: “Premium is a simple combination of aesthetic and performance and sustainability is the most innovative [performance] of all.”

But how do end-consumers know that what they are buying is premium?

“They don’t. That’s the issue,” lamented Fredrik Folkesson, product manager of Tiger Jeans, who linked the problem to fashion’s accelerated product cycles and discount prices, which are increasingly disrupting the industry. “Speed — no matter at what price level — is a big factor. If you need a garment in three to four weeks, you cannot make it premium.”

Folkesson predicted that big players would face more challenges in the field, even if they brand their product as premium. “You cannot buy premium at 7 or 8 euros [$8 to $9] a pair,” he noted.

The advent of knit denim and its significance for the market were another hot topic.

Industry veteran Adriano Goldschmied estimated that 20 percent to 30 percent of jeans produced next year will be done in knit. “Remember when the stretch concept came out? We were part of those people who said it was never going to happen. ‘A real pair of jeans is non-stretch,’ we said. Today, the concept of comfort is going to an extreme. We are at the forefront of a dramatic change.”

Goldschmied urged designers to think outside the box and treat the fabric in new ways, moving it away from yoga-pants culture into higher spheres. He said it was not true that comfort means only close to the body. “Comfort is not just leggings, it’s fashion,” he argued.

At Tiger of Sweden, which opened two more pop-ups dedicated to its jeans division in October, superstretch and stay-black with a soft touch are driving sales. The company is expected to sell 350,000 pairs of denim pants this year. “We are launching a new range that is set between vintage and jeggings,” said Folkesson. “We want that original look but one that has the specifics of leggings.”

“It’s about the aesthetic, not just function,” agreed Darwin Brucker, senior designer of Abercrombie & Fitch. “We don’t really care if it’s knit or true denim if it resembles a jean. Selvedge alone can be hard to sell. We relaunched it for men, but it’s difficult to explain to the customer why he should pay 150 euros [$170],” he said, suggesting that the material was more suitable for connoisseurs rather than the mass market.

Brucker was excited to see more bi-stretch products at the fair. “I think that’s the next revolution. This is going very well for both women and men,” he observed.

Calik Denim was among the innovators in the area, introducing “Elastech,” a new technology eliminating puckering, a problem that can make a product look cheap. By stabilizing the shrinkage of the fabric, the new process also aims to help brands manage their stock inventory as it decreases undesirable size variances through better recovery.

Some were less smitten with the growing trend for knit — non-denim knit especially, which is indigo-dyed but not woven and therefore technically speaking not a denim fabric that should be shown at a denim trade show.

“A jean is a five-pocket garment, and for me as a show curator I’m happy to have anybody who uses indigo for five-pocket products,” said Olah. “Denim is a 3-by-1 woven twill. A jean fabric is something else, it can be many things,” he argued.

“We call it knit indigo instead of knit. Because we think that those who love indigo will appreciate our product,” noted Kingston Kuo, international sales manager of Knitdigo, which produces a knitted material that looks deceivingly like traditional denim. “But it’s true that it has gotten harder to define where denim ends and knit starts. I think we are dealing with a new species here.”

He said his biggest concerns are price and copyright issues, as cheaper versions of the fabric are flooding the market and patents are violated.

Judging by the fair’s offering and buyers’ tastes, selvedge is unlikely to disappear.

“Knit is pushing high into the segment, but selvedge is having a comeback. We have never done it for the high street because it’s hard to explain. But here, there is quite a lot of it,” noted Amanda Barnes, women’s design manager at Visage group. “We are suppliers to high street retailers in the U.K., so we are always looking to give that little extra.”

“There is room for both,” argued Alexandra Melgaard-Lewty, founder of Ink Inklusive. “We see all this comfort stretch coming into selvedge. Traditional mills are taking ideas from knit and making them applicable to their products. This opens the door to innovation.

“The crossover between technology and authenticity creates hybrids that are very exciting,” she added, singling out Berto as an example.

Maurizio Zampollo, brand manager of Berto’s Blue Selvedge line, said he was feeling the pressure from knit denim, but would not sit around twiddling his thumbs. Last month, the brand launched Le Mani, a new collection that is woven by hand instead of a machine, and made in Italy, playing up the idea of a unique, sustainable fabric, of which no more than three meters can be produced a day.

Berto’s range of constructed denim, meanwhile, boasting honeycomb, herringbone or diagonal weaves, was among the standouts at the show, as the brand ventures further into the sartorial department — all the way down to shirtings.

“Sartorial is important. We believe in it and it’s being well-received by the market. The idea is to utilize denim in areas where it hasn’t been used before,” noted Zampollo, pointing to the catwalks, where designer brands are setting trends with new denim styles, including three-piece suits.

“Comfort is the biggest thing, but tailoring is growing strong for us,” said Barbara Gnutti, export manager of I.T.V. “Denim is not a basic anymore, and it doesn’t always have to be knit. People are going back to raw and selvedge, in all types of blue. And it’s getting more luxurious. We also mix it with silk or use silver yarn,” she explained.

If Kingpins’ second annual Global Denim Awards was an indicator, sartorial is indeed having a moment.

This year’s prize, valued at 10,000 euros, or $11,000 at current exchange, went to Sartoria Diletto, a bespoke suitmaker from Milan. Diletto designed a collection, including suits, ties and overcoats, made of a new denim fabric developed by the Candiani mill especially for the occasion. Though 100 percent denim, it resembled cashmere, some of which was patterned thanks to a laser technique that required no washing and therefore no chemicals.