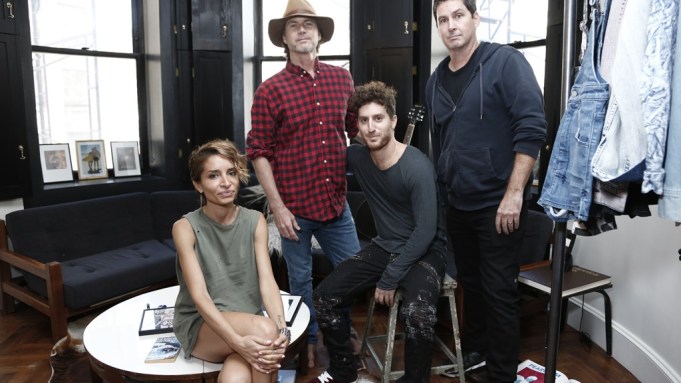 Cofounded in 1999 in Sydney by Dan Single, George Gorrow, Paul Wilson, Oska Wright and later, Gareth Moody — none of whom are presently associated with the brand, having moved on to other projects — the Australian denim and streetwear label developed a cult following for its irreverent, street-meets-surf sensibility, its distressed denim and its signature cross-stitch embroidered logo. At its peak, the brand was worn by the likes of Kate Moss, Madonna and Nicole Richie.

But Ksubi endured a roller coaster of legal and financial woes over the years, including a trademark infringement dispute in 2006 (in which the brand was forced to change its name from Tsubi to Ksubi), before entering into administration in 2010 and ultimately collapsing last December after failed rescue bids by former shareholder Harry Hodge and Bleach Group Inc. The brand shuttered its only international outpost — in Manhattan’s NoLIta neighborhood — back in 2010, and all six boutiques in Australia were closed in February 2013, along with its e-commerce site.

Now, after being acquired by the L.A.-based Breakwater Group in July 2013, the brand is getting its ninth life — with roots planted firmly in the U.S. Ksubi, which is relaunching for spring, will be produced and headquartered in Los Angeles by a small team: Michael Moshi, a longtime manufacturer specializing made in American production, as president; Eero Gathers, a denim designer veteran formerly of Seven For All Mankind and Genetic Denim, as design director, and Purdom Thomas, who spent five-and-a-half years on Ksubi’s U.S. staff as sales and merchandising director. Rounding out the sales team is Lisa Guadagno, as well as associate designer Jane Bang and longtime Ksubi creative Apples Ryan-Russo.

The consensus on Ksubi’s history among its newly appointed executives is that it was a fiercely hip and original brand riddled with mismanagement. “They were a bunch of wild, young Australians,” said Thomas of the brand’s original founders. “Ksubi came from the right place. It wasn’t some guy that sat down at his desk in his suit and tie and said, ‘I’m gonna build a $30 million brand.’ It was three friends that were interested in music, art, clothing — and then all of a sudden, a brand emerged. They found themselves on top of a brand that became very popular and grew very quickly, and they weren’t quite prepared for it. There was the pressure that came with the success. Sometimes when you have really great creatives, they’re not the best at business.”

“But you want that rebellious spirit in your jeans,” added Gathers. “That’s what denim’s about.” Gathers had been working at Koral, another L.A.-based denim brand, when he got the call from Moshi, and said he jumped at the opportunity to help revive Ksubi.

For spring, Gathers said to expect the same edginess that made the denim brand an originator in its time, but updated with new plays with color, patterns, shapes and materials. “It still walks with the same swagger, but it is grown up now,” he said. The hardware is brand-new from a German supplier, the denim is sourced from Italy and Japan, and the fits have been slightly reworked. The collection, which includes a variety of jeans, jackets, T-shirts and rompers for women and jeans, T-shirts and swim shorts for men, will hit U.S. retailers in February, with price points ranging from $120 to $280. Though Thomas declined to mention which retailers will stock Ksubi, he seemed eager to gain back their trust with a focus on quality and consistency.

“The buyers have given us all these analogies, saying, ‘I love Ksubi, but I went through all these ups and downs and I feel like I might be coming back to an abusive relationship,’” Thomas said. “And we understand those concerns. We explained to them that there were a lot of missing ingredients [in Ksubi’s past], and they’re seeing now that those ingredients are back in place. The reaction so far has been very, very strong,” he said.