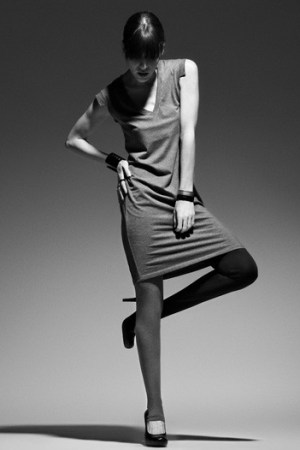 Merchants from Macy’s, Nordstrom, Holt Renfrew, American Rag & Cie, Amazon.com and a slew of specialty stores searched for upbeat trends and fanciful details, such as sequins, fringe, cashmere and fur, as they checked out the holiday collections at Designers & Agents, Brighte Companies and the showrooms in Cooper Design Space, New Mart and California Market Center.

Despite persistent worries about the economy, several retailers said they had survived the worst of financial travails to increase their orders from last year.

Wendy Foster, who operates four locations in the Santa Barbara, Calif., area described her mood as “wishful,” although she worried that her business wasn’t completely back on solid footing.

“It’s been a roller coaster,” she said. “As of today, the [Montecito] store is up 9 percent over last year for the month. Last month, we were down, and the month before we were up 50 percent.”

Overall, the exuberance of prerecession seasons hadn’t returned. Retailers were mostly buying close to season, trying to play it safe with designs that wouldn’t scare away shoppers and aiming for price points that would satisfy customers who remain tightfisted.

Lesley Grant, owner of home-based jewelry and gifts enterprise Rocket & Rosie in Dana Point, Calif., said her customers’ threshold for apparel purchases was $100. “The times, what they are right now, people are looking for nice quality for a good price,” she said.

The market was an opportunity for new lines to launch for the holiday season. Bliss Lau, the New York-based jewelry designer, unveiled goatskin leather wallets and handbags she designed for Dakota Collective, the higher-priced brand that’s an offshoot of young contemporary line BB Dakota. Wholesaling from $50 to $150, Bliss Lau for Dakota Collective consists of wallets with finger straps, bucket bags festooned with Lau’s signature chains and small cross-body bags slashed to reveal vents.

Designers did well with jersey and fleece basics that had a fashionable twist.

The Furies — a Venice, Calif.-based line launched by former Levi’s designer Rikke Korff this past spring — placed angular cap sleeves on a V-neck T-shirt dress and curved the hem on a tank top; both wholesale for less than $36.

Pete, also from Los Angeles, developed a new angora-Modal knit fabric for long-sleeve tunics and racer-back tanks wholesaling for less than $42. New York’s Foley + Corinna enhanced a $146 long-sleeve fleece shirt with a removable vest made of netting trimmed with feathers and beads.

“People have been investing in their staples in the last couple of years,” said Marco Lebel, vice president of sales at Robert Rodriguez. “Novelty and color are really the strengths right now.”

Deanna Vay, an assistant to the owner at Gracie & Co., a women’s clothing boutique in La Jolla, Calif., noticed a move toward luxury fabrics and detailing with sequins, fringe, cashmere and fur. “People are tired of being down and conservative,” she said.

Jean leggings and cargo pants topped the list of bestsellers for denim companies. It Jeans received favorable responses for its twill cargos retailing for less than $100, while Hudson Jeans pushed more edgy looks with harem cargo pants washed in an army green tint or trimmed with leather, retailing for $325 or $395, respectively.

ABS by Allen Schwartz confirmed the Army trend with military accents in cargo pants as well as narrow skirts.

Style New York updated classics to keep its missy clients happy while keeping retail prices between $30 and $110. “People are looking for colors, and trying to stay away from black,” said Tal Herzel, a sales representative for Style New York.

Among the 29 vendors at the Focus show was Ximena Valero, a Los Angeles-based designer who previously worked for Victoria’s Secret. She appealed to buyers with transformable pieces retailing from $120 for a tunic to about $450 for a long draped dress. Demonstrating the various adjustments on her own royal blue jumper, which morphed from a strapless dress to one with draped sleeves with a twist of a panel, Valero attributed her growing sales in Russia, Mexico and across the U.S. to the versatility of her designs. “There are at least 10 ways to wear each thing,” she said.