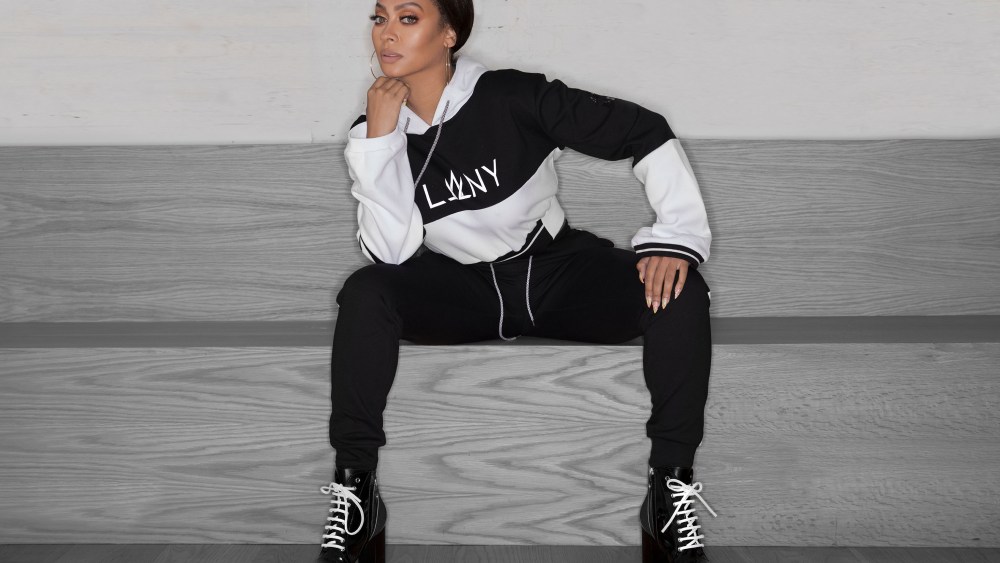 La La Anthony is teaming with Ashley Stewart, the plus-size retailer, to create a capsule collection that goes online today and will hit stores this week.

The 14 styles, chosen by Anthony, consist of dresses, jumpsuits, tops and bottoms, including denim, activewear sets and outerwear in sizes 12 to 32. The capsule retails from $78 to $120 and is available online and in 20 Ashley Stewart stores in New York, California, Georgia and Illinois. Ashley Stewart’s 89 stores primarily serve plus-size women within urban communities across the U.S.

Anthony continues to distribute her denim line, which is available in sizes 0 to 14, to Lord & Taylor but that deal is no longer exclusive. Ashley Stewart is Anthony’s first big partnership outside her L&T deal.

“I was noticing that a lot of curvy, beautiful women love the jeans and the denim line, and I thought why not partner with Ashley Stewart and come up with a great selection together?” said Anthony. She said she met with James Rhee, chief executive officer of Ashley Stewart, “and we just hit it off immediately, and we thought a partnership would be amazing, and that’s what we’re doing now, and what I’m so excited about.”

“He really believes in Ashley Stewart being more than just clothes, being a brand about women’s empowerment, and encouraging women to have self-esteem and live their life their way, and we just share a lot of the same goals and thoughts. It’s been a great collaboration,” she added.

Rhee told WWD, “La La and I got to know each other and she is everything our brand stands for. She’s multicultural and bilingual, a success in many different industries and she’s a good person, very humble and very accessible. She has friends who are many ages, ethnicities and styles.”

He described the relationship as ongoing and said there will be another La La Anthony line coming next year. “Our relationship with her is very broad,” said Rhee, noting that the company has a burgeoning media business, including Ashley TV. While he declined to reveal sales expectations, he noted that Ashley Stewart has had five consecutive years of double-digit profitability. Ashley Stewart Inc. is backed by The Invus Group, which bought a controlling interest in the company from Clearlake Capital Group and the FirePine Group in 2016. Rhee joined in 2013.

The theme for this holiday collection is “day to play to slay,” said Anthony. “It’s to take these clothes and utilize them in your day-to-day life, utilize them when you’re playing such as going out with girlfriends and going on dates, and when you slay, when you want to go to a party or club,” she said. The clothes can be casual or dressed up or down by simply adding a jacket or changing a shoe, she said. “Working women or people on the go, we don’t have time to go change our complete outfit. You want to keep going through the day,” she said.

When questioned whether the  plus-size market is getting very crowded with so many players such as Amy Schumer and Leesa Evans’ Le Cloud, which ranges from 0 to 20, Janie Bryant (JXB by Janie Bryant), Jason Wu for Eloquii, and 11 Honoré, among others,  she said, “For me, it doesn’t feel like that. The clothes [at Lord & Taylor] have done so well. People have really wanted these jeans. Women really like my clothes and have been asking for them.”

Anthony said she has no design background, but knows clothes and knows what she likes. “I know that people seem to look to me for style and like my style. I took that knowledge, and with my designer, really created a clothing line and a collection that I’m proud of.”

Has she found there are certain things the curvy woman requires from her clothing?

“I just feel like the curvy woman wants to feel sexy and beautiful and not feel that their style or quality is being compromised because it’s a bigger size. All women want to feel beautiful, no matter what your size is. No matter how up and down, or how curvy you are. At the end of the day, every woman wants to feel beautiful and I wanted to bring that into Ashley Stewart and not make anyone feel excluded for that,” said Anthony.

Even though she’s a size 6 in jeans, Anthony said she’s very familiar with the plus-size customer. “It’s a customer I feel I know very well. A customer that’s in my family, a customer who’s my friend. This is my life, that I’m around,” said Anthony.

Anthony said she’ll do an in-store appearance Dec. 22 at the Ashley Stewart store at 216 West 125th Street in Manhattan to launch the collection.

While the focus of the line is denim, there are vegan leather jackets, stretch knit dresses, and jumpsuits.

As for her other projects, Anthony said she’s currently filming her TV show, “Power,” on the Starz network, where she’s a series regular. She’s also working on her charity event,  the third annual holiday charity event benefiting Girls Inc. of New York City and The Police Athletic League of New York City. Ashley Stewart is a supporter and financial sponsor of Anthony and this year’s Winter Wonderland, which will take place at the Gauchos Gym in the Bronx.

Eventually, Anthony said she’d like to build out more categories under her name.

“I am looking to expand, but I’m all about being really great at one thing before you move to the next. This partnership with Ashley Stewart, I have high hopes for it. I want to get this off the ground and ultimately the idea would be to expand to other categories such as accessories, shoes, all that stuff,” she said.