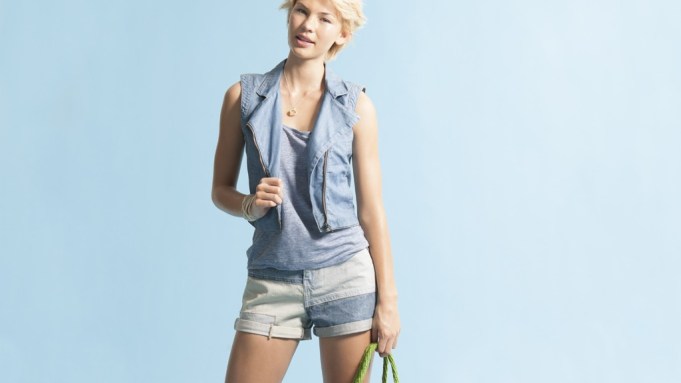 Leon Max might finally be on his way to establishing a jeanswear business.

The Russian-born designer, who formed Max Studio in 1979, is best known for his ready-to-wear and has built an international fashion business that has a substantial retail and wholesale presence throughout North America, Europe and Asia. His Sophie Max by Leon Max collection is one of the few designer collaborations offered by Belk Inc.

But denim has been a bit elusive for Max. “I’ve always felt that it was important,” he said. “Some attempts were made over the years but never a deep assortment of washes and silhouettes.”

That appears likely to change now that New York-based EZ Apparel LLC has taken over the license for Max Jeans in the U.S. and Canada, with plans for a spring 2014 arrival at retail. In March, less than a year after Max had licensed Salt Jeans to handle the category, EZ founder Gabe Zeitouni acquired Salt for an undisclosed sum and began to integrate it into EZ’s operations. Max liked the direction Zeitouni was proposing for Max Jeans and assented to the license’s transfer.

Sara Hong, who’d been president of Salt, came along with the deal and now serves as president of sales for Max Jeans with responsibility for both sales and production.

Hong noted that the collection will be made entirely from stretch fabrics and incorporate prints, patterns and finishes such as shimmer, textures, embroidery, wax coatings, flocking and vegan leather in a variety of colors.

“The focus is on providing the customer — generally 28 to 45 years old — with items that have great quality and detail while maintaining affordable prices, ranging from $29.99 to $89.99,” Hong said. “We want Max Jeans to be a staple in every woman’s closet.”

Silhouettes include the market’s current staples — an updated boot cut, skinny and relaxed boyfriend. Rounding out the line are fashion pieces such as a vegan leather moto jacket, zip vests and patchwork shorts.

In addition to Max’s retail network — there are about 100 stores, about half of them in North America — Zeitouni is aiming to place the product in department stores like Macy’s and Dillard’s, and then expand to better specialty stores as volume builds next year. Within the department store arena, he expects placement in the contemporary area alongside brands like Michael Kors and DKNY.

Initial shipments are scheduled for holiday, with a full launch for spring and e-commerce set to go live at max-jeans.com Aug. 26.

The commitment to Max is another step in EZ’s continuing evolution, begun in 2009, from third-party supplier to wholesalers and retailers, to a company that aspires to do about half its business in branded wholesale within the next few years. The company continues to supply private-label jeanswear and other sportswear to retailers but has built a brand portfolio that includes Vintage Denim and Essentials NY, which houses a group of urban brands including licenses for Baby Phat, Fly Society and Coogi.

As for Essentials, Zeitouni is nonplused by the generally moribund state of the urban market. “We actually have a little bit of extra breathing room in urban because consumers don’t have a lot of places to go,” he told WWD. “We’re thriving in a contracting marketplace.”

EZ’s 12-year history as a private-label supplier has paid dividends as it’s morphed into a branded company, and now the stage is set for its introduction of designer-name jeanswear.

“You look through what’s happened with premium and designer jeans and the first thing you know is that you have to have a great fit,” he said. “As a private-label producer, we’ve developed models that really fit the customer. In a market like we’re in, where surface interest is key, you have to have a handle on that too, so you can differentiate yourself from the world of the basic, dumb five-pocket jean. The market is looking for inspiration right now and we know we have to provide it to make this work.”