Exec Maurizio Donadi says aims is to "conquer a piece of the market that Levi’s has struggled to reach." 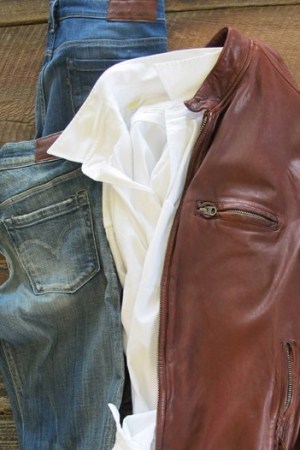 Established a year ago, the division soft launched a new premium denim and sportswear label globally last spring, called Levi’s Made & Crafted, with a full rollout coming for fall. Additionally, the existing Levi’s Vintage Clothing label, which offers high-end replica designs from the company’s archives, was expanded into a more comprehensive collection this year.

“The aim of this division is to conquer a piece of the market that Levi’s has struggled to reach, with truly premium, elevated product,” said Maurizio Donadi, global senior vice president at Levi’s XX. “This is something that is very dear to Levi’s, and we want to become a big player in the premium market. We are bringing some of the romance and poetry of denim back to the Levi’s brand — the brand that invented the blue jean.”

The Levi’s Made & Crafted label effectively replaces the Levi’s Capital E business, which was the premium label offered in the U.S. from 2006 to the end of last year. Overseas, Levi’s Made & Crafted subsumes a number of different premium ranges. The move represents Levi’s efforts to consolidate and focus its premium offerings under one global label as the brand works to expand its foothold in a market where it faces a raft of trend-savvy competitors such as Seven For All Mankind, True Religion and Diesel.

The label will be in 62 North American men’s accounts and 178 men’s doors this fall, including Barneys New York, Bloomingdale’s, Saks Fifth Avenue, American Rag, Sharon Segal at Fred Segal Santa Monica, Scoop and Steven Alan. In women’s, it will be in 53 accounts and 90 doors (73 percent of Levi Strauss & Co. business was in men’s last year).

Barneys was among the stores to launch Levi’s Made & Crafted last spring in all 28 doors. “Capital E was a strong performer for us, and this was a business we really wanted to protect. It was essential that Levi’s be part of our matrix. It’s one of our biggest brands in denim,” said Samantha Carter, the retailer’s associate buyer for men’s denim. “The washes are clean, the pocket treatments are clean and we’ve had a very positive reaction to the line.”

Barneys also launched the newly expanded Levi’s Vintage Clothing collection in eight doors in the spring, and is betting bigger on that business for fall, bringing it into 24 doors.

Launched in 1999, Levi’s Vintage Clothing is a true boutique business, offering authentic reproductions of historic Levi’s styles from as far back as 1890, right down to their period labels and packaging. Prior to this year, the collection was highly limited in scope and distribution, with almost all the emphasis on bottoms. For fall, the offerings have more than tripled to about 170 stockkeeping units, including jackets, shirts, knitwear and wovens. “It’s a true wardrobe now,” explained Donadi. “But it will remain a jewel of a business. It’s not about volume.”

For the North American market, both Levi’s Vintage Clothing and Levi’s Made & Crafted are sold out of the independent Namaste showrooms in New York and Los Angeles, headed up by David Coury. Neither line will be sold out of any of Levi’s own U.S. retail stores this year.

Levi’s XX is a division of Levi’s Europe for financial accounting purposes, but services the company’s global regions. Japan is the division’s largest market, followed by the U.S., the U.K. and France.