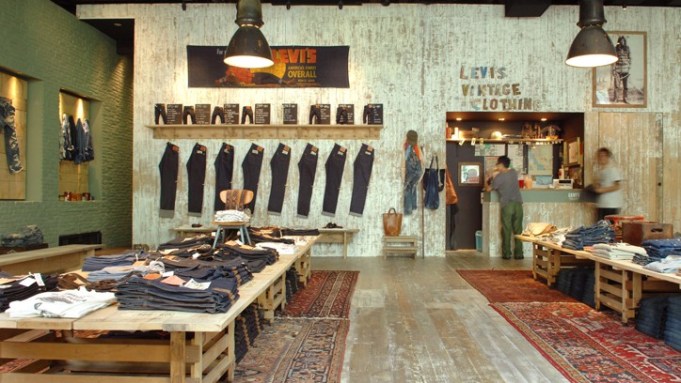 TOKYO–Levi’s is hoping to win over Japan’s most discriminating vintage consumers with a new store concept featuring a mix of authentic and replica pieces from the jeans maker’s vast archives back in San Francisco.

The new Levi’s Vintage Clothing Store, located in the Aoyama district near Dries Van Noten and Stella McCartney, has a rustic, old frontier feel to it. The 1,614-square-foot space features whitewashed and sanded wooden floors and brick walls. An old army cot supports a display of folded flannel shirts while other merch rests on shelves made from slats of wood. It opens to the public on Friday.

Replicas of eight models of Levi’s 501 jeans, ranging from 1890 to 1966, hang from hooks in one wall. Duplicated down to the last back pocket stitch, each model is available for purchase for 29,925 yen, or about $350. The store also sells a selection of non-Levi’s products like used college sweatshirts and- on the upper end of the price spectrum- a beat up horsehide car coat for 124,425 yen, or $1,457, from SoHo boutique What Goes Around Comes Around.

Maurizio Donadi, global senior vice president of the company’s one-year-old premium subsidiary Levi’s XX, said the mix is only natural. He gestured to his own look on the day of a press preview for the new store: a Sixties-era denim button down shirt from Sears paired with prototype jeans from Levi’s.

“We are… scientists who look at clothing with a microscope instead of designing a new silhouette,” he said.

The new store replaces Cinch, a Levi’s premium brand concept store that occupied the space for about two years. At one point the company had another store, also called Levi’s Vintage Clothing, in the same Aoyama neighborhood. It has since shuttered. But Donadi stressed that the new store has a completely new articulated design and merchandising mix.

Over the past six months or so, smaller versions of revamped Levi’s Vintage Clothing stores rolled out in Milan, Paris and London but Donadi specified that those locations carry only the new, replica products and not actual vintage items, he explained.

“[The Tokyo store] is a concept that Levi’s has never done before, to mix the vintage and the new,” he said, specifying that the store is almost entirely men’s apparel and accessories with a smattering of women’s and unisex items tossed in for good measure. “This format is the first one in the world.”

Donadi declined to give a sales forecast but allowed that Japan is the largest market for the newly formed Levi’s XX, which is based in Amsterdam. He admitted that market conditions here are tough for apparel but he said he thinks the new store will help Levi’s reposition itself in the higher-priced segment of the denim market.

The executive, who sanded the floors of the Tokyo store himself, said other stores like this one could work in Europe and New York but it’s important to keep the number limited.

“This is a special thing,” he concluded.