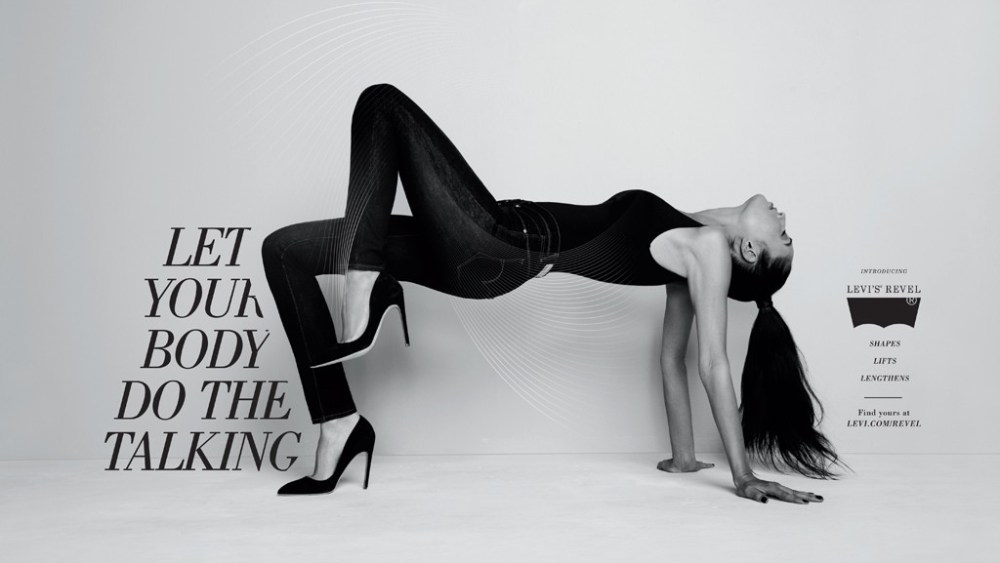 Levi’s has a sexy new pitch for women in its Revel line of body-shaping jeans.

The San Francisco-based denim giant will introduce its latest fit advance at retail next month, touting Revel’s patent-pending “liquid-shaping technology” that promises to mold the wearer’s assets into a shapelier, leaner and more sensual form. The product, which essentially marries the idea behind Spanx to high-concept jeans, will debut on levi.com on Aug. 4 and roll out to Levi’s stores in the U.S. and more than 30 international markets through the month, supported by a global marketing and advertising campaign.

Revel builds on the shape-defining platform Levi’s established with its Curve ID label in 2010, which offers fits based on the actual shape of a woman’s body — such as slight, demi or bold curves — rather than just traditional waist and inseam measurements. Over the past three years, Levi’s has sold more than eight million pairs of its Curve ID jeans, which are priced higher than core Levi’s product at $78 to $98.

To fulfill that lofty promise, Levi’s starts with a four-way stretch fabric comprised of cotton, polyester, Lycra and DuPont’s Sorona fiber. It then prints a proprietary liquid chemical formula on the fabric interior that regulates the level of stretch in strategic areas, providing structure, support and a figure-hugging shape to the jean, rather than simply uniform stretch. “It controls the stretch in those areas, much as compressionwear does. But rather than using visible reinforced panels, we use the application of the liquid-stretch technology,” explained Guenza. “The result is a jean that carves out the inner thigh, slims and smooths the outer thigh, lifts the seat and flattens the tummy.”

It’s the “secret sauce” of the liquid-shaping technology that Levi’s says differentiates Revel from existing brands like NYDJ, which also promise to lift and shape the legs and butt. NYDJ uses patented crisscross panels on the jeans’ interior and generally targets an older demographic than the one Levi’s is aiming for with Revel.

In addition, Levi’s Revel incorporates artfully engineered seams and contoured finishing details, such as whiskering, to heighten the effects of its shaping technology, a device inspired by the beauty arena. “We looked at [late makeup artist] Kevyn Aucoin’s books and how he made cheekbones look higher or noses look smaller,” said Guenza. “The seams we applied to our jeans act in concert to make the leg look longer and slimmer, the seat perkier and to move the eye away from the hips.”

Revel jeans will be available in skinny and straight styles across the three Curve ID fits in a range of indigo and black washes. Prices range from $98 to $128, positioning the line above the core Curve ID offerings.

Revel will be sold only in Levi’s stores at launch in order to provide a high level of customer service and information to shoppers considering the new product. Distribution in the U.S. is planned in 39 of the 40 full-price Levi’s stores here. (The exception is the Castro Street unit in San Francisco, which is men’s only.)

Overseas, Revel will be sold in about 750 stores, with a strong focus on China, India, Japan, South Korea, Russia and France. Levi’s will stage a press event in Shanghai in early August for editors and tastemakers across Asia to launch Revel in that region. Other markets in the rollout include Turkey, Poland, Italy, Spain, Mexico and Australia.

An advertising campaign under the tag line “Let your body do the talking” will break in August magazines including Cosmopolitan, InStyle, Glamour, Self, Lucky, People Stylewatch and Essence. A video component will live online on sites like LookBook, PopSugar and Daily Candy, as well as via Levi’s outreach to bloggers, said Alderete.