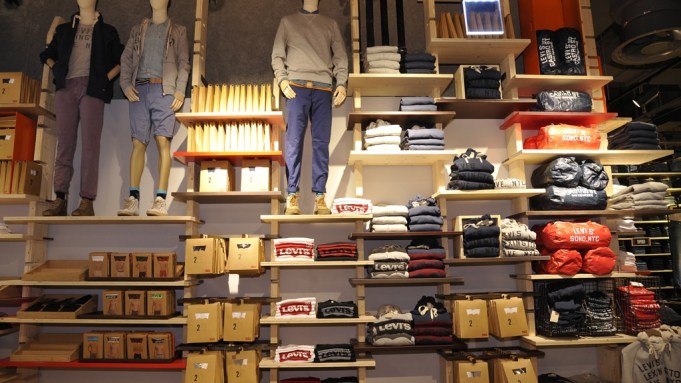 PARIS — Avenue des Champs-Elysées has gained a new American resident, with a sprawling Levi’s flagship set to open there at the end of this week.

Since 2010, Banana Republic, Tommy Hilfiger and Abercrombie & Fitch have all opened stand-alone units on the tourist-packed avenue.

The denim giant is no stranger to France, however, with 22 stores in Paris alone.

“France is one of our biggest markets worldwide. It sits in the top 10 of all our markets,” said Erik Joule, senior vice president of global merchandising and design at Levi’s.

The 7,000-square-foot store will be the brand’s fourth flagship worldwide, with others located in San Francisco, where Levi’s is headquartered, New York and London.

Designed by French agency REV Architecture, the three-story site has an industrial feel, with retro lighting, a ceiling network of metal rails for hanging product and vintage wood and metal merchandising tables and trolleys stacked with product. “We walk a careful balance between the authenticity and history of the brand and the current and future,” Joule said.

The layout is designed to direct the flow of traffic to the basement, where most of the brand’s clothing lines are stocked. These include the Red Tab line, Waterless, Made and Crafted and new Commuter collection, specifically made for cyclists. The downstairs space boasts a giant denim wall.

The site’s upper floor stocks items from the brand’s Vintage Collection and is also home to its Tailor Shop, where customers can have jeans customized.

“Most of the customers’ activity will happen downstairs, while the other levels will be more interactive, the opportunity for the brand to display products with art. We have collaborations with artists that come to life in different parts of the store,” Joule said. The store’s main wooden staircase, for instance, will double as a theater for film screenings by artists in the basement.

French artist Pedro Winter and American musician James Murphy are slated to perform on the opening night on May 10.

Their collaboration also involves a limited-edition line of T-shirts and trucker jackets, exclusive to the Paris store, and sculptural installations for windows.

This will kick off the collaboration series, to be followed by another trans-Atlantic collaboration between graffiti artists André Saraiva and Shepard Fairey, set to launch on June 14.

Keen to kindle Franco-American relations, Levi’s is using the motto “Vive les Friends” as a general tag line to mark the opening. It is heralding the store’s arrival with an outdoor ad campaign on bus shelters, tourist buses, subway stations and via social media platforms, set to launch on May 15.