Lucky Legend will have four collections a year. 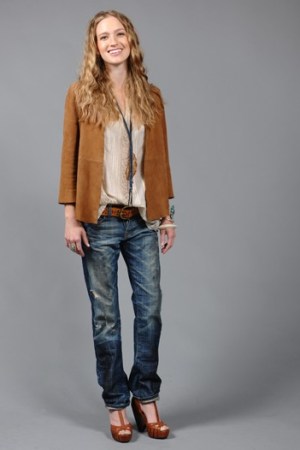 VERNON, Calif. — Lucky Brand is creating a more diversified range as a platform to a major expansion of its higher-priced Lucky Legend line.

Launched four years ago with retail prices starting at $119, Legend had until now been reserved for Lucky’s premium jeans made of selvage denim with elaborate, costly washes. The expanded line bowing for fall offers 20 styles each for men and women. Retail prices for Legend range from $168 to $248 for men’s jeans, $148 to $198 for women’s jeans, $98 to $398 for women’s sportswear and jackets, $68 to $798 for men’s sportswear and outerwear and $45 to $95 for accessories. Made primarily in the U.S., Legend plans to offer four collections each year. In comparison, Lucky’s main line, which is manufactured mostly overseas, ships a new collection each month and costs at least 15 percent less than Legend.

“This is the first time we have more than denim pieces [in Legend],” said David DeMattei, Lucky’s chief executive officer. “It lets us experiment with price points. It lets us see where we can go with it. Eventually, it can be a store, which is what I’d like to see with it.”

Although DeMattei didn’t provide a timeline, he said New York and Los Angeles are the leading candidates for locations of the first Legend stores. Lucky will test Legend this fall in the top five stores among its 183 full-priced units. The shops launching Legend are located in the Westfield Century City Shopping Mall in Los Angeles; King of Prussia Mall in Pennsylvania; Westchester Mall in White Plains, N.Y., and on Broadway and Prince Street in New York. By next spring, Lucky aims to widen the distribution of Legend to its top 50 freestanding stores and wholesale accounts.

DeMattei declined to forecast sales for Legend. Owned by Liz Claiborne Inc., Lucky reported that sales fell more than 10 percent to $275.8 million in the first nine months of 2010 from a year ago.