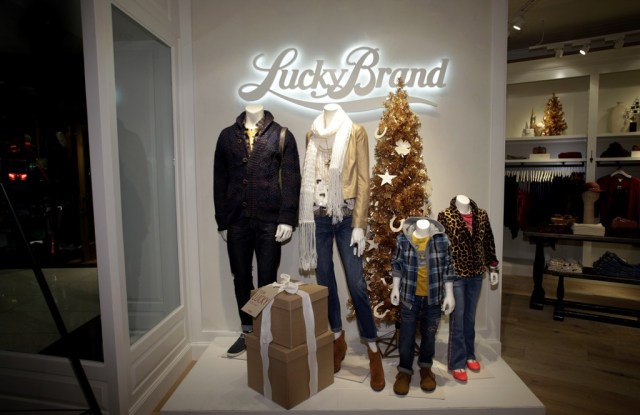 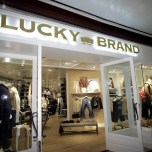 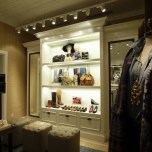 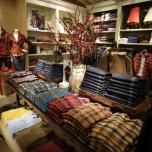 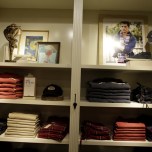 Aesthetically distinct, the two stores — a 1,350-square-foot outpost on Abbot Kinney Boulevard and a 2,500-square-foot unit in The Shops at Columbus Circle — showcase the versatility of the Fifth & Pacific Cos. Inc.-owned brand. The Los Angeles store underscores Lucky Brand’s California roots, while the New York one points to its future as an expansive lifestyle brand.

At about 1,000 square feet less than Lucky Brand’s customary retail footprint, the Los Angeles space in the Venice neighborhood compelled the company to distill its assortment to an edited array of select merchandise in an intimate setting. Designed completely in-house, the store has a beach house vibe with whitewash and driftwood details, a patterned wood mosaic on two walls and a floating shelf system.

Patrick Wade, executive vice president and creative director of the Los Angeles-based firm, said, “It’s an ideal location for our customer. We really think it’s our brand: very casual, very California, very relaxed. We’ve always talked about Venice as a perfect example of what our lifestyle is.” Chief executive officer Dave DeMattei chimed in: “It’s going to be an experimental store. It’s a business proposition. It’s in our backyard so we can play with it, and it allows us in smaller square footage to try and create more of the boutique feel.”

Wade described the New York store as on the “total other end of the spectrum as far as what we’re doing in store design.” Developed with Michael Neumann Architecture, Lucky Brand set out to create an elevated presentation of its offerings at the store befitting its uptown Manhattan audience. The storefront is covered with ivory tiles and contains neon signage, and the interior has leather seating, an antique mirrored cash wrap and Phillip Jeffries wallpaper. The soft color palette, accented with seafoam green and sage, connects the store to its Venice counterpart.

Lucky Brand emphasizes the brand’s strength in denim and its push into accessories at the New York store. For the first time, the fitting rooms are located at the center of the store alongside the men’s and women’s denim selections. “It’s all about trying on your jeans and having the whole core of the store be about denim, which we hadn’t ever laid out in that way and is a big idea,” said Wade.

The store also marks the debut of dedicated areas for accessories and shoes, items that had previously been housed in fixtures throughout stores, but were never given their own destination within one. “These things define us as a lifestyle brand. We’re not just a denim brand,” said Wade.

The stores are evidence of the transformation of Lucky Brand that started when DeMattei and Wade joined in January 2010 and launched efforts to reinvigorate the company as a fashion player. DeMattei said the introduction of superstretch denim for women and the marketing of its use of supersoft Italian fabric in men’s denim moved the needle in that direction. “We couldn’t sell a skinny [jean] two years ago, and now it is 40 percent of the business, and I’m proud of that,” said DeMattei, adding, “Lucky Brand is more relevant. We’re playing in the fashion game now, which really wasn’t happening for quite a while.”

There’s still a lot to be done. There are 175 full-price and 50 outlet stores, but DeMattei estimated Lucky Brand can have 215 full-price stores and 75 to 100 outlets in the U.S. Next year, the brand plans to open 12 to 15 stores between outlets and full-price units. Lucky Brand has refreshed roughly 65 stores this year, and expects to refresh 20 to 25 stores next year. The brand’s direct-to-consumer business accounts for about 65 percent of its revenues. Some 35,000 pairs of jeans are sold weekly in the company’s direct-to-consumer segment.

Lucky Brand’s recent performance has made the brand bullish on retail. Through September, it registered 20 consecutive months of same-store sales gains. Last year, Lucky Brand’s total net sales increased 8.1 percent to $418.2 million, and its comparable direct-to-consumer net sales leaped 15.6 percent. The same year, the firm generated $420 in sales per square foot at its stores, up from $365 the year before. In this year’s third quarter, sales rose 11 percent to $112 million, with sales per square foot up to $461 for the trailing 12 months.

DeMattei and Wade believe strongly that catalogues have helped drive retail sales. In the spring, the brand will release a 64-page catalogue in addition to the standard 32-page edition. The brand mailed eight million pieces in 2012, including postcards and catalogues, up from four million the year before. The response rate from the mailings was around 4 percent and orders from responders were 14 percent higher than the average Lucky Brand customer. “We’re elevating the photography, the people we’re working with, the models, really building the book out to be a real proper catalogue,” said Wade.

Lucky Brand has signed David Gandy, who was in its spring and fall campaigns this year and has a prominent presence in its catalogues, to a deal that makes it the only North American denim brand to work with the model. Gandy will be featured in Lucky Brand’s spring and fall 2013 ad campaigns. “We really think he is the perfect guy for us. He’s a real man. He’s not a skinny, high-fashion model. Our customer relates to him,” said Wade.

DeMattei has stated that his objective is for Lucky Brand to reach $1 billion in total sales and generate $600 in annual sales per square foot within its stores. That goal “seemed like a big stretch when we got here and now it’s in sight,” said DeMattei. To get there, he said, “We have to continue to grow denim, and we have to find classifications besides knits and wovens to grow and that’s what we’ve embarked on.”