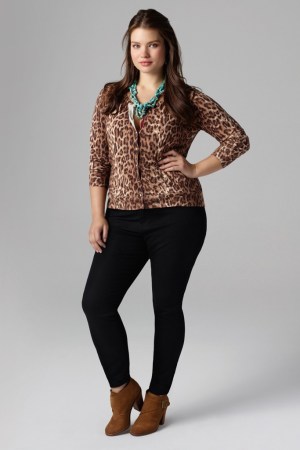 In its first attempt to design plus-size clothing, the Los Angeles-based denim company is unveiling a line of tops under the Lucky Plus brand and a new jeans fit dubbed Ginger. Priced similarly to the main line, the Ginger jeans will retail from $99 to $129, and Lucky Plus’ T-shirts, knits, woven shirts and sweaters will sell for between $49.50 and $119.

“We see there is a void in the market,” said Lucky chief executive officer David DeMattei, adding that one of Lucky’s goals is “to be a very democratic brand.”

Unlike the strategy it adopted for its higher-priced brand, Lucky Legend, which is sold only in its freestanding stores, Lucky Plus and the Ginger jeans will launch in July at wholesale accounts including Nordstrom, Macy’s, Von Maur, Lord & Taylor and Belk.

“We showed them initial sketches,” DeMattei said. “These were the ones who had strong responses to the product.”

Targeting the plus-size market could give a boost to Lucky’s parent company, New York’s Fifth & Pacific Cos. Inc. Despite higher sales from divisions such as Lucky and Kate Spade, Fifth & Pacific said revenue decreased 6.4 percent to $1.52 billion last year from a year ago, as it saw weakness in its Juicy Couture unit. In the first quarter ended March 31, the company trimmed its loss by about a third, to $60.6 million, as sales exceeded expectations despite a 4.1 decline to $317.1 million. Lucky’s revenues picked up 20.3 percent in the quarter, to $100.4 million, as its operating loss narrowed to $15.4 million from $16.2 million. Its share of corporate revenues grew to 31.7 percent from 25.2 percent in the prior-year period.

Declining to estimate sales for the plus-size business, DeMattei said the initial rollout will go to 118 doors, out of the 600 locations that carry Lucky’s women’s line. Lucky’s plus-size grouping also will get shops-in-shop in Macy’s stores such as Herald Square in New York and Fashion Valley in San Diego. Specialty stores and Lucky’s e-commerce site will begin selling the plus-size offerings for the holiday season. DeMattei said Lucky’s own stores, which totaled 178 as of March 31, excluding outlets, won’t carry the plus-size offerings due to their relatively small size, on average, of 2,400 square feet.

With Americans continuing to get larger and heavier — the Centers for Disease Control and Prevention estimates that more than one-third of American adults are obese — plus-size apparel has developed into an increasingly competitive, complex niche market. In a survey conducted last August by London-based market research firm Mintel, 68 percent of adult women in the U.S. said they normally buy clothing sized 14 or larger. Some 38 percent said they’ve spent $100 or less on plus-size clothing in the last 12 months, while 30 percent said they’ve spent $100 to $249.  Among the teenaged girls who were surveyed, 60 percent said they have shopped for plus-size clothing in the last 12 months, preferring Target, Kohl’s, J.C. Penney, Forever 21 and other stores where their peers go. Eighty-eight percent of the teens said low prices are important when shopping for clothing.

Lucky is the latest player designing plus-size fashion. Last October, The Limited launched a new division called Eloquii by The Limited that caters to full-figured women. Full Figured Fashion Week, which started four years ago, marked its latest New York edition earlier this month with a runway presentation featuring plus-size looks from designers including Michael Kors, Ralph Lauren and Elie Tahari. Meanwhile, plus-size specialty stores have consolidated, with Avenue preparing to close about one-quarter of its nearly 400 units in the wake of its bankruptcy and acquisition, and Ascena Retail Group moving to close Fashion Bug since it acquired Charming Shoppes Inc.

Lucky’s new Ginger jeans are all cut out of stretchy fabric with a midrise and contoured waist in three leg openings: skinny, straight and boot. The denim treatments range from dark indigo and cornflower blue to black and colored corduroy. While Lucky offers size 16 jeans in its stores and size 18 online, the new Ginger fit will be available in sizes 14 to 24 and Lucky Plus will be sized 1X to 3X. Melding Lucky’s denim heritage with Bohemian styling, the 75 pieces in Lucky Plus’ debut collection include crochet peasant blouses, asymmetric sweater coats, leopard-print cardigans and minimalistic jean jackets. As Lucky plans to build a plus-size lifestyle brand, the holiday collection would expand into pull-on leggings, a glitter finish and dresses.

“We want to be fashion-right,” said Patrick Wade, Lucky’s creative director. In other words, the design directive for the plus-size clothing was “give her something that’s fun to wear and give it a lot of attitude,” he said.