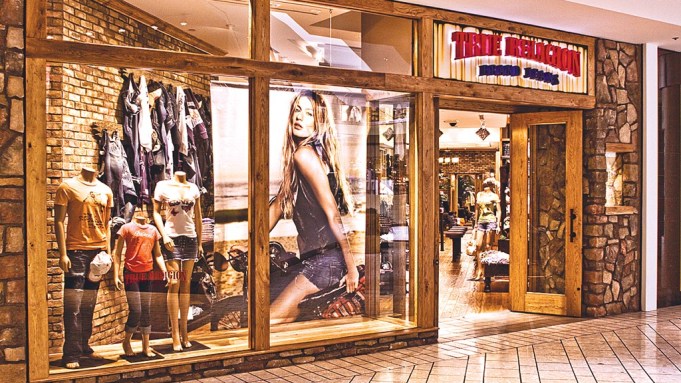 Mergers and acquisitions activity in the denim sector is on pause — but the fashion trend for fall could restart it.

There’s only one brand known to be currently on the market, True Religion. While some buyers are keeping tabs on Lucky Brand just in case, they could have a long wait as Fifth & Pacific hasn’t said officially whether a sale of the brand is even under consideration.

Given current market trends in denim, taking a step back to eye the landscape isn’t necessarily a bad move. A focus away from colored denim and back to darker washes could stir up interest again in brands that have in the past tested the M&A waters: Citizens for Humanity, Hudson Jeans and Not Your Daughter’s Jeans.

In the case of True Religion, market sources say they expect the firm will give newly named interim chief executive officer Lynne Koplin time to make some changes and get more turnaround traction at the firm. She retains the post of president.

The company said on March 19 that Jeffrey Lubell had stepped down as chairman, ceo and creative director. He now serves as chairman emeritus and creative consultant for a period of two years. Koplin joined the firm as chief operating officer in 2010 and became president in 2011.

Executives in the denim space noted that Koplin is a capable executive who has made some good decisions that were sometimes overruled by Lubell.

But there’s still an open question about how long Koplin will stay at the denim company. According to a Form 10-K filing with the Securities and Exchange Commission in March, Koplin’s employment agreement was extended to June 1 from April 1. In a Form 8-K filed with the SEC in December, the previous extension was also for a short time period — from Jan. 1 to April 1.

William Susman, an investment banker and founder of boutique advisory and research firm Threadstone Partners, said, “With an interim ceo in place, the company is probably less embracing of a transaction and more eager to fix the business with a new team. It’s also hard to hire a new ceo and sell the company at the same time.”

When it was announced that Lubell left, the True Religion board reiterated that the process of reviewing its strategic alternatives “is ongoing.”

There’s been speculation that with the company’s founder out as ceo, it would make the firm an easier sell since Lubell is known for his sometimes confrontational style of leadership.

According to Brean Capital analyst Eric Beder, now that the “potential issue of Jeff’s severance/desire to stay on post-transaction is settled, [we believe] that the odds for a sale of True Religion have increased and the way is clear for a new buyer to install (at a much lower cost) their own management team if they desire.”

While Lubell’s presence made it somewhat difficult to get a sale done, that hasn’t been the only stumbling block, according to investment bankers.

One banker who requested anonymity said two private equity buyers dropped out because the “price was too high.”

While Warnaco was said to have been the strategic buyer eyeing True Religion, it has since been acquired by PVH Corp. PVH at the moment is believed to be focused more on integrating its latest acquisition than on eyeing a new deal.

An investor in True Religion said that private equity firms were likely to pay a per-share price in the low-to-mid $30 range, with strategic firms potentially more likely to be willing to pay in the mid-$30s.

How a brand is positioned, and its success in that positioning, in turn impacts how much a buyer is willing to pay. While Citizens and Hudson are premium fashion denim brands, True Religion and Lucky Brand are both positioned as lifestyle brands. True Religion, in particular, has had its share of hiccups. If the brand can show continued strength in its turnaround efforts, particularly showcasing merchandise offerings that consumers want, that would support a higher valuation and ultimate price tag.

When True Religion posted fourth-quarter results on Feb. 6 for the three months ended Dec. 31 — a 4.6 percent decline in net income to $13.8 million, or 53 cents a diluted share, on a 14.8 percent gain in revenues to $137 million that still managed to beat Wall Street’s estimates — Lubell at the time said that the plan was to “enhance our men’s merchandise offering with sportswear innovation and reestablish the True Religion Brand Jeans women’s collection with updated, well-edited core basic denim bottoms and fashion-forward concepts.”

According to Andreas Kurz, president of consulting firm Akari Enterprises and former ceo of Seven For All Mankind, it can be difficult to evolve a denim-focused brand into one with a lifestyle positioning. Seven is now owned by VF Corp.

“Most times it doesn’t work. Even at Seven, we had a really hard time expanding into other categories…. With apparel it made sense. You can go into outerwear, jackets and casual apparel. Once you go into [non-apparel] categories, [it can be] difficult to translate the jeans image,” Kurz said.

Kurz also explained that denim firms, many of which are based in Los Angeles, have almost everything close by, from production to sourcing. When companies start moving to sportswear categories that involve overseas production, issues from sourcing in China to quality control are typically outside of the firm’s core expertise.

For now, playing the waiting game could work in True’s favor: Kurz said that he’s seeing a greater emphasis in the premium denim offerings centered on vintage washes and different surface treatments.

Rebecca Duval, an analyst at BlueFin Research Partners, said, “For fall, I see a much cleaner trend in denim, with indigo coming back in a big way around the back-to-school season. All traditional denim brands will get a boost. Brands such as True Religion, Citizens of Humanity and Hudson Jeans will get a part of the upswing, as will J Brand and Lucky Brand Jeans.”

According to Janki Lalani Gandhi, a vice president at the investment banking firm The Sage Group, which represented Paige Denim when it sold an investment stake to TSG Consumer Partners, people “are being a little more safe with prints. They are sticking to what has worked in the past, versus being overly experimental.”

At the Moda Manhattan show at the Jacob K. Javits Convention Center and Pier 91 in New York last month, sales representatives for Not Your Daughter’s Jeans showcased darker washes and coated denim, featuring a wax finish. The company had tested the M&A waters in 2011, but has since been taken off the market.

Market and financial sources speculate that if Berkshire Partners, which own Citizens, and Fireman Capital and Webster Capital, which own Hudson, were to eye exit strategies down the road, a fashion season where traditional denim is once again at the forefront could help stir investor interest, boost valuations and trigger some M&A activity in the sector.