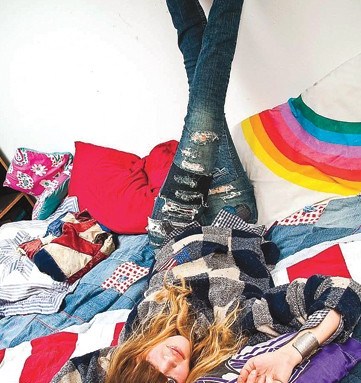 Junior denim companies are making the most of technology and recruiting the latest crop of rising stars to appeal to fickle but savvy young customers. Here’s what they’re doing.

Claim to fame: One of the original “heroin chic” poster girls for Calvin Klein in the Nineties, the singer-songwriter leads a rock band called RTX — when she’s not producing records for the Kills and lecturing on Southern rock at Princeton University.

What it’s doing: The Los Angeles-based denim brand hired Entertainment Fusion Group and SumCreative to concoct a Web-centric campaign featuring an iPhone app, a heart-shaped digital photo frame and a Web site ﬁne-tuned for mobile phones. It’s also including “quick response” bar codes on print ads, billboards, hangtags and taxi rooftop ads that consumers can scan with their phones to be directed to a short Web ﬁlm. EFG, also based in Los Angeles, paid celebrities such as Holly Montag and Monique Coleman to send out posts via their Twitter accounts incorporating the campaign’s tagline, “Do you miss me?” to more than 319,000 followers.

Buzz: “Chances are the 15-, 16-, 17-year-old girl in Texas is going to spend more time on Facebook, Twitter and her mobile phone than picking up a magazine and reading it,” said Peter Philipp Wingsoe, managing director for EFG’s digital division. “We thought this [marketing campaign] would be great, especially for this speciﬁc demographic.”

Results: When the $100,000 six-month campaign kicked off in August, Miss Me counted some 70,000 Facebook fans. As of Oct. 28, the number of fans totaled 122,740. There was a 7 percent click-through rate for the link highlighted in the celebrity tweets, Wingsoe said. In comparison, online ads on social networking sites usually get a 1 percent click-through, he said.

Why Wall Flower picked her: “This girl is all over the place,” said Stephen Mamiye, vice president of Wall Flower. “She has a great edge and a strong sense of style.”

Why it’s OK not to be a wallﬂower: “The shoots that we are doing are very, very rebellious in the sense of weirdness,” Hyland said, explaining why she screamed at the top of her lungs on the photo shoot. “It’s OK to be you and be conﬁdent in that.”

What it’s doing: The City of Commerce, Calif.-based company took over a Jumbotron in New York’s Times Square in July to broadcast a video of 11 high-school girls demonstrating how to wear its new capris with removable legwarmers.

Buzz: “A lot of the kids go out and say, ‘What is this? This is funny-looking,’ ” said Alden Halpern, chief executive ofﬁcer of Tyte’s parent company, 4Whatitsworth Inc. “That’s a new thing we have going on right now: educating people about a new product.”

Results: Tyte is planning a repeat performance in Times Square for Christmas.

Claim to fame: She was Lauren Conrad’s roommate on the reality TV show “The Hills.”

What she’s doing: Following in the footsteps of Nicole Richie and Kim Kardashian, Patridge, 25, is the latest B-list bombshell to jump from reality TV to an ad campaign for New York’s Bongo Jeans.