By Alessandra Ilari and Jessica Iredale on February 11, 2010
View Slideshow 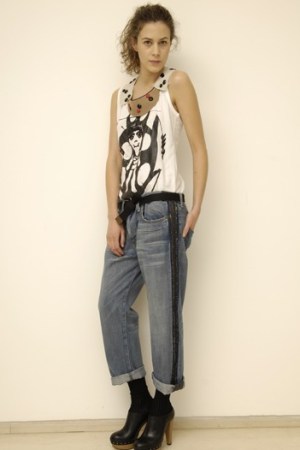 This story first appeared in the February 12, 2010 issue of WWD. Subscribe Today.

That’s certainly the case with the new co-branded denim project from Marni and Los Angeles-based Current Elliott. The eight-piece, one-off collection for fall marks Marni designer Consuelo Castiglioni’s first foray into denim. “The great thing is that I was given free rein, which meant I could treat denim like any other fabric,” Castiglioni says. “The biggest challenge, however, was to design models that reflected the Marni style and bring my vision to the project.”

To that end, the designer struck a grungy-trendy chord, putting her quirky touch on the slouchy, loose-fit “boyfriend” jeans with which Current Elliott shot to fame a couple of years ago. For example, one noteworthy style features a pearl-printed blue cotton shirt sewn to low-crotched and low-waisted jeans to form a one-piece look. “I liked the idea of applying the pearl, which is very emblematic of me, onto the jeans,” says Castiglioni of the print, a Marni signature, which also appears on the cuff of one ink-blue style.

Dyes and washes span from light azure to indigo and from faded to saturated. A few styles will be sold with a black cotton belt that Castiglioni likes knotted as a ribbon. Other details include cloth borders, either press studded or piped in leather. Retail prices for the Marni-Current Elliott jeans range from $250 to $500 and will be carried in Marni stores starting in June.

As for Current Elliott’s part, designers Emily Current and Merritt Elliott were not involved in the project and through a spokesperson, declined a request for comment. Serge Azria, the label’s owner, ceo and creative director, is thrilled for the opportunity to work with Castiglioni on a project he calls “something very unexpected.” “Current Elliott is a California-based, casual jeans brand, and [Marni] is one of the top design houses, with runway shows in Italy — very classic European,” Azria says. “I think the combination of the two is very interesting.”