While NPD found sales within the men’s denim category were down by 2 percent from last year, but that hasn’t stopped brands from entering the market. 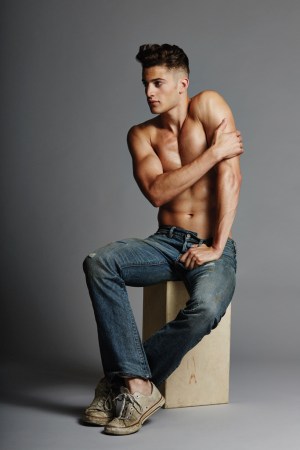 With the rise of the men’s ath-leisure trend — the NPD Group said U.S. sales of activewear were up 6 percent in the first quarter of this year — the common narrative is that denim is what’s taking the hit.

While that’s true to a certain extent — NPD also found sales within the men’s denim category were down by 2 percent from last year in the same time frame — it hasn’t stopped brands from entering the market.

“It’s never really a good time to launch a denim brand, but we just felt like consumers are always looking for something new,” said Casey Egan, who cofounded Deconstructed Indigo Garments, a men’s and women’s denim line, in 2014. “No matter what trend comes through, denim will always have a place. We just want to challenge people to think differently about the way they wear it.”

Egan’s line joins four other men’s denim brands that are hoping to refresh the category by offering interesting washes, special details and new silhouettes that move beyond the skinny jean.

“Of course the market is saturated, but there’s always room for good product,” he said.

That’s why Herman launched his own line of jeans in 2012. The collection was originally designed by denim veteran Simon Miller, but now Brian Kaneda, who also serves as a buyer for Ron Herman boutiques, designs the assortment. Herman told WWD that he initially only had plans to sell it in his stores, but the line has since been picked up by retailers including Mr Porter and Le Bon Marche, which installed a Ron Herman pop-up late last year.

The California-inspired collection, which retails from $270 to $1,200, is made in Los Angeles from Japanese fabrics. Each season the fits remain the same – a tapered, slim and straight leg – but washes and details provide a point of difference.

Classic five-pocket straight-leg styles made from Japanese selvedge fabric are updated with intricate stitched patchwork detailing and a slim style is coated with clear resin to create a 3-D effect.

“We have to inspire customers to shop,” said Herman. “But I’m not trying to make a fashion statement.”

Deconstructed Indigo Garments cofounder Casey Egan, who launched the Melbourne-based brand with actress Ella Rose Foord in 2014, thought there was a hole in the men’s market for heritage denim with innovative tailoring. The designer, who previously worked at Levi’s in the U.S. and Wrangler in Australia, also noticed men making their own changes to denim.

“They were tailoring them and changing them and working on a new leg or cutting the leg in,” said Egan. “We wanted to offer those shapes in premium fabrics.”

The brand, which also produces women’s, manufacturers its jeans in China using Japanese fabrics. Egan plays with proportion and offers silhouettes such as a drop-crotch tapered style and a cropped, slightly flared model. “I personally want to wear looser garments and the cropped jean looks great with a boot,” said Egan.

The line, which retails from $190 to $290, is sold on the brand’s e-commerce site and features 10 sku’s across women’s and men’s, but Egan plans to double that with more tops and knits next season.

“We started the women’s line because we felt like denim was no longer a fashion item, but for men it’s more about the concept of style rather than fashion,” said Grede, who added that men’s product currently makes up 5 percent of the business, a figure he expects to grow to 30 percent over the next couple of years. “We’re not pushing the envelope on classic men’s styles. We are just making small tweaks that modernize the fit.”

The men’s line launched in 2014 with one style and 11 washes. Now the collection, which retails from $200 to $220, features two silhouettes in a variety of washes. Grede said the brand will introduce denim jackets, shirts, cashmere sweaters and T-shirts in later seasons.

This New York-based brand started with women’s and men’s in 2009, but took a short hiatus from the men’s collection before reentering the category last year. R13‘s designer, who prefers to remain anonymous, admitted that he was initially hesitant about moving back into men’s, but said the current mood within the market swayed him.

“I just felt like guys all kind want the same thing and they look like clones of each other,” said the designer. “But men’s wear is shifting very fast and we’ve launched at the right time when guys want something different. We are looking at this as a growth vehicle.”

R13 jeans, which are sold on the brand’s recently launched e-commerce site along with retailers including Barneys New York and TheCorner.com, are designed in New York City and made in Italy from Japanese fabrics. The line, which retails from $350 to $450, includes new denim silhouettes such as the Boy fit, which features a tapered leg with a drop crotch, and the Skate, which has a fuller thigh.

“Men’s wear will slowly shift,” said the designer, “and these pant shapes will become a regular thing.”

Creative directors Jake Sargent and Daniel Corrigan, who were nominated for a CFDA/Vogue Fashion Fund last year, joined Simon Miller’s eponymous label in 2011. Up until now the designers, who are inspired by Japanese textiles and indigo dyeing, have focused on washes, but for spring 2016 they will introduce a new fit for the first time.

“We have a narrow and slim fit, but we are working on something wider,” said Sargent. “It’s a much more fashion-forward silhouette.”

The current collection, which is made in Los Angeles, includes T-shirts, outerwear and shirts along with washed Japanese selvedge denim that’s tinted or distressed. The line is priced from $250 to $350 and is sold at retailers including Steven Alan and Barneys.

Corrigan said that its customers aren’t looking for trendy items, but rather pieces with strong details.

“Men across the board are much more driven by product details and product knowledge,” said Corrigan. “Our best-selling product tends to be our most special product. Whenever we try to strip things down, it doesn’t work.”