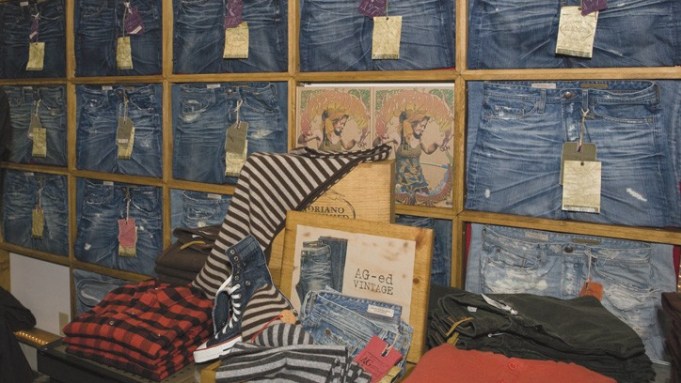 The men’s denim industry is seeing its way through the recession on stable footing, thanks to continued strength in the premium segment, domestic growth from mainstream brands and pricing strategies designed to offer more entry point products.

Men kept up their purchases of denim over the year, but had some clear reactions to the crumbling economic environment. Those purchasing in middle price ranges traded down, spurring domestic growth in brands such as Levi’s, Lee and Wrangler.

At the higher end of the pricing spectrum, men took advantage of heavy discounts at department stores and a move by many premium brands to lower price points on a portion of their assortments. The end result was a squeeze on the men’s middle market and growth at the high and low ends. It also kept the market stable, a rare commodity in the apparel industry in these times.

Marshal Cohen, chief industry analyst at The NPD Group, said men’s denim “joined the ranks of food and shelter where the consumer believes it is a necessity.” Cohen said the male shopper is “saying he lives and works in
denim and has to replace it.”

According to NPD data, men’s denim sales totaled $5.32 billion for the 12 months through March 31, essentially flat compared with sales of $5.34 billion during the same period a year earlier. That stability comes against the backdrop of a 5.3 percent decline in total men’s casual sportswear sales, to $40.81 billion, for the same 12-month period ended in March.

While the premium segment continues to grow, a number of premium denim makers are trimming prices or focusing the bulk of their styles on less expensive styles. Diesel, for example, is emphasizing lower price points this year, with 70 percent of its total denim offering for fall in its entry-to-medium range, according to Steve Birkhold, chief executive officer of Diesel USA.

Similarly, Seven For All Mankind has lowered the sweet spot of its pricing scale to $150 to $189.

“We don’t want to go below $150, but we want to deliver the best value at that price point,” said Topher Gaylord, president of the VF Corp.-owned brand.

Seven For All Mankind has suffered an overall decline in sales in the most recent quarter ended in March, but men’s has been a bright spot. To help revive overall sales, the company is pushing a new sublabel this fall called Premiere 7 that is geared exclusively to the beleaguered specialty store channel. And despite weak market conditions, Seven continues to invest in its retail network, with 17 stores operating in the U.S. now and 10 more to open later this year, not counting overseas units.

“Retail is our single-largest initiative for 2009,” Gaylord said. “We think it’s a great way to connect with our end user and capture market share at a time when there are challenges to our wholesale customers.”

Rock & Republic has flaunted its lowered-price strategy with its aptly named Recession Collection of jeans priced at less than $140, a jumbo discount from the superpremium prices of its main line. As a follow-up, Rock & Republic is debuting another budget-conscious sublabel this fall called Plain Wrap, with men’s jeans priced at $155, and T-shirts, hoodies and Windbreakers from $45 and $85.

Each basic, unadorned item is emblazoned with a generic tag, such as “Jeans” or “Hoodie,” in keeping with the no-frills zeitgeist of the recession. The line will sell in 50 to 75 stores, including Bloomingdale’s and Saks Fifth Avenue.

Priced just below the premium zone, both Silver Jeans and Mavi have found a sweet spot in the $80 to $100 range.

“People will not all of a sudden decide they don’t want to look good,” said Ersin Akarlilar, ceo of Turkey-based Mavi. “What a fashion brand must excel in is to focus on what the brand can do best and offer that at a fair price. In the meantime, customers may switch to buying products that are lower-priced, but higher in perceived value.”

Mavi expects sales to grow 12 percent this year, while Silver Jeans is forecasting 10 to 12 percent gains. Silver has benefited from a strong business in the Midwest, where the recession has been less severe due to a smaller housing bubble.

“It’s a coincidence that was where our sales are focused, but I couldn’t have planned it better myself,” said Michael Silver, president of Canada-based Silver Jeans.

With a focus on more accessible pricing, men’s denim brands have even proven to be a bright spot in the troubled department store channel, with sales advancing 8.5 percent to $794.3 million in the 12 months ended March 31, according to NPD Group data.

Not every premium player is focusing on the lower end of the price scale. At AG Adriano Goldschmied, growth is being driven by its top-tier AG-ed label of hyper-vintage denim, which retails for more than $200.

“From our experience, people are still shopping if you can offer them something new and cool,” said Samuel Ku, design director at the Southgate, Calif.-based AG, which expects to post sales of $65 million in 2009, up from $48 million in 2008.

Men’s is forecast to comprise 25 percent of sales this year at the company, up from 20 percent last year.

Still, while AG has been able to build its business in wholesale accounts by winning square footage from competitors, the effects of the economy have not completely missed the company. It recently had to shutter two of its freestanding stores in Troy, Mich., and San Marcos, Tex., leaving it with 21 branded shops.

AG is adding some outside product to its own stores to diversify its offerings, including luggage from Japan’s Porter and shoes from Generic Man.

“It’s nice to walk into a store and see a mix of stuff,” said Ku. “We’ve also just partnered with a vintage eyewear dealer and we’re going to test sunglasses in our shops this summer.”

Among the biggest denim players, VF Corp. and Levi Strauss & Co., the recession has battered results, with some important caveats. Even as VF reported a 32.3 percent slide in earnings to $100.9 million and a 6.5 percent decline in sales to $1.73 billion for the first quarter of this year, the domestic jeanswear business was a bright spot for the Greensboro, N.C.-based company. Its Wrangler business grew 3 percent in the U.S. and Lee improved
sales 7 percent, while total jeans sales declined 21 percent international markets. VF does not break out revenues by brand.

Similarly, while Levi Strauss reported an overall revenue decline of 13.1 percent in the Americas region to $503.8 million for the quarter ended March 1, most of that was due to its Dockers business. Sales of Levi’s and Levi Strauss Signature product increased in the quarter, after figuring in the business lost from the closings of Mervyns and Goody’s Family Clothing.

Looking at sales by channel, like department stores, factory outlets saw a jump in men’s denim demand, with sales climbing 46.4 percent to $117 million, while mass merchants enjoyed a slight 1.6 percent increase in sales to $1.14 billion.

National chains and specialty retailers saw declines of 3.9 percent and 1.4 percent, respectively. Perhaps surprisingly, sales of men’s denim at offprice
retailers slipped 15.6 percent to $381.8 million, which could be attributed to the aggressive pricing strategies of competing retailers.

“The fashion customer is still looking for something new to buy,” said Kevin Harter, vice president of fashion direction for men’s, home and young world at Bloomingdale’s of the steady denim sales in department stores. “I think that’s why we’ve been having a lot of success with non-indigo styles in black, white and gray.”

The upscale retailer is moving away from merchandising jeans in massive denim walls and is focused on mixing denim into lifestyle assortments, added Harter. An Acne shop was installed earlier this month on the men’s contemporary floor, with denim mixed into the sportswear offerings, as it is with the Raf by Raf Simons presentation.

This fall, Bloomingdale’s will be the exclusive retailer of a denim collection by designer Robert Geller for Levi’s, as part of a men’s design competition staged by GQ earlier this year. The 12-sku capsule range will be sold in the top 12 doors of Bloomingdale’s.

“It’s about adding innovation to the denim floor,” said Harter. “I’ve seen the designs for the collection and we are very excited for the launch.”

Bloomingdale’s also continues to add brands, with Spurr, Billy Reid, APC, Crate, Current/Elliott, Civil Smith and Denim & Thread being added to the men’s mix this fall. For brands facing challenges, such as some of the big Los Angeles-based players, the retailer is editing down assortments from each brand and focusing on styles that are proven winners.

One denim brand that has focused on making inroads into the specialty store channel is Earnest Sewn, which is targeting upscale stores that traditionally have sold tailored clothing.

“This is a sector of the market that had been untapped by us,” said Michael Press, president of the New York-based denim brand. “Many of these men’s clothing stores have been around for generations and are very stable businesses. Men that perhaps were no longer comfortable spending $2,000 on a suit were OK spending $200 on a pair of jeans.”

Earnest Sewn’s targeting of more traditional specialty men’s shops may be a prescient strategy. While denim is usually thought of as a youthful garment, the AARP crowd helped boost sales in the past year with big percentage gains on a relatively small sales base. Denim sales among men aged 65 and older climbed 15.3 percent to $112.3 million, and among men aged 55 to 64 it advanced 13.6 percent to $397.2 million.