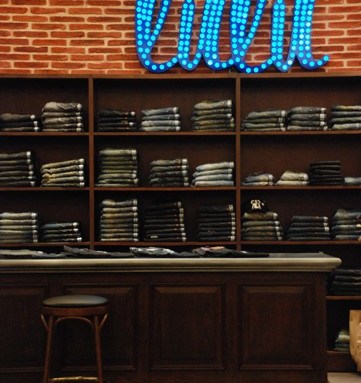 In November, Lulu relocated from its previous home of 10 years at Bal Harbour to the outdoor mall’s second level, doubling in size to 3,200 square feet. Despite reopening at a time when economic conditions were beginning to nosedive — and have yet to improve — Akiba is confident about continuing his success.

“We will never lose our edge, especially at Bal Harbour,” Akiba said. “If we don’t bring the best to our clients, there’s no reason to exist.”

While shopping habits of his largely international customer base have changed, denim remains a performer. According to Akiba, customers who used to buy three or four pairs of jeans are now homing in on a single “It” pair — a special fashion item that justifies the price. Coveted women’s looks are Swarovski buttons and rivets from True Religion, appliqués by Robin’s Jean and Current/Elliott’s slouchy, distressed boyfriend style.

“The concept is you wake up next to your boyfriend, throw on his jeans and go pick up some croissants and have breakfast in bed,” said Akiba, a Moroccan who grew up in France.

He teaches his staff to sell with this type of story in mind and familiarizes them with product through e-mail blasts and brand seminars. More than ever, he believes customer service and knowledge win.

Akiba has taken the idea of delivering service to a new level in Lulu’s latest incarnation, fashioning the store on the model of a French brasserie. A hostess greets shoppers and assigns them a server, who shows items behind a zinc bar complete with authentic trimmings such as Thonet stools, menus and complimentary drinks, from espresso to martinis. As in a typical French restaurant, discounts are given for ordering le complet. The three courses are made up of jeans, a T-shirt and sneakers. Receipts even feature a space for tips.

A blend of nostalgic SoHo and Paris, decor begins with brick walls, polished cement floors and white subway tiles. Akiba located vintage globe chandeliers and sconces, installed a tin ceiling and merchandises with rustic antiques. A neon sign flashes Lulu, his childhood nickname, in lights. But his favorite element is the wall of denim fame.

“While people are trying on clothes, they’re also getting an education in the history of denim,” he said, alluding to hanging photos of Levi Strauss, Elio Fiorucci and Renzo Rosso, among others. “We’re bringing in all the big names in denim for our grand opening this February.”

The store carries around 60 denim lines. Women’s, which accounts for 50 percent of merchandise, retails from $169 for a pair of Seven For All Mankind to more than $200. The store also is stocking tie-dye and tunic-length T-shirts by Great China Wall, Salvage and Silver Dagger for $69 to $189. Akiba combs shows like Bread & Butter in Barcelona for bestsellers such as Diesel Denim Design Gallery, Levi’s Vintage, RRL and Prps, but usually waits to write in showrooms. He isn’t placing smaller orders because of the economy.

“We’re dealing with it by writing reorders based on sales rather than predicting,” he said.

“The center calls us their barometer,” he said. “They know how other retailers are doing by the amount of our shopping bags walking around.”

Akiba plans to use the recession to his advantage by snapping up good real estate deals, particularly in Midtown Manhattan near Bloomingdale’s, where he’d like to open a store. Renovations on Lulu Couture, his upscale, nondenim venture in Manhasset, N.Y., are scheduled for this year, as well.