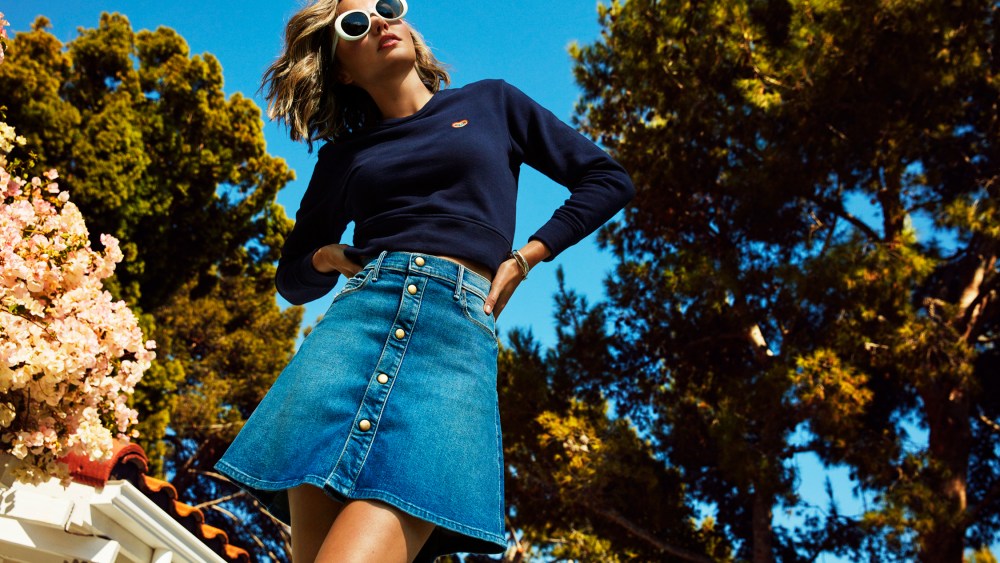 As a model, Miranda Kerr is accustomed to being regarded as sexy, but in her debut as a denim designer, she picks up another descriptor that indicates her growing interest in getting creative: specific.

That’s how both she and the founders of Mother sum up her vision in creating her first-ever jeans collaboration. Whether it was insisting on rises that surpassed 10 inches for a high-waisted fit (“I feel they elongate your legs,” she explained, “it kind of holds everything in as well”), hollowing the sides of a jumpsuit to spice up a utilitarian fabric or pinpointing the exact position of back pockets (“everyone wants a little lifted booty”), Kerr injected her personality, positive affirmations and a breezy vibe into the 12-piece collection. After all, she’s spent years moonlighting as a designer, having produced fine bone china with Royal Albert, tinkered with Swarovski jewelry, whipped up handbags for Samantha Thavasa and revamped the packaging at her skin-care line, Kora Organics.

“I really love being creative and being able to create the elements,” she said.

She seized the moment to work with Mother, which she discovered through a friend soon after the Los Angeles-based company began delivering its first collection in 2011. Since slipping on its high-waisted skinny jeans created by Tim Kaeding and Lela Becker, she’s been spotted at least 10 times in its other styles. “And I like the fact that their brand is about having fun and not taking yourself too seriously,” the 33-year-old Australian said.

“She was one of the first big models and celebrities to wear our stuff,” Kaeding said. “We always had a fondness for her.” Besides, Becker added, “She has an easy comfortable style that is compatible with California style.”

Thus arose the opportunity last May to partner with Kerr, who’s modeled in high-profile campaigns and runway shows for Victoria’s Secret, Seven For All Mankind, Moschino, H&M and other brands. The spring collaboration includes $105 cropped white T-shirts that are core to the model’s personal wardrobe, a $198 flared miniskirt, a $325 faded blue denim shirt embroidered with a pastel butterfly on the back and $225 shredded skinny jeans that have become Kerr’s obsession. “They didn’t want me to be out in public [in the jeans] until we launch it,” she said, adding she promised to Mother’s team: “I swear I’ll wear them inside…I am a bit of a homebody.”

An affiliation with Kerr solidifies Mother’s standing as a favorite fit for models of the moment. In addition to sharing street-style snaps of Kendall Jenner and Toni Garrn sporting its jeans around town, it’s also teamed with Candice Swanepoel and Freja Beha Erichsen on designs that benefited charities. Kerr’s collection with Mother is its sixth collaboration. “Definitely the most specific and organized” was how Becker remembered Kerr’s role, especially after she assembled a 10-page PDF filled with colors, handwritten graphics for T-shirts and an image of a jumpsuit. She also veered away from Mother’s signature frayed hems toward a clean, crisp finish for the pants.

“The inspiration was late Sixties, early Seventies and kind of a little bit of inspiration came from Jane Birkin and also Audrey Hepburn,” Kerr said. One style is actually called The Audrey. Hitting “a little bit above the ankle, it’s more of a classic jean,” she said. “I just made all my favorite jeans that I could ever want. Hopefully other people feel the same.”

Being in touch with her feelings, particularly those that are uplifting, is integral to Kerr’s outlook on life. Hence, her washes bear names such as Absolutely, Positively for a dark indigo and Thanks for Everything for a sun-bleached color. Smile-inducing phrases and symbols like “in joy,” “attitude of gratitude” and hearts also pop up.

“I just believe in the power of words,” she said. “I really like that play on words so we can be in joy not just to enjoy something. We can be in joy, we can be in that state of happiness and appreciation and when our heart feels that happiness. That’s something I kind of wanted to encourage. It’s the same thing with attitude of gratitude. Having that attitude of gratitude for everything, especially the small things that everyday we take for granted.” Plus, practically speaking, she said, “that attitude of gratitude T-shirt is a piece everyone can wear back to jeans and it sends a positive message, not only to the person wearing it but anyone who sees it worn.”

Unlike other celebrity collaborations undertaken by competitors such as AG and DL1961, Mother’s tie-up with Kerr differs in that nearly all the profits are allocated to benefit Australia’s Royal Hospital for Women Foundation, where she serves as an ambassador. Though Mother didn’t provide sales estimates, Kaeding said its momentum for growth continues, tracking a sales increase of 50 percent this year from 2016, when revenue rose more than 40 percent from 2015. Following the introduction of socks and faux fur jackets last year, he’s expanding Mother’s repertoire to sweaters next fall. “It couldn’t be a better time right now to be a denim designer,” he said. “Pants as a whole have exploded in the last year or two. And denim — who doesn’t love denim? It’s a new hot thing again.”

Despite the absence of organic denim at Mother, Kerr came to terms with her penchant for all things natural. “Life is about a balance at the end of the day,” she said. “The great thing about denim is you can keep it for a long time if you have a favorite pair of jeans. I have some jeans and I’ve had them for at least 10 to 15 years. That in a way is being sustainable.”

In regards to launching her own fashion line or designing clothes for her six-year-old son, who, she said, “likes denim to be comfortable,” Kerr’s response is: “never say never.” What she’d like to explore further is interior design.

“I really love different fabrics and putting things together,” she said. “I like doing vision boards and little drawings and what-not. It’s a fun process for me, and looking at different textures, I’m quite a tactile person.”

She’s decorated five houses by her estimate, transforming her uptown Manhattan apartment into a “Parisian chic” abode and turning her Malibu home into a “tranquil” haven. “All of them have a different feel,” she said. “What can I say? I’m obsessed with decorating my house. I’ve always been that way. I don’t have a particular one aesthetic. Whatever house I’m in, I work around that house. I feel that house and where it is.”

Harboring such a passion for interior design, Kerr has even crafted her own pitch to potential partners: “Anyone looking for an interior designer, come to Miranda. She really enjoys it.” In jeans, no less.