Isaac Mizrahi Takes on Denim, With Sunrise in Tow 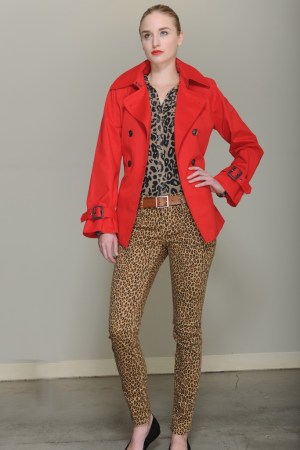 LOS ANGELES — Isaac Mizrahi’s family of licensees has found its way to women’s denim, and with one of the veterans of the fashion jeans business.

Sunrise Brands, the apparel design and manufacturing company headed by Sasson Jeans co-founder Gerard Guez and previously known as Tarrant Apparel Group, is launching a moderately priced line called Isaac Mizrahi Jeans for fall. To stand out in a competitive market still challenged by an unstable economy, the line is banking on the designer’s vibrant colors and bold prints and a personality to match.

“It is a designer look,” Mizrahi said. With reference to one of Aesop’s Fables, he noted his ideal customer is “not a country mouse, she’s a city mouse.”

Sunrise is the latest licensee to link with Mizrahi. Since Xcel Brands Inc. acquired Mizrahi’s licensing business last September for $31.5 million, the New York-based company has embarked on a licensing spree. Robert D’Loren, Xcel’s chairman and chief executive officer, said the company has inked 21 licensing deals in more than 50 categories, including bags, eyewear, shoes, fragrance and clothes for men and infants. Although declining to provide sales projections, he said denim will represent a core license, targeting department stores such as Macy’s, Dillard’s, Belk, Bloomingdale’s and Nordstrom.

“It’ll be a significant business for us and one we’ll watch closely and grow steadily,” D’Loren said. “Given the level of our licensees and their past performance in the marketplace at this level of distribution, we’re certainly positioned well to succeed. As far as Isaac’s direction, we’re trend-right.”

Equating Mizrahi with “timeless looks and modernity,” Stephen Cox, president of Isaac Mizrahi Jeans, said the assortment “can fit a woman who is younger and aspirational and an older woman who wants to look and feel contemporary.”

As fashion tends be cyclical, the bright colors and floral and animal prints that Mizrahi used in the beginning of his 26-year career have come back in style. Cox, who joined Sunrise last June after holding executive positions at Express, Wet Seal and C&C California, injected a funky flavor into the debut collection’s 75 styles with big flowers printed on skinny jeans in cool blue tones, leopard spots on denim pencil skirts and pink and purple polka dots covering sheer blouses. The flashy novelty of motorcycle jackets fashioned from metallic denim is balanced by tan trenchcoats with red piping, dark indigo trousers and matching safari jackets.

Although sportswear makes up 60 percent of the line, D’Loren plans to introduce a separate sportswear license encompassing dresses and women’s suits for spring 2013. The difference between the two licenses is that Isaac Mizrahi Jeans’ sportswear will be more casual and sold in the denim department, he said.

Positioned to compete against Calvin Klein Jeans and DKNY Jeans, the denim styling is intended to be contemporary enough to appeal to a customer in her 20s. Still, the fit also takes into consideration older women, with jeans that flatten the tummy and sizes that run up to 32 for jeans and 12 for tops. Retail prices are also primed for the masses, ranging from $39.50 to $79.50 for tops, $69.50 to $108 for jeans, $98 to $118 for dresses and $98 to $168 for outerwear.

Cox expects Mizrahi’s high visibility to be a plus. In addition to judging “Project Runway All Stars” on TV, he promotes a lower-priced line called Isaacmizrahilive! on QVC and designs costumes for the San Francisco Ballet and Mark Morris Dance Group. He’ll also be providing color commentary from the Oscars’ red carpet on behalf of “Live! With Kelly.”

Mizrahi also tries to keep his line fresh. His favorite pieces include the leopard-print jeans and a color-blocked sweater with a curved yoke, which is an adaptation of popular style he’s done in the past.

With all the new licenses, Mizrahi doesn’t worry that he’s saturating the market.

“I think it’s very underdeveloped at this point,” he said. “I would worry if they were bad partnerships or never done before. It seems the right expansion for my business at the moment.”