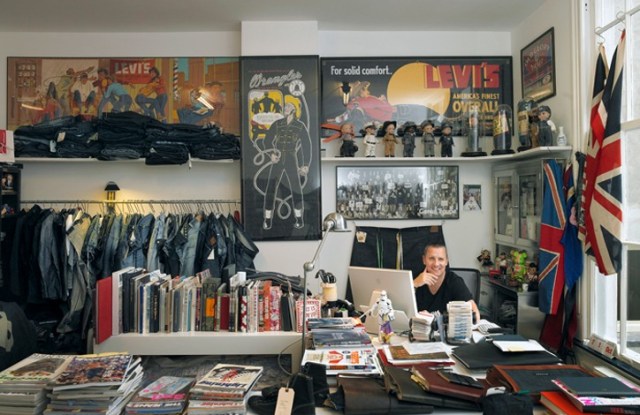 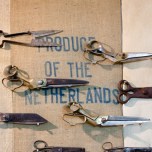 “I couldn’t very well not use my name in my brand,” laughs the Amsterdam-based industry veteran who officially launched the premium Denham collection last year after a long career as founding partner in Dutch denim brand Blue Blood. “I’ve always been interested in denim. The first jeans I ever bought were called Geordie jeans from a store in the northeast [in Newcastle].”

And he hasn’t stopped buying, confessing to an obsession for denim. “You can’t design a jean until you understand where it comes from,” explains Denham, 38, who started collecting denim in earnest about 15 years ago.

Today, his garment library boasts an archive of more than 1,000 pieces of jeans and jeans jackets, as well as vintage military apparel. A pair of antique Japanese fireman’s trousers are the newest addition to his ever-growing collection. The oldest item dates from 1550: a pair of French master tailor scissors. “I have a very large collection of scissors, which is also the logo for the brand,” he notes.

Denham said the garments—which are housed in the design studio—are endlessly inspiring. “I try and replicate the things that I have into new, modern designs,” he says.

Design integrity—and upscale, authentic materials sourced in Italy and Japan—are the key ingredients in a pair of Denham jeans, the designer says. For example, he cites the use of Supima cotton, which gives denim more luster, or selvage fabric made on narrow-width weaving machines in Japan.

“It takes around 50 to 60 hours to make jeans out of this,” says Denham, referring to selvage fabric.

For his spring 2009 collection, Denham included a limited edition piece: a kimono-inspired jacket, replicated from kimonos sourced from Japan and dyed with indigo. These retail for around 1,500 euros, or $2,200. “With each collection, we create a story. The kimonos are a real storyteller,” he explains. “Denim is a creative canvas to work with.

“We believe that this [recessionary] time is a positive time with great opportunity,” he continues. “The Denham company and brand was founded at the start of the recession, but this has proved to be our opportunity. We believe that buyers are working harder searching for new and positive products with a story to tell. No more ‘me-too’ products. Originality is very important in this time.”

In a more quotidian vein is his 50 Cent jeans. “You can wear these every day, and it works out as a good investment,” he says. “[Denim is a] hard-wearing material and you don’t need to wash jeans every day.”

The one possible exception would be white jeans, but Denham has that worked out and has created pure whites for women with a protective Teflon coating.

“All of our ladies’ jeans are made with stretch denim—38 percent elastic recovery,” he adds.

“Today, buyers are looking for good value and good value equals great products. ‘The truth is in the details’ is our motto—customers are more educated every season. This is a very important part of our design ethos.”

That belief is being applied to create jeans that fulfill their function, but are also cutting edge. Signature details include tailored boxed buttonholes, bounded flies, traditional tailored waistband construction, seven-point back pockets and darted hems.

Denham also believes in innovating when it comes to distribution. To wit: Late last year, he launched an e-commerce–equipped Web site, which recounts the brand’s history and features videos as well. Denham also boasts a flagship, which opened in January 2009, in the 9 Streets area in Amsterdam, which also doubles as a showroom and studio. “It’s a concept,” says Denham, whose store has been fitted with TV screens that show how the collections and jeans are made, complete with inspiration storyboards.

The Denham label is sold at wholesale to about 400 doors, mostly in the Netherlands, Belgium, the U.K., Germany, Austria, Switzerland, Italy and Japan. Notable boutiques where the collections are sold are 14OZ in Berlin; Clinic and Hospital in Antwerp, Belgium; Gerard’s Loft in Florence, and Selfridges in London.

According to Denham, the Netherlands is on the rise as a new denim hot spot, noting that several brands, including Levi’s, have set up design studios there of late. “There is a magnetic force,” asserts Denham, describing Amsterdam as a young, buzzing city where people wear jeans all the time.

In his view, Scandinavia has been leading denim trends lately, but the cycle shifts every five years, with California and Japan holding the torch before that.

Chalk it up to denim’s democratic nature. “Denim is for everyone, whether biker, punks, presidents or models,” says Denham. “It’s for every day and doesn’t define one category.”