Philippe Naouri, the founding designer of Antik Denim and Pratt’s Motor Spirit, is hoping the third time is the charm for his latest label, Artisan de Luxe. 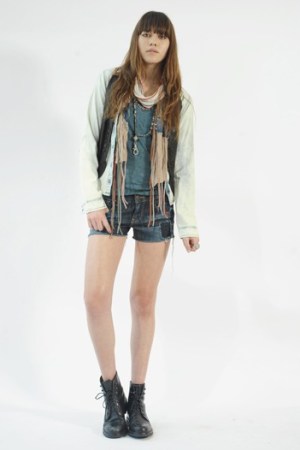 Launching for fall, Artisan de Luxe is Naouri’s interpretation of jeans and sportswear handcrafted for a bohemian lifestyle. T-shirts and waffle-knit thermal tops appear cobbled together through enzyme washes and rope stitching. Hoodies are accented with fang-shaped bone zipper pulls and studs. Washed-leather waistcoats highlight a crisscross back. Jeans leggings are coated in a gold-tinted wax, and black denim cutoff shorts are embroidered with skulls and crossbones.

“It’s like vintage nouveau,” Naouri said during an interview at Artisan de Luxe’s headquarters on Melrose Avenue, a couple of doors away from its flagship that opened in July. “We want to bring the one-of-a-kind pieces to everybody.”

Despite the handcrafted details, Artisan prices were kept under control, thanks to the selection of factories in Los Angeles and Mexico to help complete the finishing. Wholesale prices for bottoms start at $79 for jeans leggings and run up to $109 for styles accentuated with hand-sewn patches. The prices for sportswear are $24 for T-shirts and scarves, $49 for dresses, $49 to $59 for hoodies, $52 for button-up shirts and $100 to $1,000 for sterling silver necklaces and cocktail rings dotted with hand-cut diamonds.

The debut collection consists of 80 pieces, including 15 men’s denim styles in skinny and straight legs and 14 women’s jeans in skinny, boot-cut, flare, boyfriend and legging styles. Half of the wholesale business will come from denim. Leather pants, wholesaling for $275, are set to make their debut this holiday, and washed canvas sneakers, priced at $25, are in the works for next spring.

“We still keep the prices down because of the economy,” Naouri said.

Times have changed dramatically since 2004, when Naouri helped kick off the craze for elaborately embellished back pockets on $300 jeans at Antik Denim with Alexandre Caugant. Two years ago, he predicted the moto-inspired trend when he designed motorcycle-style jeans at Pratt’s Motor Spirit, his first solo venture after Antik. After a business relationship soured and forced him to close Pratt’s, Naouri teamed with Jay Furrow, the former chief executive officer of Joe’s Jeans, to launch Artisan de Luxe.

Retailers that have already ordered Artisan de Luxe include Atrium in New York, Lulu in Miami, Fred Segal Fun in Santa Monica, Calif., and Kitson and Politix in Los Angeles. Furrow said he has lined up foreign distribution in countries such as Japan, Germany, Italy, Russia and Canada.