A new class of upscale jeanswear specialists will be making their first appearance at next week’s show in New York. 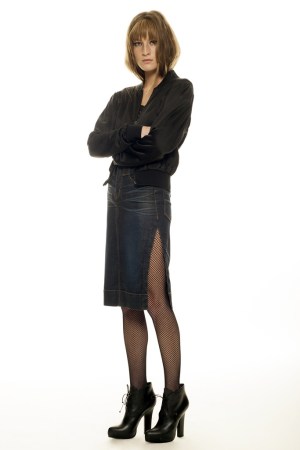 A new class of upscale jeanswear specialists will be making their first appearance at next week’s Fashion Coterie show in New York, and they’re likely to further blur the already thinning line between premium jeans and contemporary collections.

This story first appeared in the February 20, 2013 issue of WWD. Subscribe Today.

As many of the original group of premium denim brands have sought to diversify their lines — and in some cases, like that of J Brand, add contemporary collections to already developed denim businesses — a growing number of newer resources have entered the market, many preferring to endorse the collections path. Even those with a premium denim base have a collections mentality — and an eye on the growing acreage to be found in contemporary stores and the contemporary areas of department stores.

Many of the executives behind these lines have denim pedigrees and strong ideas about where the market is headed.

RELATED STORY: Coterie Preview, a Girl for All Seasons >>

Before starting the Joie collection, Joie Rucker had established herself in the denim world during stints at Levi Strauss & Co. and Guess Inc. Caroline Calvin, with whom Rucker cofounded and now codesigns Calvin Rucker Inc., had worked for Levi’s in the U.S. and Europe. Their new enterprise, begun with a soft launch late last year, enters its second season with its first appearance at Coterie.

“We’re ready to go,” Rucker said. “Right now, we have about 30 doors and we’re more interested in great relationships with the right stores than we are in looking for big volume.”

Coterie, she noted, should help them attract accounts they wouldn’t see in their showrooms in their hometown of Los Angeles or in New York.

“Our priority is mainly international,” Rucker said. “We’re not showing outside the country and this is the right show to help us get exposure to people who may not even know we’re around. Our philosophy is to grow organically, but we don’t want to hide our existence either.”

Rucker and her partner are currently doing about a quarter of their business in jeans but are being selective about their embrace of what, for them, is their heritage category. For instance, their “Love Me” jean is an “exaggerated boyfriend fit.”

“We’re really focused on making this a collection, but even in our jeans, we’re working hard to avoid the duplication you’ve seen in the market when people come up against a tough economy and fall back on what’s safe,” Rucker said. “Every brand I’ve seen have success in the long term has had a very distinct look, and we know we have to build a vision and an aesthetic that are unique to us.”

The duo’s goal, she said, is to produce sportswear — various bottoms, dresses and a variety of tops — “that’s not disposable. We’re targeting the customer who goes out and curates her wardrobe. We’re not among those who are focusing on how cheaply you can make it or how quickly you can churn it out.”

Diesel and William Rast veteran Johan Lindeberg began his BLK DNM collection two years ago as a denim-based retail venture with the backing of Kellwood Co. But he received new backing from John and Jamey Hargreaves last year, and, while sticking to his merchandising focus on denim and related products, such as leather jackets, he has begun to shop the collection to wholesale accounts, paving the way for his first appearance at Coterie.

“We didn’t get into wholesale until spring 2012,” Lindeberg said, “and we’re now in more than 300 stores in about 30 countries. This is our first serious push into wholesale and I’m very pleased with our progress.”

The line is showcased in stores in New York and Stockholm, as well as a showroom in Paris. Outside of the Copenhagen International Fashion Fair, Coterie is the first trade show in which BLK DNM will participate.

“No matter how much we do with leather jackets and pants and tops, denim is our core — it’s in our brand — and, like the base of retail stores like Webster and Ron Herman, it’s the base that everything else stems from,” Lindeberg said. “In jeans, we have four fits for women and three for men, as well as denim jackets and shirts, and we function as a stand-alone denim collection. We wear it and we live it.”

Seven For All Mankind cofounder Peter Koral and company veteran Rick Crane were coaxed back into the denim business, and Peter’s son David also drawn into it, by Koral Los Angeles, a new venture that seeks to avoid the sameness that the team saw creeping into much of the denim world. After launching with women’s jeans last fall, the company is now offering men’s jeans with the same “lived-in length” idea that propelled its women’s assortment. The concept identifies core denim products by the number of months of wear the fabric, through various processes, appears to have, beginning with zero and ranging up to 36.

Having presented at trade shows in Paris and Berlin, the company has opened up more than 150 accounts, and the product line has expanded to include chambray and denim shirts, sateen, resin-coated jackets, and, beginning with spring shipments, men’s.

“We’ve been to Europe now, but we look at Coterie and the Las Vegas shows as our coming-out party,” David Koral said. “We feel very good about the distribution we’re getting in the U.S. and Europe, but this will give us a chance to create a true Koral environment and address some of the potential business we haven’t been able to get to through our L.A. and New York showrooms.”

As for so many U.S. brands, Europe is a high priority and placement in stores, including Selfridges and Harrods, a point of pride for the new business.

“We’re really trying to solidify ourselves as a denim brand and then take it further,” Koral said. “This is a very competitive market with a lot of brands vying for market share. For us, the key is to keep the merchandise what you might call ‘designer-esque’ and maintain an air of exclusivity.”

Jimmy Taverniti, known for efforts including Taverniti So Jeans, is heading back to the denim market, and straight to Coterie, with a new jeans effort known as D-ID, standing for Denim Identity.

“We’re using subtle design touches, like quilt stitching, to address the woman who’s tired of wearing prints or loud, splashy denim treatments,” said Anthony Frym, chief executive officer. “These items had some sales, but they were pretty trendy and even women who bought them had a bit of a love-hate relationship with them. We’re after something a bit more timeless and sophisticated and not overly trendy.”

He explained that in moving away from some of the more dated looks offered in the past few years, many lines have gotten “basic or raw, and we don’t think that’s going to excite the consumer. Contemporary specialty stores want something they haven’t seen.”

So D-ID’s basics, which incorporate subtle stitches, as well as overdyes on denim and even leather, will open at about $148 retail, and move up to about $168 for more upscale pieces.

Frym said U.S. distribution is the priority for the line as it opens.

“Validity comes from making it in America,” he said. “The Europeans and the Japanese are looking for products that have proven themselves here.”

Also new to Coterie is Strom, owned by Erika Stromqvist, a former model who serves as creative director, and her husband Matthew Fisher, ceo.

“We’ve got a lot of plans, but to start we’re focusing on the women’s premium denim market,” Fisher said. “Not only is it Erika’s passion, but it’s a product category that has special requirements in terms of production. Getting a quality denim product shipped is a special challenge.”

Like others interviewed, Stromqvist considers prints a risky proposition in the denim world, and prefers to deliver novelty with twists in solid fabrics, such as a reflective silver cloth, and silhouettes, as seen in her use of dressy welt rear pockets and a legwarmer-style bottom on her Poppy jeans.

“This isn’t something we’re going to blast to the big department stores,” Fisher said. “This is a building process that fans out from better specialty stores and high-end boutiques. And the product line’s the same way — we’re starting with denim and moving out from there.”

New categories are already under development.

“We’re keeping them to ourselves for now, although we might have a few ideas in the back when we’re at the show,” Fisher added.