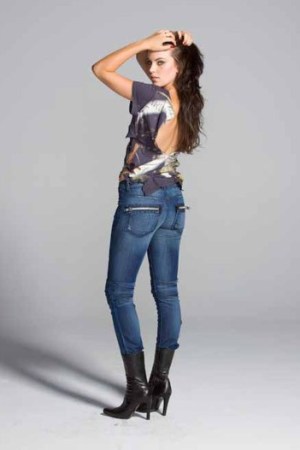 Those launching lines now, amid the first tentative steps out of the recession, might be catching things on the way up. Although expectations are tempered by a heavier dose of realism as a result of the global downturn, the recent round of trade shows in Las Vegas have left new brands feeling there’s still much opportunity in the market.

Frank Mechaly found success in the premium market with the 575 Denim label. However, three years in a legal battle with Levi Strauss & Co. over the label’s name eventually forced him to start a new brand. By the time he began presenting his latest label, Rockstar Sushi, in December, global economic conditions were disastrous.

“I felt at the time that because of the economy the consumer would change their habits,” Mechaly said. “They won’t completely stop buying product, but my thought was that they would drastically change their buying habits.”

Mechaly believed there was little difference in the premium lines on the market. Brands tended to use the same fabrics and same laundry facilities, resulting in a sea of five-pocket premium jeans retailing for $200 with the main difference in the labels, embroidery, stitching or other minor detail. Rather than target a lower price range, Mechaly opted to go to the higher end with Rockstar Sushi and offer a fashion denim retailing for $220.

The strategy seems to have worked, although Mechaly admits that volume has not been eye popping. The line is being carried by retailers such as Saks Fifth Avenue, Atrium, DNA2050 and Kitson.

“What we used to have before was, well, we were all living in la la land,” he said. “I think we went back to reality. I feel every day that things are getting so much better. I’m not saying that the crisis is over, but I think at least the worst is behind.”

Conditions also forced Mechaly to become more flexible and work closer with his clients. More time is spent on customer service and finding alternative payment structures to enable him to continue working with certain retailers.

There’s little doubt that lower prices are enticing retail buyers. Daniella Siri started Recession Denim in April and has gotten the line into more than 60 stores, including Bloomingdale’s, with retail prices of $80 to $100. She’s had little trouble getting meetings with store buyers and believes the price for the level of quality she’s providing is hitting the right chord.

“I sensed that I was providing [buyers] with something that was very necessary,” Siri said. “Everybody said, ‘Wow, I like this. This is what we need right now.’ Some people might complain that times are tough. For me, coming in at this time, I don’t know anything else, but I definitely think there’s opportunity out there.”

The Vintage Revolution line is the product of José Juan Marcos González, whose Mexican factory produces denim for brands such as Gap, Polo Ralph Lauren and Lucky Brand, and designer Christine Rucci. The line’s retail prices range from $77 to $125. González believes the pricing strategy, combined with his background in washing and production, make it an ideal time to enter the market.

“People will always be using jeans,” González said. “There’s a market and because of our strategy and the facility, we have the capability to do everything.”

The line will get a full launch for spring and is being targeted at Nordstrom, The Buckle, Bloomingdale’s and some specialty stores. González is aiming for sales of $5 million to $10 million in the first year.

“The reality is it’s a tough market, but when people hear the price, that really perked up the ears,” Rucci said of showing the line at Project Las Vegas. “There are opportunities in a slow economy. There’s always some hesitance, but there’s others that are interested to take a chance with new brands. I got a very positive sense.”

Denim Junkie is the latest line to be produced by Red & Blue LLC, which is run by Emmanuel Sfez and his father, Joseph. The Culver City, Calif.-based company also manufactures Z-Brand, Blue Blood, A&G Rock Collection and the men’s lines for Ed Hardy and Christian Audigier. Sfez serves as creative director for all the brands.

“We’ve listened to what people wanted,” Sfez said. “They want cheaper price, but still quality. I think we’ve managed to do it here.”

Wholesale prices run from $16.50 to $54 for the women’s category and from $20.75 to $58 for the men’s grouping. Denim Junkie’s inaugural collection will arrive at specialty stores, including Pittsburgh Jeans Co. and New York’s Trash and Vaudeville, in time for the holiday shopping season. For spring, Denim Junkie lined up retailers such as Bloomingdale’s, Planet Funk and Urban Outfitters. Sfez projected the brand could generate $10 million in sales in its first year, and he, too, is seeing signs of optimism among buyers.

“[Buyers] just seemed to be very confident in buying the product and in their overall outlook,” he said. “I think things are picking up, I think they really are.”