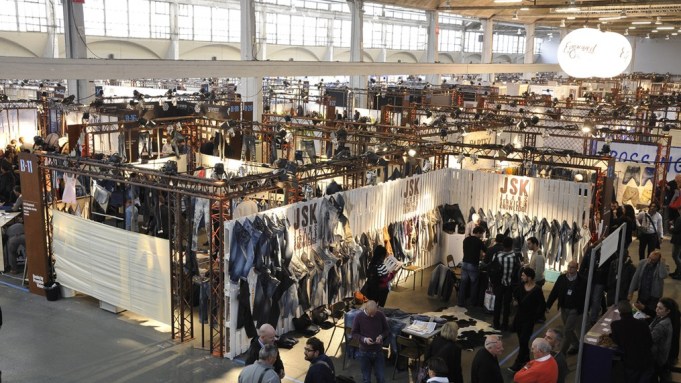 PARIS — News of Denim by Première Vision’s imminent move to Barcelona as of spring didn’t overshadow innovations’ starring role at the fair, which was held here Nov. 27 and 28.

“Stretch technology and the increased use of performance fibers in new innovative shades and constructions was a key trend,” said Neil Bell, global material fabric and fiber innovation director at Levi Strauss & Co.

The show demonstrated how denim is entering an era of collaboration as a route to newness. For example, fiber producers Invista and Lenzing held a joint press conference to present new cellulosic denim fabrics with improved shape retention by combining Invista’s Lycra DualFX fabric technology with Lenzing’s Tencel fiber.

Denim is merging with other disciplines like sports. Turkish weaver ISKO’s A New Generation of Future Face fabrics can be used for yoga or running pants. There is also Orta Anadolu’s Coldblack technology with thermo-regulation properties, keeping users from feeling too warm during summer while also guaranteeing UV protection.

Among other key trends for spring 2015 were graphic patchworks, ghostly patterns, red-cast denim with a purple tint, variations on indigo, stretch for men that still looks masculine and looser fits, like the “slouchy boyfriend,” as phrased by denim guru Adriano Goldschmied.

Still, the show’s move, and the changing face of denim exhibitions in Europe, was a major topic of conversation.

“Denim is an industry that keeps moving,” Denim by Première Vision director Chantal Malingrey-Perrin said. “We had been looking for a space that would give a new breath to the fair,” she said of next year’s move to Spain. The next edition of Denim by Première Vision will be held at the Montjuïc exhibition center in Barcelona on May 21 and 22, not long after the first European edition of Kingpins, expected to gather around 20 premium denim mills and suppliers, to be held in Amsterdam on May 7 and 8.

Exhibitors and visitors largely voiced approval of the relocation to Barcelona, although some attendees pointed out that Northern Europe and particularly Holland would be better suited for a denim showcase.

“We are working at getting a softer hand to the fabrics. Softer fabrics are very important for women’s denim,” said Goldschmied, who is executive vice president of product development for Citizens of Humanity and founder and creative director of the GoldSign label. “We are looking for blends, mostly cupro, that have a very silky feel. We are also using Modal, ProModal, Tencel, rayon, etc.”

Goldschmied also cited a trend towards coated denim, including “variations such as lasering on the top of coating or applying printed foils.”

Paris-based designer Alexandre Mattiussi of the French men’s wear label Ami visited the show for the first time. “We are doing more and more denim. It is a successful part of the collection, especially the pants and jackets,” he said.

Mattiussi said he was looking for raw, “almost cardboard” cloth, “the Japanese kind of denim,” which he likened to a “canvas that acquires a patina over time.”

With its Future Face initiative, ISKO has aimed to widen its customer base to “not just denim brands, but sports brands or fashion labels doing sportswear,” according to ISKO senior marketing executive Banu Yenici.

The mill also presented its concept for a partnership with fashion schools, dubbed “I-Skool,” where students will have the opportunity to work with the newest denim technologies and visit laundries.

A jury of denim and other fashion experts is to select the most talented students. “There is a lack of knowledge [among students], not theoretical but technical,” said Marco Lucietti, ISKO global marketing director. “We want to narrow the gap between the industry and schools.”

European design and fashion schools involved are Istituto Marangoni from Italy, ESMOD Münich from Germany, Istanbul Moda Academy from Turkey, and the London College of Fashion and Chelsea College from the U.K. “We aim for it to be a global project, meaning to have one school from the U.S., one from Japan, one from China” joining the program, he said.

The show gathered 87 exhibitors including other weavers like Bossa and Tavex.

The visitor count increased 20 percent versus November 2012 to 3,202, with attendance rising 48 percent from Turkey, 24 percent from Portugal and, despite the Thanksgiving holiday, 8 percent from the U.S., according to show organizers. U.S. buyers included representatives from Ralph Lauren, Seven For All Mankind and J Brand.