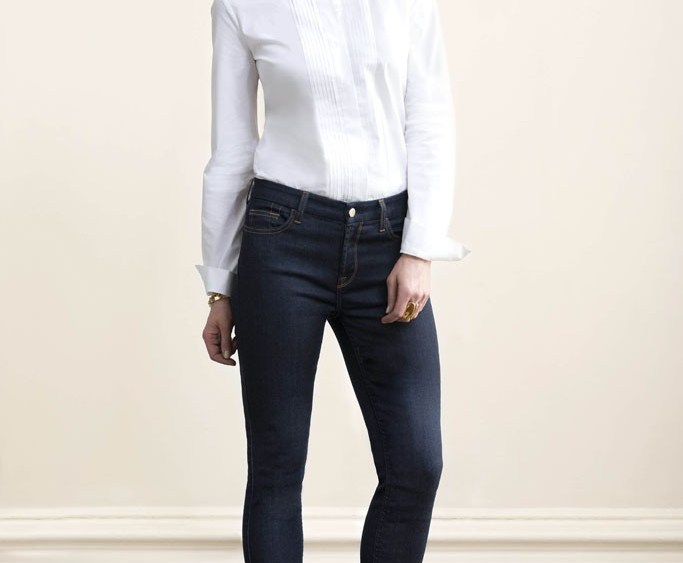 VERNON, Calif. — While numerous marketers are chasing Millennials, Seven For All Mankind is launching its first subbrand to appeal to older female shoppers who could be key to strengthening its weak sales in the U.S.

Jen7 is the first brand extension in Seven For All Mankind’s 14-year history. It’s also an appeal to women who might have bought jeans from Seven For All Mankind’s early collections but stopped due to changes in their lifestyle. Evolving from party hoppers into working moms, Jen7’s potential consumers are growing out of the contemporary market’s fits and trends but aren’t quite ready for the missy department. That’s a niche that has been well served by resources like NYDJ but hardly a focus in the more contemporary premium jeans market.

“It’s everybody’s natural reaction to think it’s something similar [to NYDJ]. There’s not another reference out there,” said Peggi Jewell, Seven For All Mankind’s vice president of product. Jewell added that Jen7 differs from NYDJ in its fits and higher pricing. “The quality of material is different,” she said.

This customer “still wants to be sophisticated and stylish,” said Seven For All Mankind president Barry Miguel, surrounded by Jen7’s inaugural fall lineup at the VF Corp.-owned brand’s office here. “We see this as a large opportunity for the brand and the opportunity to speak to a woman who has been an existing customer and [also] a new customer.”

The sole premium denim brand in VF’s contemporary division, Seven For All Mankind is attempting to grow sales amid challenges like the popular ath-leisure trend. VF said sales for its contemporary brands fell approximately 5 percent to $98.2 million in the first quarter from $103.7 million a year ago. VF noted that Seven For All Mankind revenue decreased by a high-single-digit rate in the U.S. in the same period.

Emphasizing a clean, polished look, Jen7 doesn’t offer a single yoga or workout pant among its 30 styles for fall. For its three core fits — skinny, slim-straight and boot — the line uses only stretchy fabric, whether it’s denim, twill or ponte sourced from the same Italian and Japanese mills that the main line uses. The palette is steeped in inky blue, black and neutral tones with pops of red, royal blue and a black-and-white bandana print. Retail prices run from $175 for blue jeans in a basic rinse with contrast yellow stitching to $215 for snake-print cotton twill jeans that were coated and etched with a laser.

The key differences between Jen7 and Seven For All Mankind’s main line are seen in the rise, contour waistband and fit around the hips and thighs. Resting just below the belly button, the waistband is curved to ensure it doesn’t ride low. Based on a five-pocket jean, each style is cut to allow for at least 2 inches of stretch around the hips and thighs. Jen7 also abandons the usual waist measurement for sizing, offering instead size 0, which is equivalent to a 24-inch waist, and running up to size 14, which corresponds to 32 inches. The inseam also measures an inch shorter to accommodate a busier life that requires fewer pairs of party-ready stilettos.

“She’s throwing a dinner party at home, not having cocktails at a club,” said Andy Griffiths, vice president of marketing.

Moreover, Griffiths said Jen7 is taking a different approach to marketing. The main line will feature Miranda Kerr in fall ads for magazines such as Vogue, Elle and Interview, while the Jen7 promotions will highlight Nineties-era model Chandra North to be published in different magazines with a broader readership, he said.

Aiming to be merchandised alongside labels like Tory Burch and Eileen Fisher separate from other premium denim brands, Seven For All Mankind is wholesaling Jen7 to 38 doors belonging to Saks Fifth Avenue, Nordstrom, Neiman Marcus and Bloomingdale’s in the U.S., including flagships in New York, Beverly Hills, Dallas, San Francisco, Las Vegas and Bellevue, Wash. The e-commerce sites for Saks, Neiman’s and Nordstrom also will carry the line. Next spring should see the retail map widen to specialty stores. Miguel declined to disclose sales forecasts for Jen7.

“We want to do this [launch] right,” said Jewell. “We believe in this long term.”