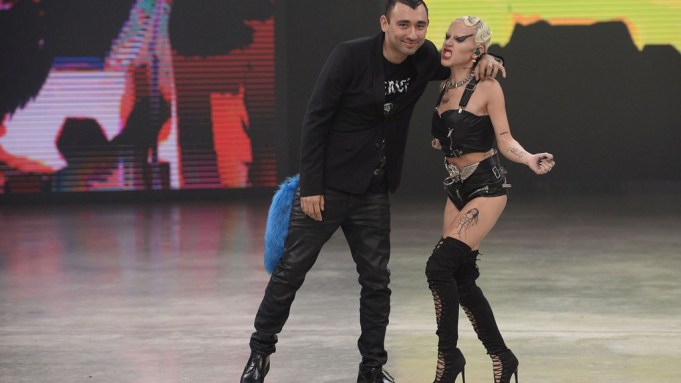 VENICE — “Venice is like eating an entire box of chocolate liqueurs in one go,” Truman Capote once said. And so it was with the Diesel show, held at the Venetian Arsenal on Thursday night.

Fashion, music, video art — they all merged into a spectacular, over-the-top event celebrating the first collection designed by Diesel artistic director Nicola Formichetti, who joined the Italian company a year ago.

“This is not just a runway show; this is what we want to be in the next 10 years,” said Diesel founder Renzo Rosso. “We want to be the contemporary alternative to the world of luxury — no more frivolous things. We want to deliver a very precise image.”

“This is a foundational collection,” said Formichetti, who organized the lineup into three different blocks, focused on Diesel’s signature elements: leather, denim and military references.

The show opened with sexy chicks in leather zipped dresses embellished with metallic pieces in the shape of Venice’s signature lion and rock ’n’ roll guys in biker jackets and skinny pants. The extensive denim section ranged from traditional classic jean outfits to Nineties-inspired slouchy trousers and a number of laser-cut pieces, which Formichetti described as “denim couture.” The military group included parkas with shearling inserts and power coats paired with colorful sweaters in geometric patterns.

“There is everything, from classic to sexy, but it’s all so wearable,” said Formichetti, who tapped American rapper Brooke Candy to perform live before the surprise show finale: The models took the runway wearing balaclavas decorated with colorful Mohawks and Mickey Mouse ears.

“It’s so cool. I love Renzo, I love everything he does,” said Courtney Love, who was among the celebrities attending the event. “I’m wearing Diesel tonight even if it’s probably more for my daughter than for me,” she said with a laugh. The rock star, who will play in London in May and who is finishing a book, revealed she is going to launch her own fashion line. “I’d love Renzo to produce it,” she said.

Asked about a potential collaboration with Love, Rosso replied, “She has never talked to me about this, but never say never.”

Other guests included Dree Hemingway, Italian actresses Asia Argento and Cristiana Capotondi, musicians Elisa and Marracash, and American actor Colton Haynes, who portrays superhero Roy Harper in the TV series “Arrow.” “It’s such a work of art — the music, the flames at the entrance, the location itself,” said Haynes, in Venice for the first time. “I’m going to take three months of vacation to explore the world — in particular, I want to go all over Europe and I want to visit Shanghai.”

Dsquared2’s Dean and Dan Caten, Viktor & Rolf’s Viktor Horsting and Rolf Snoeren, along with Marni’s Consuelo Castiglioni, the creative directors of the brands under Diesel’s parent company OTB, also joined Rosso in Venice for the show.

“When Renzo texted to invite me to the event, he wrote: ‘Consuelo come, it’s the most important event of my life,’” Castiglioni revealed.