Nobody Celebrates 10 Years With ‘Heritage’ Line

Premium label Nobody is marking its 10th anniversary with a collection that celebrates the brand’s roots in the denim industry and its Australian bloodline. 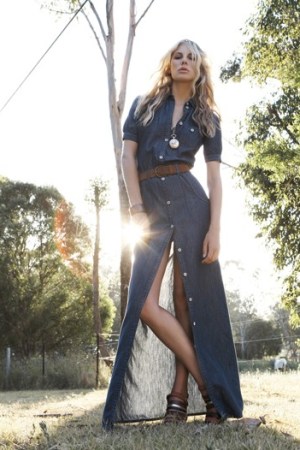 Premium label Nobody is marking its 10th anniversary with a collection that celebrates the brand’s roots in the denim industry and its Australian bloodline.

Nobody will introduce the Australian Heritage Collection this fall, a denim-centric line that takes its inspiration from the shapes and styles of denim from 100 years ago. Wesley Hartwell, Nobody’s creative director, described the approach as projecting the core Nobody line back in history while updating design elements with modern touches. The goal was to create a line with a “rural glamour” and a strong feeling of being connected to the land.

“It’s much more of a workwear feeling for women and men,” Hartwell said. “It’s a worn-in feeling.”

Achieving that look and feeling meant devoting more time to washing and processing the Japanese fabric used in the line, and incorporating a significant amount of hand-distressing and detailing.

The women’s collection includes dresses, jumpers, a long short that has been distressed and repaired, denim shirts and four jeans styles. A straight-leg, midrise jeans style has been dubbed the Jillaroo, which represents the line’s more tailored take on a boyfriend style. The Jackaroo is a more masculine style featuring a button fly and a more beaten and worn look. The Rebel Leggin is a skinny style that utilizes a lot of stretch fiber.

“It’s denim, but it’s designed to be super fitted — right down to the ankle,” Hartwell said.

The men’s side has only two styles that were determined by how men working in rural areas may have approached their decision making when it came to bottoms.

“A very tight jean, because if you’re working with machinery, it needs to be more fitted,” Hartwell said. “Then there’s a more dungaree feeling.”

Nobody is also using the Australian Heritage Collection to showcase the company’s extensive background working with denim. The label was founded in 1999 by brothers John and Nick Condilis, whose father set up a laundry in Melbourne some 30 years ago. The brothers got involved in the business, which has expanded to manufacturing, before adding their own brand to the mix. Hartwell joined the company in 2001.

“As a brand that’s 10 years old, with a history of denim manufacture, we see ourselves as denim experts with high quality and attention to detail,” Hartwell said. “That hasn’t changed. It’s where we push.”

Conveying that message to the U.S. market has been a slow process. Hartwell said new brands coming to the U.S. often become known first for their fashion pieces.

“This year and last year were the years that we started to be known [in the U.S.] for really what we are,” he said. “I think that’s the difference. We’re proud of our fashion pieces, but it’s quite a different perspective to be known as a denim brand that has fashion, rather than a fashion label that has a denim component.”

Hartwell has played a key role in changing that perception, moving to the U.S. and spending the last year traveling the country to meet with customers. Early reaction to the Heritage Collection has been positive.

“I’m expecting to continue it, because it had such a strong reaction,” he said.

Retail prices for the line range from $250 for the Rebel Leggin to $400 for styles requiring handwork and repairs.