The French label has set up a workshop at Le Bon Marché and is slated to open a store exclusively dedicated to men. 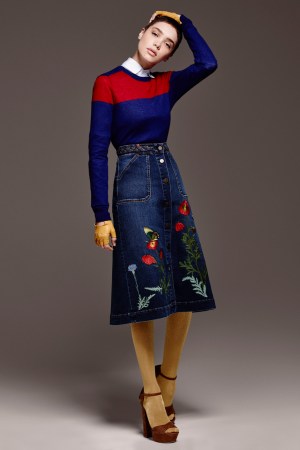 PARIS — It’s a good time for made-to-measure, and that includes denim. Case in point: Notify, the French denim label, which has made bespoke its mantra since it was established in 2003.

“When I started as a tailor more than 30 years ago, we went months without eating. The industrialization of the apparel industry was in full swing,” said Notify founder Maurice Ohayon. But times have changed, he acknowledged, sensing a back-to-the-roots movement that echoes the industry’s trend toward customization, which has also swept over denim.

Notify last month set up a mini-denim factory at the heart of Le Bon Marché’s newly revamped women’s floor, which serves the bespoke clients of its own brand but also caters to customers of other labels wishing to customize a pair of pants, a shirt or jacket they fetched from elsewhere.

Ohayon says he invested specifically in machinery to be able to work any type of denim, which depending on the brand would have different properties such as depth or feel. “We work with 200 different colors of yarn, which include our own but also those of our competition,” he explained, while also pointing to a tool for making eyelets, laying Swarovski crystals, laser printing and embroideries, which here can be done with up to 15 different colors at a time.

At Notify itself, customers are not only measured as they would be at a proper tailor’s, they are also involved in the design process, choosing anything from the washes to the plethora of patches, studs, stones and prints the label is able to integrate into the design.

While the customization is included in an order of a bespoke pair of jeans, which depending on the fabric and washing runs between 450 euros and 550 euros, or $505 and $617 at current exchange, Ohayon said he has noted that clients more and more often choose to buy a lower-priced item at a brand like Gap or Zara “and then come to us and go crazy for 400 [euros] or 500 euros worth of accessories, which start at 3.50 euros for a patch.”

“It’s going so well, in June we will open a new store, including a made-to-measure atelier, dedicated exclusively to men,” he revealed.

The new unit is to be located at Rue des Saints Pères, a stone’s throw from Le Bon Marché department store.

The brand, which has its own factory in Italy, has two more stand-alone venues on Rue Saint-Hyacinthe in Paris and in Milan, in addition to 450 wholesale points around the world. A boutique in Geneva is to follow soon.

“Our strategy is no longer to grow through wholesale, but to set up retail posts that include a made-to-measure workshop,” Ohayon explained, adding: “I have always regretted leaving tailoring this quickly. I was born into a family of tailors. My mother was a tailor, her mother was a tailor, my aunts worked in couture, someone was always sewing something around the house,” he said, and although the Eighties were not an easy time for bespoke, they led him to denim.

“We stumbled across this guy who had brought new fabrics from the States and he agreed to give us a credit. That’s how it all started,” he smiled.

Ohayon previously created denim labels Fetish, Western Passion and Seven7, before setting up Notify, which counts the Bamboo, a skinny jean for women, and the straight-leg Nobilis for men, among its off-the-rack bestsellers.

The label is expected to generate 12 million euros, or $13.5 million, in sales this year.