Nudie Jeans in Push for Transparency

Company will list all suppliers in a new production guide, with total traceability scheduled for 2015. 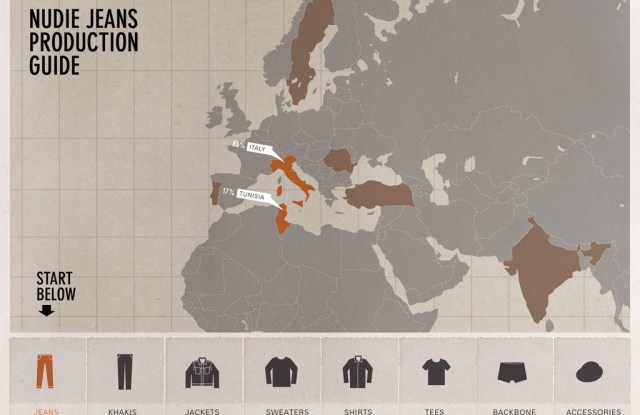 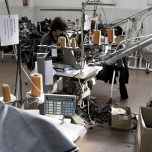 Nudie Jeans is preparing to bare all, but it’s the company’s supply chain rather than its models that are getting ready to be undressed.

The company on July 1 will post on its Web site at nudiejeans.com a complete guide to its suppliers, indexed by both product category and country, as part of its effort to be completely transparent in its production and distribution within two years. The initiative follows the company’s move in 2012, after a six-year effort, to convert all its jeans and other denim products to organic cotton.

The goal, according to Palle Stenberg, cofounder and chief executive officer of the Göteborg, Sweden-based firm, is to allow a Nudie customer to trace the path of a product from raw materials through its delivery at retail, and be able to verify that products have been produced in a manner that respects the environment and the individuals on the production line.

“The philosophy here is the same as when we started,” he told WWD. “We take care of the people who work with us in any way we can. It’s nice to go to bed at night, put your head on the pillow and feel good about what you’ve done in the course of a day.”

Within the two-year time frame, following the selection and implementation of an Enterprise Resource Planning system, customers will be able to use a 20-digit number imprinted on the labels of their Nudie garments to access their path from fiber to store. In addition to giving consumers visibility, it will help Nudie trace counterfeit or diverted goods.

The first step of the journey toward total traceability was a bit easier for Nudie because of the relatively narrow breadth of its supply chain. About 80 percent of its production comes from 20 suppliers spread across just seven countries — Italy, Portugal, Sweden, Tunisia, Turkey, India and Romania.

Clicking on the jeans icon in the production guide, for instance, tells the viewer that 83 percent of its jeans production is in Italy, split between two suppliers, and the remainder with a single producer in Tunisia. Clicking on the supplier’s name takes a visitor to a page devoted to that company, giving its address, history as a Nudie supplier, services and products and results of recent audits undertaken by Nudie, both independently and through its association with the Fair Wear Foundation, of which it is a member. Information on a manufacturer’s subcontractors is available, too.

Information about individual audits, both social and environmental, and FWF’s semiannual performance checks will be added as they become available, and, even before the scheduled move to 100 percent traceability comes in 2015, consumers can contact Lang to follow up.

Nudie has no production in Bangladesh — its only production in Asia is with a single supplier in India — but the firm’s management understands that the Tazreen and Rana Plaza tragedies have given the push for transparency added momentum.

“We need to feel as secure and safe about our supply chain as possible,” Lang noted. “We’re doing this for ourselves and the people who produce for us, but there’s no question that customers are going to start to ask more and more questions and put more pressure on suppliers about how well they control their supply chain.”

“We’re still a relatively small player, but we’re growing as a brand and as a company and we’re finding suppliers more open to the things we’re looking to do — whether with our push for organic last year or the move to disclose everything there is to know about the supply chain,” said Andreas Ahrman, international sales and marketing director.

The sustainability push also is evident in Nudie’s network of stores. Ten are operated by distributors and five, all in Europe, by the company itself, including two in Sweden, one in Zurich, one in Barcelona and, as of last month, a 1,100-square-foot, three-level store at the corner of D’Arblay and Berwick streets in London’s Soho district, the company’s first store in the U.K. and also the first of four European units scheduled to open this year and next, with others scheduled for Amsterdam, Munich and Copenhagen. Like other stores in the fleet, as well as Nudie’s Web site and semiannual look books, the London unit gives consumers tips on how to prolong the life of their jeans and care for them in ways that will have minimal environmental impact. In an extension of an idea used in the other stores and even at some of Nudie’s points of wholesale distribution, it also features a repair shop, where consumers can bring items that have been damaged or rendered ill-suited because the owner has gained or lost weight.

Ahrman said even if it might result in fewer repeat sales, “we want to extend the life of the product.”