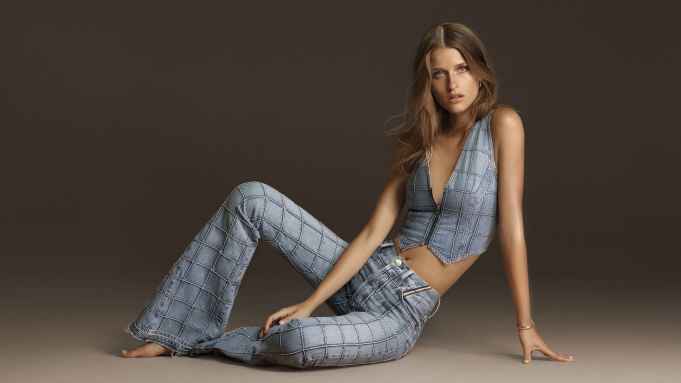 On and around the spring 2018 runways, denim was a key story in Paris. The iconic fabric was seen in every shape, color and mood imaginable. For some, like Belgian brands Filles à Papa and Los Angeles based Jean Atelier, it was a question of style; for others, it was a space for innovation as seen with MYR and François Girbaud‘s capsule for Closed, the brand he founded in 1968.

Los Angeles-based Jean Atelier, the brainchild of Citizens of Humanity founder Jerome Dahan and designer Noam Hanoch, is creating newness in the designer denim category. The brand, launched this fall exclusively at Barneys New York and FWRD Elyse Walker, was opening up to expanded distribution for spring and staged its first presentation in Paris. Inspired by denim’s Seventies heyday with just a soupçon of a Nineties edge, the collection focused on sexy, form-fitting shapes and craft finishes.

Bustier bodices, patchwork cropped tops and flared jeans were a large part of the lineup, in which standouts included items using an extinct mattress-making technique to create a square grid of seams on wide jeans and a fitted waistcoat. Just a season in, the label’s collar-shaped “Flip” waistline has already become something of a signature, with influencers including Olivia Culpo spotted wearing the design, available for spring in a striking red waxed denim.

Denim guru Adriano Goldschmied has invested in MYR, an innovative digital design tool dedicated to denim that was presented earlier this year at the Denim PV trade show in Paris and is now ready to hit the market. Conceived to simplify the denim design process by denim experts Umberto Brocchetto and Valter Celato, it avoids prototyping stages, simplifying customization and creating a digital link between designers and garment makers. Goldschmied’s Los Angeles-based House of Gold agency will be the official distributor of the software in North and Central America.

Belgian brand Filles à Papa — “Daddy’s girls” — is ramping up for expansion and relying on denim to do so. The “It” girl favorite, founded in 2012 by sisters Carol and Sarah Piron in Liège, has been spotted on Hailey Baldwin, Chiara Ferragni and most recently Barbara Palvin at the CR “Party like it’s 1999” shindig. Titled Exotica, their latest collection is a hymn to karaoke culture: a brash clash of Instagram-worthy shapes and layers with a distinct Japan-meets-Nineties vibe.

Jacket lapels break out of a denim vest, a kimono top splices a ruffled minidress, sweatshirts have their necklines cut so low as to be almost gynecological (if one forgets to wear anything underneath). It could be vulgar, but the Pirons impart a don’t-care attitude in their wares that chimes with the here-and-now. There’s even a cat meme, lifted from the Internet — Sarah Piron said she didn’t mind their work being dated to a particular year, going as far as to print 2017 on the labels. Best of all was their denim — cropped jackets, bejeweled bodies — but foremost was their twisted jeans, with one half back-to-front, introduced with resort.

For its 40th anniversary, German denim brand Closed has tapped founder and first creative director François Girbaud for a collaboration for spring 2018. The veteran designer is passionate about denim and more so about innovation. “Since 1989, when I realized how unsustainable denim treatments — such as stonewash — were, I’ve been fighting for ecologically sounder ideas,” said Girbaud, who worked with Kanye West on several projects around Yeezy.

The story is therefore not in the shapes, a tight offering of T-shirts with reflective and glow-in-the-dark motifs, ample workwear and well-cut denim, but in the warp stretch and other clever technical legerdemain. Consider Closed a gateway into Girbaud’s other work in denim. True to his idea that “premium denim is dead,” the line is democratically priced, ranging from 179 euros for a pair of jeans to 599 euros for a trenchcoat.