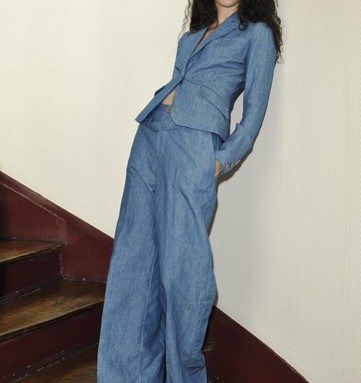 PARIS — Designer Earl Pickens intends to weave a little luxury into the denim market with a tailored collection of “Made in France” denim, carrying price tags as high as 2,500 euros, or $3,500.

The Chicago-born designer, who created a line for Lee Cooper last summer and worked 17 years for Jean-Charles de Castelbajac, most recently as head of the design studio, is readying a 60-piece collection billed as “street couture” under his signature label Url Pickens. The collection will be shown during couture presentations here next month.

“When Tom Ford did denim with floral, there was an explosion everywhere. Denim became luxurious,” Pickens said. “Then in 2000, along came rap and denim got huge, literally, the pants were huge. We want to make it a little bit luxurious, not in the five-pocket sense. The idea was a collection that’s tailored, with beautiful suits made in denim.”

Pickens said there have been “a lot of false starts” regarding denim during his 24-year career. His first signature denim foray at Castelbajac was affected by the retail downturn after the Sept. 11 terrorist attacks. For Url Pickens, he turned to Bocage Avenir Couture and Vendée Couture, a factory based in the Vendée region in western France that specializes in high-end women’s wear for the likes of Hermès and Louis Vuitton and for which the Pickens line represented the first complete denim collection.

Using fabrics from the back catalogue of cutting-edge Japanese mill Collect, Pickens took advantage of some 70 seamstresses’ know-how, plus the factory’s specialties, such as smocking that comes into play on tops and leggings.

Highlights include a suit combining lightweight flared pants with a fitted jacket or a double-breasted white woven coat with indigo trimmings that lend it a sailor-type look. The stiff fabric’s tight weave gives it a protective quality. The fabric is purportedly used by firefighters in Japan.

Cropped jackets are fitted with French seams or silk piping, while a stretch denim jacket features a foil print and stitching that looks done by hand. Resin-printed bolero tops and dresses appear to be made of anything but cotton. Fabrics, meanwhile, have been taken out of their traditional role. For instance, chambray shirt material is used for a suit.

Pickens hopes consumers won’t be daunted by prices that top 2,500 euros, or $3,500, for the coat, while jackets start at 900 euros, or $1,260, and pants from 500 euros, or $700. Keeping the collection manufactured here is already winning political points. Former presidential candidate Ségolène Royal recently picked out several outfits.

Pickens will stage two consecutive shows with a capacity of 215 on July 6. A selection of around 20 pieces will be sold exclusively via an e-commerce site this fall.