Tuscany is looking to reclaim its status as one of the hubs of the Italian denim industry. 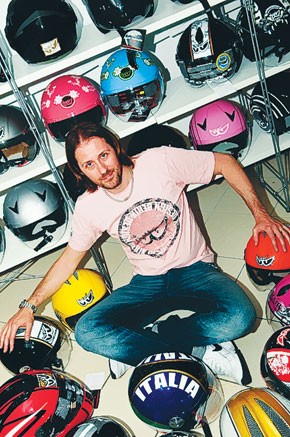 FLORENCE — Tuscany is looking to reclaim its status as one of the hubs of the Italian denim industry.

The region rose to prominence in the Seventies and Eighties with brands like Rifle, Roy Rogers and Americanino. However, throughout the Nineties competition from low-cost countries and an influx of new brands put a damper on the expansion plans of many of the area’s manufacturers. Those that have survived are now focusing their efforts on reaching higher ends of the market, revamping historical brands, investing in retailing and producing a continuous, seasonless product.

“Generally speaking, it’s a dramatic situation, and there’s been a natural selection over the past few years among those who do not have a vision,” said 40Weft designer Massimo Iozzino.

The company, based in Campi Bisenzio, north of here, is known for its cargo pants, but is launching a line of denim jeans under the Fourafew label in May and positioning it at the high end of the market.

“The goal is to create a brand because this is what customers are looking for,” said the line’s other designer, Leopoldo Durante, who has worked at Evisu and Lapo Elkann’s Care Label brand.

Fourafew will retail at 150 to 180 euros, or $220 to $263 at current exchange, and will target 200 points of sale around the world. There will be a continuous model in light and dark indigo and black and white, with a pony hair label on the back and metal details.

“We have lowered the position of the pockets, so that pants look low-waist, but they are not,” said Durante.

The company is also working on its own store, as wholesaling is increasingly a tough business.

“There is a serious crisis affecting many retailers here whose budgets are lower than in the past,” said Durante.

This has caused some brands to cut back on the size of their collections, frustrating buyers.

“There are definitely problems with wholesale distribution,” said Riccardo Bernocchi, who founded Berik seven years ago.

Initially conceived as a sportswear line for motorcyclists, Berik has evolved into a total-look collection with a strong denim component, often inspired by the world of motorbikes. Some of Berik’s styles include removable protections on hips and around knees or curved on the legs, reminiscent of pro bikers’ suits. The label seeks to balance its roots with a feminine style, using delicate golden embroideries or stitching.

Because of its appeal to a specific customer, Berik started working with more forward-looking specialty stores. At the same time, however, the company, which is part of Hong Kong-based Green Star group, has invested in its own stores in Italy, Japan, Spain and Hong Kong. Coming up next, Bernocchi is looking to open a store in New York. In the U.S., the line is already known for its endorsement of supercross biker Ricky Carmichael. Berik invests between 5 million and 6 million euros, or $7.3 million and $8.7 million, in sports sponsorships.

Bernocchi has turned to Turkey and China for production, creating Berik Town in Hangzhou, where he employs 3,000 workers. Currency exchange rates have not posed a significant problem for Berik, which buys in dollars and mostly sells in Europe in euros. Bernocchi, however, said he’s seen costs rise 20 percent in China and problems connected to power and gasoline shortages there, especially now with round-the-clock construction taking place in preparation for the Olympics in August. Washes are done in Italy, with Veneto-based Martelli.

“The trend over the past couple of years was toward dark jeans, but this is a consequence of the economy,” Bernocchi said. “Washes cost a lot and the more treated the pants, the more expensive they are.”

Dionisis Kapsaskis, head of marketing and sales at Uniform, said the difficult economy could steer European consumers away from more expensive premium American brands. As a result, there is an opportunity for more affordable European labels to gain a foothold.

The Staff Group of Greece took control of the historical Italian brand five years ago and is working on revamping and repositioning it with the help of its Italian partner, the Castri family.

“The brand remains Italian,” Kapsaskis said. “The Made in Italy label is the biggest in the world. You can do anything with it.”

Kapsaskis views licensing, marketing and retailing as the most immediate ways for Uniform to further penetrate the market and build the brand’s awareness. The company has signed a licensing deal to produce a Marlon Brando by Uniform line of jeans and T-shirts and is looking at opening a store in Milan by 2010.

“Retail is the future,” said Kapsaskis. “This is the only way to feel secure, to reach your final customer and show the DNA and concept of the brand.”

Americanino’s new owner, Arezzo-based Meta Apparel, is hoping to reinvigorate the historic brand and use its already established identity to allow it to move into new product categories.

“We want to continue to be known for our denim, which is our core business, but, at the same time, we are working on building a total look,” said Andrea Sassi, son of owner Luciano Sassi.

Nicola Masino, commercial director, said when overly embellished and heavily treated pants were in fashion, many new brands entered the scene. Now that the trend is toward a cleaner, more basic product, “customers are going back to more historic brands,” he said.

Production is done in Morocco and in Italy’s Veneto and Marche regions. Retailing between 60 and 120 euros, or $88 and $176, Americanino targets the medium-range of the market.

“I am convinced we have potential with both ends of the spectrum and can reach out to an affluent customer who can afford a designer brand, but buys a good product when she sees the quality,” said Masino.

Francesca Bacci, who took control of Shaft Jeans six years ago, also believes in the strength of a long-established brand. To mark Shaft’s 40th anniversary, the company will relaunch the French Shaft Toujours label.

“This is an authentic brand with contemporary fits and of-the-moment innovations,” said Bacci.

She is aiming at a niche market, wholesaling jeans for between 60 and 180 euros, or $88 and $263, and experimenting with organic denim, cashmere and precious details.

“We must distinguish ourselves with a personality,” Bacci said. “There is so much denim around.”