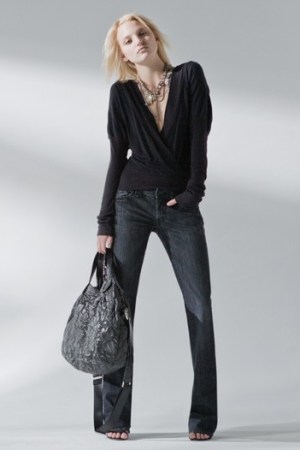 The boutiques and specialty stores that helped build some of the premium denim industry’s biggest names are being given renewed attention this fall.

While still representing the biggest volume opportunity for premium jeans brands, months of heavy discounting at department stores have taken some of the shine off the channel. In a depressed retail environment, the need to get quicker reads on what products are working has swung the pendulum back in favor of specialty stores.

Seven For All Mankind and J Brand have been the most notable labels to come out with specialty store-only brands for fall. J Brand Boutique emphasizes exclusive washes and wholesale prices that run at least 11 percent more than the starting price for the flagship line.

Jeff Rudes, who co-founded J Brand with Susie Crippen five years ago, told WWD in February that there was a desire to bring customers back to boutiques.

“We want the line to be sold and romanced the old-fashioned way, with service and trying it on in the boutique,” he said.

Seven For All Mankind will introduce Premiere 7 exclusively to independent retailers, offering product priced between $174 and $198 and featuring special fits, washes and labeling.

“This is commercially priced product that specialty stores can build volume on,” said Topher Gaylord, president of Vernon, Calif.-based Seven, a unit of VF Corp., during the Project Las Vegas trade show. “They don’t want to give all the volume to department stores.”

That said, volume is likely to be difficult to come by in the specialty channel, particularly in the near term. Boutiques have been hammered by the reeling economy and extreme discounting at major department stores in their areas. They have seen their credit capacity evaporate and many have closed their doors. The best glimpse of exactly just how dire the situation had become was presented in True Religion’s financial results for 2008.

“Sales to [U.S.] boutiques in the fourth quarter declined 36.3 percent compared to the prior-year period,” said Michael Buckley, president, during a conference call with analysts. “As economic conditions worsened throughout the year, we saw a corresponding negative trend in sales to this channel. We suspect that some of the consumers that previously purchased True Religion merchandise through this channel shifted their buying to majors and our own retail stores, as boutiques were not always able to offer the newest styles.”

True Religion’s U.S. boutique sales were down 11 percent for 2008 and management anticipates its American wholesale business will fall between 17 and 19 percent in 2009, again driven largely by declines in the specialty store channel.

Boutique owners have welcomed the offerings from J Brand and Seven. Lawrence Scott, owner of Pittsburgh Jeans Co., has seen some brands lose their value due to overexposure.

“There’s so many brands now that are so widely distributed that it’s killing the longevity of the brand,” said Scott. “There’s certain ones we’re cutting back on because they’re just too accessible.”

Scott said the boutique-only product he’d seen was distinct enough to stand out from the now more generally conservative offering at department stores.

“Stores are going deep into their money makers and shallow with their marginal brands,” said Scott. “My prediction for fall is it’s going to be a sea of basics out there. Whoever doesn’t take a chance on a special item, they’re going to be the losers.”

Thomas George, owner of three E Street Denim stores in the Chicago area, also feels the new product from J Brand and Seven can provide a point of distinction for his stores.

“As we’ve seen with several different brands that have spread themselves a little broad, there still is this romance in having something unique and different,” said George.

The boutique-only offerings from J Brand and Seven are appealing to owners because they have greater confidence in their ability to develop, produce and deliver their product. New product with a lower risk factor is something few retailers can pass up in this economic climate. George also expects J Brand and Seven to offer marketing support that emphasizes the limited nature of the product. Jason Verhoeven, owner and designer of premium denim brand Brown Label, said all brands targeting the boutique channel are going to run into similar problems regardless of their size.

When the economy was booming, specialty stores had to accept brands devoting attention to department stores, but Press understands how the recent spate of discounting has swept the legs out from under boutiques.

“We went past promotion for the last five months, we went into deep heavy markdowns,” said Press.

Now the boutiques may find themselves a bit more in the driver’s seat as brands that have been burned by the department store fallout decide they can live without chasing volume. That said, Press warns the whole scenario could, and likely will, repeat itself.

“Anyone who starts a boutique-only line, if it’s successful, department stores may come looking to stock the line and the cycle could begin anew,” said Press.