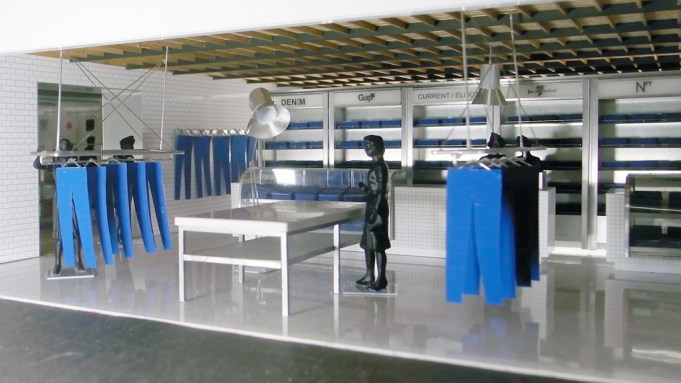 PARIS — Printemps wants to take the pain out of shopping for jeans.

In mid-May, the Paris department store will unveil a new 2,400-square-foot denim bar staffed by expert sales associates at its Boulevard Haussmann flagship, as part of the renovation of its fourth floor dedicated to contemporary brands with a casual twist.

Inspired by a New York delicatessen, the denim department will display jeans on shelves modeled to look like fridges, and host special features such as a screen in the changing room that provides customers with a snapshot of their back view, reducing the risk of post-purchase posterior remorse.

Brands on offer will range from Seven For All Mankind, Acne, Notify and Current/Elliott to J Brand, Rag & Bone and Balmain, the latter three with a department store exclusive in Paris.

“This does not exist anywhere else in the world,” said Tancrède de Lalun, general merchandise manager for men’s and women’s apparel at Printemps. “It’s fashion first, and denim second.”

The store hopes to transform an experience that many women have come to dread.

Sales associates will be trained to sell all the brands on offer in an impartial manner and give advice on which shape best suits each body type. Customers will be able to browse hanging racks labeled by style — such as “Boyfriend” or “Flare” — in the white-tiled space, which features marble floors and countertops.

To mark the refurbishment, the department store is putting the spotlight on jeans with a “Hymn to Denim” festival from May 24 to June 23, featuring a temporary Diesel café in the basement, in addition to window displays showing New York “It” Girls modeling the latest denim styles.

Having opened its renovated luxury accessories department in 2010, the store is now tackling the fashion floors one by one. The sixth floor, featuring classic brands, was unveiled in November and the third floor, featuring contemporary brands with a dressier bent, is scheduled to be completed by year-end.

The strategy is reaping dividends for Printemps, which posted a 13 percent increase in sales in 2011, versus a 5.5 percent rise at neighboring Galeries Lafayette. Revenues at Printemps last year totaled 1.45 billion euros, or $2.02 billion at average exchange rates for the period.

Printemps tapped Japanese interior design firm Wonderwall for the fourth-floor redesign. The most visible change is the addition of two stairwells at either end of the 32,000-square-foot space, designed to provide a visual reference point for shoppers and facilitate traffic between the third and fourth floors.

One circular and one square, both stairwells feature LED ceiling displays that change color according to the desired mood. Throughout the floor, walls have been removed and a slate alley guides shoppers between the airy stands, which feature honey-colored oak floors.

“We have lost some selling surface, but we will gain in flow,” said de Lalun. “We have worked to make the space less segmented, in order to provide a much more pleasant and fluid shopping experience while safeguarding the personality of each brand.”

Between 30 percent and 40 percent of the brands are new to Printemps.

At the center of the floor is a large Marc by Marc Jacobs concession. Established Paris-based labels like American Vintage, Berenice, Etoile Isabel Marant, Athé Vanessa Bruno, Zadig & Voltaire and Comptoir des Cotonniers sit alongside new finds like Bellerose, Roseanna and Masscob, which join the roster of store exclusives alongside the likes of T by Alexander Wang, Surface to Air and Gat Rimon.

Special events in May will include the launch of a capsule collection by Christopher Kane for J Brand and Manish Arora’s line of brightly colored and embroidered jeans for Notify.

The floor also features a trend lab for revolving displays of entry-price accessories and ready-to-wear, an accessories section and a pop-up store. Alongside the denim department is a section proposing tops — from T-shirts to biker jackets — designed to be worn with jeans.

The contemporary floor aims to attract not only young women, but also their mothers.

“We realized that the way women shop has changed drastically in the last 15 years,” said de Lalun. “The brands that are doing well today are cross-generational.”