Denim designers, weavers and specialist from around the world got a jump start on the summer season at the first edition of Denim by Premiere Vision. 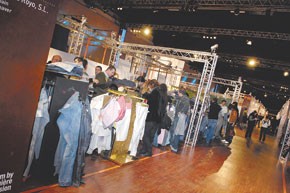 PARIS — Denim designers, weavers and specialist from around the world got a jump start on the summer season at the first edition of Denim by Première Vision.

The show, held Tuesday and Wednesday at The Docks in the Saint-Denis suburb, was an opportunity for designers to start summer purchasing early, almost three months before Première Vision’s signature show in February.

“Denim product development consists of an additional industrial step, which lengthens the industrial process compared to other textiles,” said Philippe Pasquet, chief executive officer of Première Vision. “There was a great demand to show denim fabrics at an earlier date and to unite the various specialists of the industry.”

Denim executives expressed approval of the show’s timing and with having the world’s denim resources all housed under one roof.

“Première Vision hit it right on the dot,” said Thomas Dislich, managing director of São Paulo, Brazil-based Vicunha Europe, one of world’s largest denim fabric producers. “There was a demand in the denim market to have the offering presented at an early date and all together.”

Providing denim for brands such as Calvin Klein, DKNY, Hugo Boss and Tommy Hilfiger, as well as Hennes & Mauritz and Zara, Vicunha sells 13 million yards of fabric in Europe annually — 75 percent of it denim.

Leading denim designers such as Diesel, G-Star, Replay and Miss Sixty were at the fair, as well as a handful of high-end fashion labels.

“It’s very practical to finally have denim all under one roof,” said Georgia Dant, denim designer for London-based Burberry.

Putting the focus on innovation, design, research and technology in a highly competitive market, industry specialists were looking on the bright side of the blues business.

“There is a glut of denim coming from markets such as Turkey, China, Pakistan and Brazil, which has caused the general industry to plateau but not slow,” Pasquet said. “There is still huge demand for mid- to high-end and premium denim, which makes up as much as 25 percent of the market. Designers are on the hunt for more sophisticated denim savoir faire.”

Fabrics with an artisanal feel were a key trend at the show, which was filled with natural fibers such as linen, hemp, wool and silk, as well as organic dies, finishes and fabrics like bamboo and soy. Recycled denim was also prominent for summer. Color palettes in casts of ultrabright blues with red or gray hues set the tone at the fair, while lightweight weaves for summer offered a Seventies flare.

“It was essential to start a trade show that corresponds to the dates of the creation of denim,” said Philippe Friedmann, consultant for denim think tank Rad Rags.

Friedmann agreed that premium weavers were heading back to more artesian methods, promoting irregularities in denim and working on more wearable raw finishes by using natural and organic fabrics.

“The main weavers come to us, but premium weavers and niche mills are essential for our product development and premium lines within the brand,” said Sander Van de Vecht, product line manager for denim at Gsus Denim, who looked for lightweight fabrics at Italy’s Cappio Tessuti Srl.

“There is much to uncover,” said Nikolaj Nielsen, president of Copenhagen’s denim-heavy label Won Hundred. “There is an overall handmade feel.”

At Okaya, Japan-based Collect Co., denim guru Hisao Manabe stressed the need to blend modern and traditional methods. Manabe’s hands-on approach to denim is evidenced by his blue fingernails that have been dyed from dipping denim in indigo.

“We look for the right balance between the skill of tradition and high technology,” Manabe said.