As many multibrand stores in Southern California vanish, the retailer's longevity is a testament to the lasting appeal of the Los Angeles look. 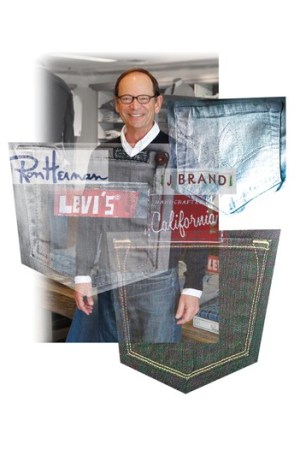 LOS ANGELES — As many multibrand stores in Southern California vanish in the recession’s wake, Ron Herman’s longevity is a testament to the lasting appeal of the Los Angeles look epitomized by jeans.

Started 35 years ago at Melrose Avenue and Crescent Heights in West Hollywood, the retailer now has five U.S. stores that stretch into three additional Los Angeles area neighborhoods — Beverly Hills, Brentwood and Malibu (where there’s a women’s and a men’s shop) — and has expanded abroad with three locations in Japan in partnership with The Sazaby League. The Melrose store covers 14,000 square feet, while the other stores average 2,500 square feet.

Owned by its namesake founder and his wife, Carol, who was a saleswoman at the store, Ron Herman has been a cultivator of emerging brands — Civilianaire, Forte Forte, L’Agence, Original Paperbacks and Ever are among those in Ron Herman at the moment — and a destination for best-in-class denim from the likes of J Brand, Levi’s, Prps and Simon Miller Jeans. Herman is the nephew of Los Angeles retail icon Fred Segal, and the Ron Herman flagship is in the Fred Segal complex on Melrose Avenue and Crescent Heights Boulevard in West Hollywood, although the complex is no longer owned by Segal.

WWD recently sat down with Herman to discuss his thoughts on his company’s past and present.

WWD: How has the Ron Herman brand been able to endure?
Ron Herman: Trust, loyalty, integrity. I found people who had a passion for denim and the most interesting thing of all was that they really believed what they were making was more or less American jeans. That was their plan, but because they were French or English or Italian, the interpretation of the jean came with a slight twist, and I found that to be very interesting, especially considering prices were not so expensive, and it was not exorbitant.

There were brands there that were really amazing, but more importantly, there were people. The Ron Herman brand, where it began and where it still is today, is about the relationships between the people who have a similar, parallel passion for this particular part of our industry.

WWD: You talk a lot about Ron Herman’s connection to the Southern California style. What is that style to you?
R.H.: Probably one of the most overused interpretations that’s used is “casual,” but I think it’s more than that.

I think it has to do with a certain way that we relate to each other as people. It’s the way in which we live here. For example, in L.A., we have so many outdoor activities because of the weather. We have mountains, beaches, deserts, agriculture, wine country — it seems appropriate that jeans are a way that guys and girls can relate. Not necessarily riding horses or mining gold or farming, but we are doing all these things outdoors, and jeans are really good for this.

And the best thing about this is there’s no breakdown between men and women. At the very beginning, they weren’t men’s jeans, and I don’t particularly care for the term “unisex,” but they were wearing the jeans and, eventually, it began to separate and focus and become more specific. That’s where we stand today.

WWD: Can you tell me about some memorable trips to explore jeans resources?
R.H.: Traveling to Italy to buy jeans — there weren’t really many people doing it back in the mid-Seventies — I came across Adriano Goldschmied. The first thing I saw was a big sign above what appeared to be other designers called Genius Group. People would put their energies together, present themselves together, and that way, small companies that absolutely no one had heard of would have some power. In addition, it would be a lot of fun.

So, who was there? Diesel, Replay, Retour and Goldie, and there were others, too. I bought every one of them. I came back to L.A. with Italy’s version of jeans, sportswear and the world of denim. Customers ate it up.

Another great story is the day I met François Girbaud. He had a shop in Paris. He was actually importing socks from America, and selling them in his shop and doing vintage clothing, and he was designing and manufacturing. We hit it off like brothers. I said, “I don’t know who you are, or what you do, but I love it.” This is instinct. I never went to school to learn to be a buyer, but I probably woke up, fell out of bed and was a buyer. My instinct said this guy has something. He was inspired by the street people who lived in the Metro. He made jeans, and they looked brilliant and worn.

WWD: When you did choose to expand, what was your strategy in building a larger retail presence?
R.H.: I started to realize that people in L.A. live in cars. We actually drive a lot. To be connected to a community and take care of the people that live in that community, I wanted to open in that community.

WWD: What do you think is misunderstood about the retail business in the different areas of L.A.?
R.H.: Stores that come to L.A. that aren’t headquartered here in L.A., I don’t think they necessarily make a mistake in their locations, but they perhaps may not understand the buying because stores tend not to buy for a specific location. It is very different when you live somewhere else. A lot of stores that come to L.A. put in denim as an accessory or a fashion item, very different than [at Ron Herman.] Here, it’s not about how many brands I carry or how many sku’s I have, its about the dedication. Jeans are not an accessory to me. I’ve never not had them. It’s not a fashion, it’s a way of life, it’s what I do. Very different than a store saying, “Well, we got to carry a few jeans.”

WWD: Tell me about how you decided to go global.
R.H.: There was time when people globally began to shine their spotlight on L.A. It’s natural that I would come up as part of their search. When things felt so bleak to everyone else, I felt like a shining star. This company in Japan approached me. I have the right team of people because I believe that relationships are how I began, how I existed and how I continue to persevere. I have close relationships that I developed through the hard work. I enjoy having relationships with the owners and designers. Maybe that’s what I love most.

I met with the people [at Sazaby League.] The language was difficult, but we hit it off. If I was willing to actually go there, do the work, be part of it, it would be more than a license. And I did, and the company believed in me. And they invested and, today, it’s one of the most successful retail ventures in Japan, and we continue to grow.

We have three stores in Japan. We actually opened a store on the day of the earthquake, on March 11. I was in Paris at the time, and I called and said, “We are going to have to cancel the opening.” The Japanese are remarkably strong people who have a different sense about tragedy and suffering and getting through difficult moments. The attitude was, “No, we have to produce a strong face and we have to be there for the people.”

We combined our efforts, stood our ground and opened our store, and the support was unreal. Since that day, for the last several weeks, our business there has been even better.

WWD: What are your goals for expansion in Japan and elsewhere?
R.H.: We are opening up two more stores there this year, one of them at the beach. I believe that Japan will set a certain global presence.

I am hoping to take this somewhere besides Asia. I would like to do Ron Herman in parts of the world under a similar circumstance with good operators. Maybe we should be in the Caribbean, by a beach.

I don’t want to go to a downtown community and have to buy heavy clothes because it’s snowing. I don’t think that’s what you would want to see. I would rather take pinpointed, focused Ron Herman and bring it to another area. It could be Brazil, it could be Australia, where they already are living the lifestyle. I just bring the L.A. thing.

WWD: In Los Angeles, multibrand stores suffered a lot in the recession. Why do you think you’ve been able to overcome that?
R.H.: A multibrand store has many important parts to it. It has a personality and a point of view. I make my selection. I don’t have a lot of buyers. It’s me and my wife and two other guys that have been with us for 15 years. We don’t just buy a brand because it got famous or it advertises. The idea of a multibrand store, where a person goes out and does the things that I did in the beginning, will always be valid.

WWD: How has the advent of online shopping impacted you? Do you shop online?
R.H.: Yeah, I do, but I don’t buy clothes online. I buy coffee online, space heaters, things like that. I do a lot of research online. I may go look at restaurants in L.A. There is a lot of good research that you can do online. But, at the end of the day, I don’t shop for the things that I want to be an experience. I think shopping is one of our forms of entertainment. It’s kind of an enjoyable thing to do.

WWD: What’s happening with the Ron Herman Web site?
R.H.: About two months ago, I came to the conclusion that, at this point in my career, I really want to represent what I am about. What does the brand Ron Herman mean? What do my stores look like? What do I do everyday? I need a site that reflects that philosophy.

Also, I am going to really edit it. I’m not going to offer you every single thing you might get in my store.

WWD: What is the thing you’re happiest you said no to?
R.H.: Acid wash jeans. They are aesthetically unpleasing.

WWD: Do you ever think about retirement?
R.H.: I used to. We all set those certain goals or benchmarks for ourselves. I did that with myself and then I realized that this isn’t just what I do, it’s who I am. I want to continue to be alive. I don’t know if I would feel physically and mentally this alert, I don’t know if I would be as happy, if I didn’t have this in my life. I’m not much of an observer. I like being a participant. I think that life is a participant sport and I don’t want to be on the sidelines.

WWD: Is there any business person, whether in jeans or otherwise, that has influenced the way you do business?
R.H.: Many years ago, I was in the lobby of a hotel in Paris and there was a collection of sweaters. They were from Japan, and they were very, very expensive. I thought, “I’m just staying here. I don’t know the collection.”