The Italian brand has introduced an environmentally friendly capsule collection based around Laser Wash. 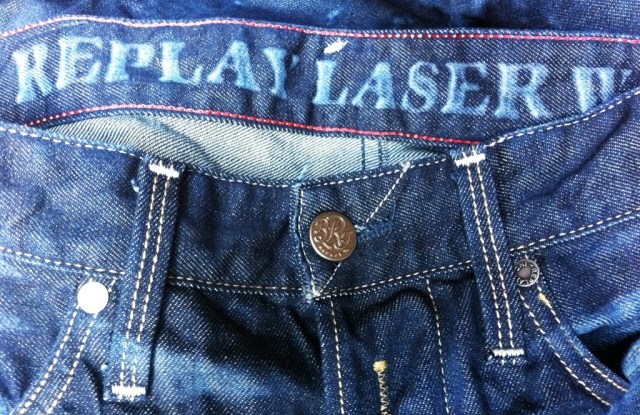 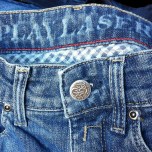 Four years ago Replay began offering denim made with organic cotton, and two years ago the company started using ozone washing machines, which require less water than machines traditionally used in denim manufacturing. Laser Wash is another step forward, as it uses no water at all and relies exclusively on lasers to achieve a “contemporary vintage” look, explained Matteo Sinigaglia, chief executive officer of Fashion Box, Replay’s parent.

“It’s quite simply a laser machine,” he said.

The Laser Wash capsule collection is composed of two pairs of jeans available in two different washes: a medium tone, and a dark tone with extra gray shading to emphasize the used look. The denim fit is skinny for women and slim for men. At 169 euros, or about $225 at current exchange, per pair, the price is not noticeably higher than that of other Replay jeans, a spokeswoman said, as the company deliberately sought to counter the notion that sustainable clothing is expensive.

It’s been a busy year for Replay, which celebrated its 30th anniversary this year. In November, the brand renewed its partnership with the MTV European Music Awards, held in Belfast, Northern Ireland, and introduced a special 30th anniversary denim collection with Cotton Council International, a nonprofit group that promotes American cotton. Laser Wash, which hits Replay stores in December, is the company’s latest endeavor, which it hopes will lure holiday shoppers with strong environmental awareness.

Noting Replay has always prioritized innovation and research, Sinigaglia said that although denim companies are part of the industrial sector, and as such pollute, Replay is concerned with minimizing its environmental impact and finding new ways to be eco-friendly. “It’s the company’s philosophy,” he said. “We make products that we like and that we are proud of.”

In its 2011 Meaningful Brands survey, Havas Media, a global media network, found that 89 percent of consumers worldwide now expect companies to be proactive in solving social and environmental issues, and 51 percent say they would reward responsible companies by choosing to buy their products.

Although Sinigaglia acknowledged that European customers are increasingly responsive to brands that advertise sustainable production, he insisted that Replay was simply intent on doing the right thing. “We didn’t really focus on the marketing,” he said. “We wanted to limit the damage we were doing, and of course if you communicate that you are using these eco-friendly techniques, it can influence some customers’ purchases.”

Sinigaglia, who spent nearly two decades living and working in Hong Kong, added that while many people do not associate fast-growing Asia with ecological sensitivity, he believes change is under way.

“I saw continuous development over 20 years,” he said. “In recent years, I’ve noticed much greater attention paid” to environmental issues, not only with consumers but “in terms of political strategy. [Governments are] putting in place a strategy to clean up the environment.”

To match its eco-friendly denim collections, Replay has been steadfastly introducing a new global visual identity in its European stores. London’s new Carnaby Street location follows Florence, Milan, Paris and Barcelona in adopting Replay’s new store concept, which features a hand-painted shop exterior, walls in reclaimed timber and molded tin, industrial water tank tables, sales points made to look like old factory workshops and rivets and buttons displayed in glass jars. The stores are intended to evoke the great outdoors and a close relationship between art and material.