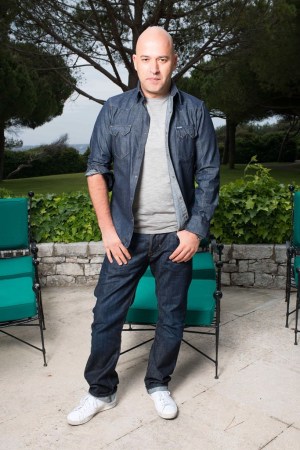 The eight-piece line for women and men was unveiled on Saturday ahead of Pigozzi’s annual brunch during the Cannes Film Festival. Guests including Robert De Niro, Harvey Weinstein, François-Henri Pinault and Salma Hayek gathered at Pigozzi’s villa here, amid pieces from his extensive collection of contemporary African art.

Pigozzi, owner and founder of Limoland, said it was another celebrity who gave him the idea for the denim line, which includes jean shorts slashed at the front to reveal brightly printed pockets.

“I saw a picture of Gwyneth Paltrow sitting on a high stool, and she had cut her jeans into shorts, and these hideous white pockets were sticking out, and I said, ‘This is a horrible thing.’ She’s a beautiful girl, beautiful legs, and these two white things? So I said, ‘I’m going to change that,’” he explained.

The collection also features jeans and shirts lined in the same colorful print. Like the Mr. Limo logo stitched onto the jeans’ back pocket, the pattern used is based on the work of the late Tanzanian artist George Lilanga.

“It’s the first time I’ve seen them, and I’m very, very happy. It’s really fun and it’s exactly what I wanted,” said Pigozzi, adding that future collections would bring different inspirations. “This is the beginning of what I hope will be a long collaboration.”

Matteo Sinigaglia, chief executive officer of Replay, said the collection would be distributed in about 20 Replay units and 80 independent stores worldwide starting in November, with prices ranging from $200 to $250.

Replay is planning a product-driven marketing campaign, since the general public is mostly unfamiliar with the French-born Pigozzi — a venture capitalist, philanthropist, photographer and collector who is a fixture in society circles.

“The line is outstanding and we see it having an immediate impact based on the colors alone,” said Sinigaglia. “It’s something so soft, so nice, and very mature as a concept because it is a positive, unconventional denim.”

Limoland previously had collaborated with Yoshida Porter on bags and with K-Way on outerwear.