Europe’s leading jeans retailers are betting that not everything will be left on the racks come springtime. 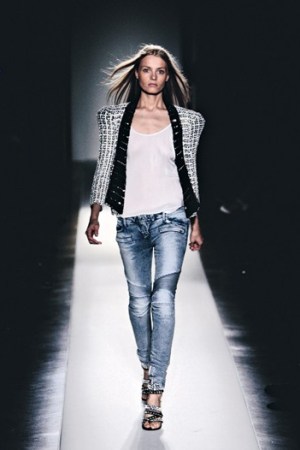 Europe’s leading jeans retailers are betting that not everything will be left on the racks come springtime. The following are the denim collections they’re backing as sure winners for next season.

STORE: 14oz., Berlin
SPRING PICK: Prps, New York
“It’s made from the finest Japanese denim, with exciting finishes,” said manager Roberto Gonzales. “The existing men’s collection was getting popular when worn by celebs, like Katie Holmes, who borrowed it from her husband. It’s famous for its boyfriend cuts. We’re expecting a big success for the upcoming women’s line.”

STORE: Citadium, Paris
SPRING PICK: LTB Jeans, Istanbul, Turkey
“The prices are very attractive, around 65 euros [or about $83 at current exchange] to 69 euros [or about $88], just above Cheap Monday. And the cuts are great,” said Hélène Follot, denim buyer. “Very, very high waist — be it in the skinny or in the flares. We’re going to offer an edited choice: three or four washes and three cuts — quite straight, slim and flared.”

STORE: Harvey Nichols, London
SPRING PICK: Current Elliott, Los Angeles
“It has already had a great celebrity following and a permanent waiting list at the store,” said Averyl Oates, buying director. “It’s quite a refreshing L.A. denim line in that styles are cute and look like they’re vintage, but are actually made to be flattering and comfortable — unlike actual vintage. The baggy boyfriend jean has had the most press. It’s been designed like a Levi’s 501 from the Fifties, but with a slightly higher rise and comes in a messy, destroyed wash called Super Loved, a great alternative to uncomfortable skinnies. Also worth a mention is the 1989 Legging. The denim is a superstretch, feels very soft and feels as comfortable on as a legging, but with a rebellious look in the denim.”

STORE: Royalcheese, Paris
SPRING PICK: Edwin Japanese Vintage Collection, Basel, Switzerland
“They have a vintage Japanese line we’re selling exclusively in Paris. All the finishes are done by hand, all the sewing cannot be done by machine, which gives a beautiful, really high-quality finish. It’s for connoisseurs because to buy a jean for 290 euros [or $371], you need to know why you’re buying it. The weave is really thick and it ages well. There’s a treatment, a bit like a wax, which means they don’t shrink when you wash them,” said owner Catherine Leung.