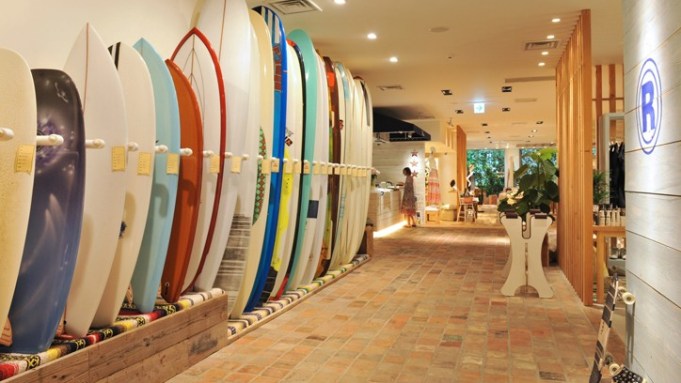 The store, which originally opened in 2009, has more than tripled in size to cover a sprawling 11,000-square feet. It now includes a flower shop, a jewelry corner, a self-service café and a selection of surfboards. Obviously there are still plenty of clothes and accessories but there are also home furnishings, jewelry and personal care items. It opened to the public over the weekend.

The expansion comes at a delicate time for Japan, which is still recovering after the devastating March 11 earthquake and tsunami. Fashion events and store opening parties have been fairly scarce in the capital city over the past few months.

“A lot has happened [that is] out of our control. I think maybe that makes the timing [of the store expansion] even more special,” Herman said, explaining that his Japanese partners, the Sazaby League, decided to press on with a Kobe store opening the very same day as the disaster. The Sendagaya expansion also went ahead as scheduled, with remodeling beginning at the end of March.

“We’re not just a luxury designer brand. I think we’re actually a place that people want to go…need to go. I think we satisfy more than just a need for fashion,” he said.

While Herman said he is excited to be experimenting with new categories in the expanded store, he explained that jeans, t-shirts and other casual clothing will continue to be the core of the company’s business and message.

“All of that that’s in that original store is the core. These [concepts] now help support that. These help complete the story,” he said. “We don’t lose sight of what our most important thing is. I want [new categories] to feel a sense of continuity to the family of Ron Herman.”

And continuity certainly isn’t missing from the newly expanded store, with its white walls and light-colored wood floors and furniture. Eye-catching fixtures include a stone basin with working taps where customers can sample hand soaps and a cozy fireplace nook in the café area. All of these things, Herman said, were designed with the brand in mind.

“It’s more than a brand; it’s a brand that represents a culture. It is not a fashion brand. It’s a culture brand; it speaks to people about their lives. It’s relevant; it’s casual; it represents the spirit of California; it’s aspirational; it has perception more than reality for people.”

Herman and the Sazaby League operate three stores in Japan and they are planning on opening another two boutiques within the year: another in the Tokyo neighborhood of Yurakucho and one near the beach in Kanagawa prefecture. Still, Herman said he’s being attentive not to expand too quickly.

At the same time, Herman said he’s found the perfect partner in the Sazaby League.

“It’s like a marriage…you hope it ends up to be much more than just a shower, a party and a honeymoon. But if you’re lucky it turns out to be much, much more,” he said. “This has turned out to be strong relationships, close ties, friendships…I think they’ll last a lifetime. For sure.”