Seven For All Mankind denim brand to open first European store in Paris on May 23. 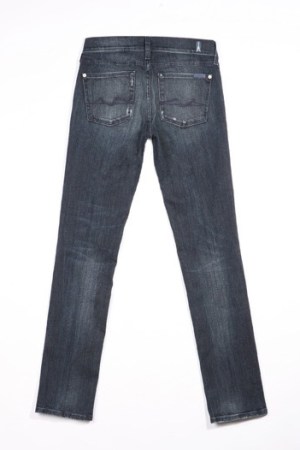 Seven for All Mankind is looking to capitalize on surging sales in France with the opening of a branded store in Paris, its first in Europe.

France is shaping up to be a foothold for Seven’s European expansion efforts, parent company VF Corp. has noted. The premium denim label achieved 50 percent growth in France in 2008 and is looking to build on that with the opening of its store in the City of Light on May 23.

Karl Heinz Salzburger, president of VF International, said he spied “very good growth potential” in Europe despite the difficult economic climate. VF International is based in Lugano, Switzerland, and Salzburger is in charge of growing all VF brands, including Seven For All Mankind, in Europe, the Middle East, Africa and the Asia Pacific region.

Salzburger acknowledged economic conditions have spurred a return to historical brands such as Wrangler and Lee, also owned by VF. However, he believes Seven is “unique, because it’s premium and sophisticated, made in L.A. It’s about comfort and fit, but it’s also about aspirational values.”

Salzburger said the label grew 10 percent in 2008 to sales of 58 million euros, or $85.2 million at average exchange, in Europe, the Middle East and Africa, adding he expected a further spike in 2009. France accounts for 10 percent of the brand’s European sales, while Europe overall accounts for 30 percent of revenues.

VF, which took control of the brand in 2007, reported first-quarter results last month and said Seven’s wholesale business in the U.S. and Europe was hurt by the weak performance of major department stores and the specialty store channel. Salzburger underscored how the brand will continue to work with wholesale partners and, while investing in its own retail network, distribution will continue to be highly selective.

“We will never open too many stores,” he said.

Since November 2007, the brand has opened 18 boutiques in the U.S., 13 in Asia and one in Brazil. At the end of May, stores will open in Dubai and Kuwait.

The complete range of Seven For All Mankind collections for men, women, children, denim, sportswear and accessories will be available at the 756-square-foot Paris flagship, located in the city’s prestigious Rue Saint-Honoré. While modeled after the brand’s main concept store, the Paris boutique will have a “warmer” feel, with a more opaque Zebrano wood. A large wood table will stand at the center of the store, the walls painted in the brand’s classic gray, the floors covered with a special white resin and slide-away changing rooms.

Salzburger said it was necessary to have a flagship in “the city of fashion, and in such a prestigious location, which expresses the values of the brand.” He declined to provide a sales estimate for the store’s first year.

To mark the opening, a 200-piece limited edition of “Seven For All Mankind Loves Paris” jeans will be available exclusively at the store. The jeans have the brand’s classic squiggle on the back pockets, but the standard label has been replaced by the Eiffel Tower in rhinestone for women and embroidered for men.