Seven For All Mankind Returns to Print Ads 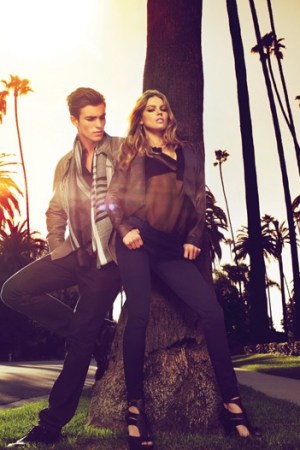 After sales declines, Seven For All Mankind has turned around its top line this year and is aiming to spur growth with an ambitious, multimillion-dollar advertising campaign for fall. It will be the first print campaign for the VF Corp.-owned premium denim brand since fall 2008.

The campaign, which was shot by Mert Alas and Marcus Piggott and features models Masha and Julian Schratter, will break in September books, in addition to an outdoor and online component. The media buy comprises 15 titles, including Vogue, W, Vanity Fair, InStyle, Elle, GQ, Details, V and Nylon. The ads also will run in Europe and Asia.

“We’ve had limited budgets [because of the retail environment] over the past year and have been opening stores so quickly that our marketing dollars were focused on that,” said Leilani Augustine, vice president of marketing at Seven For All Mankind, adding that the brand is celebrating its 10th anniversary this fall. “This new campaign is a return to magazines for us, which we think will really help drive traffic to our stores.”

For the first time, the brand tapped an outside agency to create the ads, New York-based Chandelier Creative. The agency helped bring in Alas and Piggott, who are known for their high-fashion work for clients such as Louis Vuitton, Giorgio Armani and Miu Miu. Styled by Alex White, the images were shot on Sunset Boulevard in Beverly Hills as the sun was setting, capturing the area’s famous “golden hour” and giving the ads a radiant hue.

“Since we haven’t advertised in a while, we really wanted to elevate the brand this season, which is what Mert and Marcus have been able to do,” Augustine said.

Billboards will go up in New York and Los Angeles, in addition to mall kiosks in key markets where Seven For All Mankind operates stores, such as Miami, Dallas, Houston and Nashville.

The company has been steadily investing in retail, opening 21 U.S. stores in 2009 and another five this year. Another four are planned by yearend, bringing the total domestic store count to 38. Overseas, plans call for the number of stores to grow to 77 owned and partnered units by December.

According to a VF Securities and Exchange Commission filing, Seven For All Mankind reported double-digit growth in the direct-to-consumer business in the first quarter of this year, as well as a return to overall sales gains, after an 8 percent decline in total volume last year.

To help turn things around, the company invested in intensified brand research this year, tapping Chicago-based Teenage Research Unlimited, which specializes in both teens and young adults. “We needed to put some guardrails around the brand and clarify what the brand is and what the brand is not,” Augustine explained. “We did a ton of customer segmentation work. We aren’t vintage or heritage. We are sexy and sophisticated, and that’s really what this new campaign showcases.”

Among the most interesting findings was that Seven For All Mankind’s core target audience still gleans most of its fashion direction from print magazines. “There’s so much talk about digital and social media, but what we found out is that this customer, male and female, still gets most style advice from traditional print media,” Augustine noted.

That said, the fall campaign also includes viral videos from the advertising shoot that will appear on Facebook, YouTube, blogs and the Seven For All Mankind Web site, which will undergo an overhaul in August.