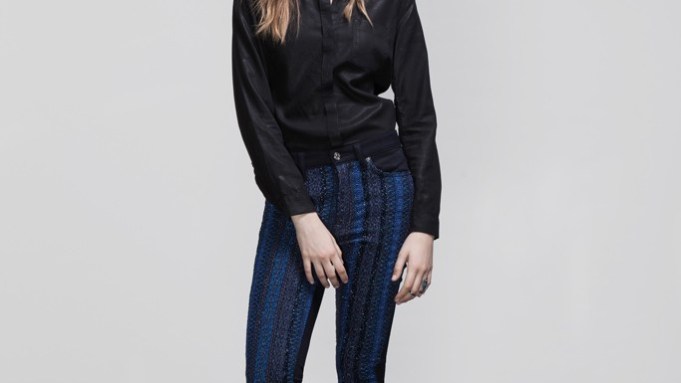 Denim has entered the high-tech age, and Seven For All Mankind is tapping into the trend.

The Los Angeles-based premium jeanswear brand, a centerpiece of VF Corp.’s contemporary brands coalition, is rolling out a series of innovations for fall, holiday and spring to distinguish its offerings in a crowded marketplace. Seven has collaborated with French mill Malhia Kent, creator of fabrics for the likes of Chanel, Yves Saint Laurent and Proenza Schouler, on a capsule collection of tweed pieces; built upon its Slim Illusion technology with Second Skin Slim Illusion to provide stretch recovery, and tackled the issue of color fading in denim with its Triple Black and Triple Blue programs.

Seven is the first premium denim brand to work with Malhia Kent, and there are four pieces in the fall collaboration that spotlight the mill’s tweed fabrics, which are known for being both durable and lightweight: a blue metallic jacquard stripe tweed pant, a silver geo tweed pant, an Egyptian gold jacquard tweed pant and a moto jacket with blue metallic stripe jacquard. The collaboration, priced at $395 for the pants and $650 for the jacket, also showcases Seven’s abilities beyond the denim category.

“This is something special that you would have in your wardrobe and would wear out to an event, a party, a wonderful dinner. It’s a more special pant and a more special piece of clothing that you would have in your wardrobe for a long time. It speaks to a designer aesthetic,” said Miguel, adding, “The expectations from our customer are that the brand is not just about denim. It is about pants, and we need to continue to push the limits on what that means.”

Calling it a franchise for Seven, Miguel explained Slim Illusion is “the baseline for what a woman expects for her jean, and it continues to do really well for us, and we continue to add new washes and finishes within Slim Illusion. Slim Illusion Second Skin is the update with 100 percent elasticity, which takes it to the next level. It is the ultimate in comfort and stretch. As you go through the day, things start happening in an average pair of jeans, like the knee area starts sagging. Slim Illusion Second Skin will move with you and hold its shape. It doesn’t have to recover because it never bags out.”

Seven is applying technology to enhance color as well as fit. Launching for holiday, the brand’s Triple Black fabric is made with construction and dye processes specifically tailored to address color loss, and it retains a vivid black color even after 40 washes. There are two styles in the initial Triple Black program: a $198 slim-fit jean, and a $328 black denim and leather jacket. Seven will unveil Triple Blue in the spring with the same no-fade characteristics as Triple Black.

Miguel said Triple Black was an outgrowth of the “quest for the perfect black jean.” He elaborated, “Some people do like the fade on their jeans, but a lot of people when they buy a jean, particularly when they are buying a dark jean, they like it to stay dark. If you are buying a dark jean that you are going to wear to the office or to dinner, you like it to stay that way.”

Seven is looking to its technological leaps to bolster sales. Revenues for VF’s coalition of contemporary brands, including Seven, Ella Moss and Splendid, were down 9 percent in the second quarter to $98.6 million. VF attributed 4 percent of the decrease to the absence of John Varvatos, but noted the rest of the decline was primarily due to weakness in its premium denim business at upscale department stores.

“I’m very excited about the early fall response particularly around our fashion. We had some early reorders, which is very encouraging. We believe that fall and holiday are going to be quite strong,” said Miguel. “We continue to want to find exciting new experiences for our customers at retail. We need to continue to offer them compelling product. That could be denim and that could be nondenim, but it is something new, something exciting, something that you don’t have in your closet.”