Kimora Lee Simmons may want to watch out. Her nieces, Vanessa and Angela Simmons, have a brand on their hands called Pastry that one day could become a... 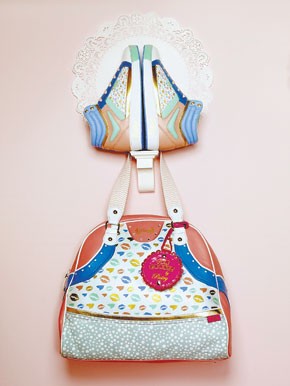 Kimora Lee Simmons may want to watch out. Her nieces, Vanessa and Angela Simmons, have a brand on their hands called Pastry that one day could become a major competitor of Baby Phat.

Vanessa, 24, and her sister, Angela, 20, are certainly moguls in the making. The two star with their family on MTV’s popular reality show “Run’s House” and Vanessa had a short role on the celebrated soap opera, “Guiding Light.”

Acting aside, the Simmons sisters’ true love seems to be fashion. The girls will launch a full line of junior sportswear and handbags for spring selling. These new categories will add to their growing empire, which already includes a casual shoe collection and falls under their father’s (Joseph “Rev. Run” Simmons) men’s wear umbrella, Run Athletics.

Pastry footwear launched in March and has performed strongly at specialty retailers such as Finish Line, drjays.com and Underground Station.

“When we brought the sneakers in and put them up, they sold like crazy,” said Jean Patrick Charles, co-founder and chief financial officer of DJ Networks, which runs drjays.com.

Today, the girls are preparing for the launch of Pastry apparel, which will hit stores such as Against All Odds, Mony, Jimmy Jazz and drjays.com on Jan. 25.

“Everything that my sister and I do, we do it because we have fun,” Vanessa said. “We had always planned on expanding into a full lifestyle brand, and now was just the perfect time to get into apparel and handbags.”

The Simmons sisters are working with the New York-based Innovative Fashion Group, a division of Adjmi Apparel Group, on the launch of sportswear, and Betesh Group to expand into handbags.

The apparel collection includes a range of styles such as satin and spandex dresses, embroidered denim jeans, stretch charmeuse tops, French terry hoodies and pants and metallic mesh T-shirts. The line comes in a range of candy colors, such as bright pink, purple, blue and yellow.

“As we move into fall, we want to introduce some more sophisticated and edgy pieces like leather jackets and things like that,” Angela said.

The handbag collection, Vanessa said, is meant to go well with the sneakers, with colorful messenger bags, hobos, bowler bags and duffels.

The Pastry apparel line wholesales from $14 to $49, and the handbags wholesale from $13 to $45. Company executives expect first-year sales volume to reach $25 million in wholesale volume. Next up, the sisters are working on jewelry and lingerie lines.