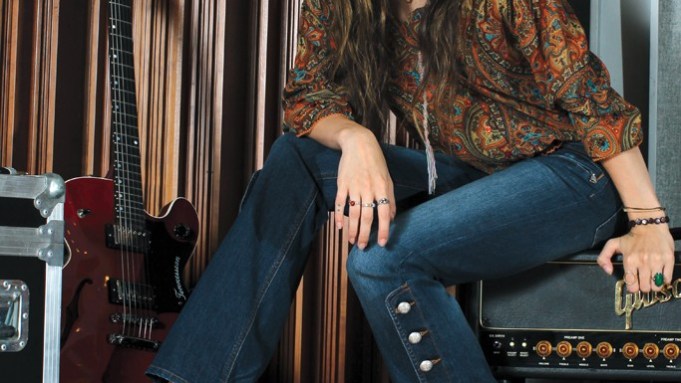 “I really love the whole concept of mixing music and fashion together,” said Andy Hilfiger, creative director and president of marketing, who unveiled his new Andrew Charles women’s and men’s contemporary collection, inspired by Tyler, at a shoot at the Gibson/Baldwin Showroom here.

Beginning next month, Andrew Charles women’s and men’s sportswear will be shipped exclusively to 100 Impulse departments of Macy’s. The marketing strategy calls for personal appearances by Tyler at Macy’s and an after party, as well as an ad campaign featuring the 63-year-old Tyler and his 22-year-old daughter, Chelsea, an artist and aspiring model. Steven Tyler’s image will also appear on the hangtags. The company is producing a series of short videos featuring Tyler and behind-the-scenes footage of the campaign shoot. Those videos will be viewable to Macy’s customers who scan the QR code of the in-store visuals using their smartphones.

“To launch it with such an icon such as Steven [Tyler] is amazing,” said Hilfiger, a musician himself who cut his teeth at Tommy Hilfiger and Sweetface Fashion Co., which did the JLO by Jennifer Lopez line. The Andrew Charles collection is being developed by Music Entertainment Sports Holdings, a division of LF USA in partnership with Star Branding. Brothers Tommy and Andy Hilfiger, Joe Lamastra and Bernt Ulmann own Star Branding.

Manufactured mostly in Indian factories, Andrew Charles, which is Hilfiger’s given name, will have rotating designers. Tyler is under contract for one year to be the face of the brand. Hilfiger hired fashion industry veteran Bubbles Bott to be executive vice president of product development and design. The company is based at Trump Tower here.

At present, women’s comprises 85 percent of the offerings. Andrew Charles will ship about 30 styles a month in women’s. The collection will be housed near such resources as Rachel Rachel Roy, Free People, Bar III and Hudson Jeans. The denim-based line, which includes wovens, knits and outerwear, retails from $59 to $189. Hilfiger described the women’s line as “very gypsy, boho-chic.” The women’s line is inspired by Marianne Faithfull, Stevie Nicks and Anita Pallenberg. The collection features lace, sheer tops and Indian embellishments. Among some of the denim styles are skinny black denim, coated denim and printed snakeskin denim.

Tyler, who is known for his colorful on-stage outfits and trademark scarves, is the inspiration for the men’s line, as well as a scarf collection that will be launched in October called Rock Scarf, inspired by Steven Tyler for Andrew Charles.

“It’s really aimed at the millenial [consumer],” said Martine Reardon, executive vice president of marketing and advertising at Macy’s Inc. She described the target customer for the line as a man or woman aged between 21 and 40 years old “who’s into fashion and inspired by all the new trends and pop culture.”

“Music is always a big part of what inspires people,” she added. She said Tyler has a lot of fans from his music days, as well as those who watch “American Idol,” where he is a judge.

“It’s a little bit of the older customer, and now the younger customer who knows him from ‘American Idol,’” she said. “It’s more of a mind-set, as opposed to an age.

“We think it will fill in a white space on our floors. It feels and looks very different from Rachel Rachel Roy and Bar III. It’s a nice complement to those existing brands on the floor today,” said Reardon. The line will be marketed through social networking, including display ads, rich media, QR codes and magazine ads, she said.

According to Hilfiger, Andrew Charles will also use Twitter, Tumblr and Facebook. The firm will launch a Web site in the next two weeks at andrewcharles.com, with e-commerce capabilities via macys.com. “Steven is a fashion rock ’n’ roll icon, and his fashion comes from the Seventies. We’ve updated that look for today,” said Hilfiger. In his own personal wardrobe, Tyler mixes leather, leopard and scarves, and is known for his animal prints and his accessories, said Hilfiger.

He met Tyler in 1999 at the “Rock Style” exhibition at the Costume Institute, which was sponsored by Tommy Hilfiger U.S.A. “I grew up on Aerosmith and Steven Tyler. I’ve always loved his music and his style,” said Hilfiger.

Hilfiger said he felt strongly about doing an exclusive deal with a retailer. “We wanted a retail partner that understood and wanted to get behind it. There’s lot of room for growth,” he said.

The Andrew Charles collection hopes to expand to handbags, footwear, jewelry and fragrances in coming seasons. Asked about the line’s volume potential, Hilfiger said, “The sky’s the limit. If it takes off we can add product categories. In the next five years, it could become a $50 million business.” However, he quickly added: “I’d rather keep it tight and right and not get it all scattered. I want to have the right licensees.”

Hilfiger said he’d also like to do a line of guitars and amps and other products “out of the norm.” As a gift with purchase, he will offer Andrew Charles headphones. Hilfiger is currently working on an album with his band, The X Brothers. It will be a mix of new, original songs and classics with a fashion theme. It’s expected to be available online through digital distributors, and tracks will be used for promotional and marketing purposes for Andrew Charles, such as downloads, or music videos featuring the clothes.

The clothing line’s logo is a guitar pick with a star on it.

Andrew Charles will sponsor monthly music nights at Dominion NY here, where a house band and different people will perform each time. Customers who purchase an Andrew Charles item can bring the hangtag, which resembles a backstage pass, to the club and will be given free admission.

Tyler, who appeared as a judge on “American Idol” last season and will return this season, is currently recording a new album in Boston.

Hilfiger believes Tyler’s popularity is at an all-time high. “We’ve always loved him, and this [‘American Idol’] took him to the next level,” he said. He said the TV show has already called for the clothes, and he plans to dress musicians and do a lot of product placement.