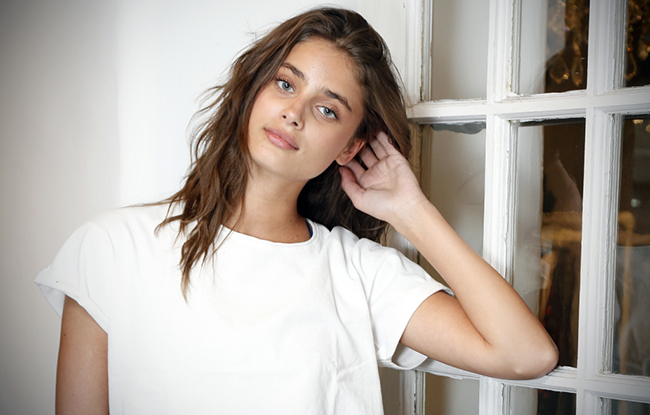 Taylor Hill, the 20-year-old “It” model and Victoria’s Secret Angel, has been named Joe’s Jeans’ front woman and collaborator.

Hill will design four capsule collections, the first of which will be in stores in April-May. Future capsules will ship in August, November-December, and spring 2018. Hill will also appear in Joe’s Jeans’ spring advertising campaign, following in the footsteps of Bella Hadid who was the company’s model last season.

The ad campaign, shot last week by Mario Sorrenti, will break in print, outdoor and digital vehicles in March.

Suzy Biszantz, president and chief executive officer of Joe’s Jeans, called the collection a collaboration between Hill and Joe Dahan, founder and creative director of Joe’s Jeans. “We liked that she’s an up-and-comer and the momentum she’s getting in modeling, but we really liked that she had a lot of energy and passion for craftsmanship, design and fabric,” said Biszantz.

Describing the experience of designing a capsule collection, Hill told WWD,  “I really loved it. I thought it was something different. As a model, you don’t really get to see this part, and I thought it was really cool to be a part of the process, and have an input, and make it my own.”

Hill came in with Pinterest mood boards and tear sheets, along with plenty of ideas of how she likes to dress. Because it will have a “buy-now-wear-now” mentality, it allows Joe’s to jump on what’s trending in the market and get it out in the market faster. The women’s capsule will be co-branded with Joe’s Jeans and Hill’s names. A separate campaign for the capsule will be shot in March.

The lineup, which has between 20 and 25 styles, features a mix of skinny and wide-leg jeans, and high-waisted ones. There are also fun shorts, overalls, T-shirts and an emphasis on jackets. Produced in Los Angeles and Mexico, the capsule wholesales from $44 to $350. The collaboration is slated for 18 months. “The idea is to keep it really tight and well edited and curated. Nothing will be in that assortment that she [Hill] doesn’t believe in and doesn’t personally love,” said Biszantz. “It’s enhancing and layering onto what we do at Joe’s already,” she said.

Jameel Spencer, division president of fashion and entertainment at Sequential, said, “We want to do something that helps advertise the brand, but also create amazing product that can be compelling and enhance the perception of Joe’s,” he said. It’s the first time Joe’s has done a capsule.

Hill used Pinterest to create mood boards to search for what she liked, such as Nineties jeans, or jeans with white T-shirts, and different washes and styles, she said.  Although she doesn’t have a design background, she said, “Before I was scouted, I was thinking of doing graphic design for college, and I took sewing classes because I was thinking of going into fashion design. I had no idea what I wanted to do, and I ended up modeling.”

In her off hours, Hill said she likes to dress “casual, but still pretty cool.

“A lot of my stuff is superbasic, but it’s all the right fit and right wash of the T-shirt — do you wear a belt or do you not — things that spice it up. For me, I love overalls, and my whole career I’ve been on the hunt for the perfect pair of overalls. For summer, we made a short, cutoff one,” said Hill.

With New York Fashion Week right around the corner, Hill said she’s never really sure which shows she’ll be walking in until the last minute. She plans to model in Europe as well.  “You get there and hope something happens. Every season, I’m always a little stressed out. I’m coming into my eighth season. I’m doing it since I’m 15,” she said. She said she was scouted on a dude ranch in Colorado. “My sisters and I were riding horses, and a photographer saw us and thought we were models,” she said.

Discussing her career aspirations, she said, “My whole career is superinstantaneous, and I’ve never really had a set plan to even do this. If I got here without it, I think continuing to do it will bring things, if I have an open mind. I have no plans, I just plan to wing it,” said Hill.

Dahan said he loved collaborating with her.  “I think she’s going to be the next “It” girl. She’s so natural, superstylish and almost seems like she’s not aware of her beauty and talents, and it’s effortless, and I love that.” Dahan said of all the celebrities and models they spoke to, “She stood out the most. She was so natural, and her relationship with Mario Sorrenti was such a natural. It was almost like bringing the Nineties back with Kate Moss.”

As far as what he was looking for in Sorrenti’s images, Dahan said, “The directive is to see the relationship between her and Mario and I want him to go back to his roots where he was really having fun as an artist. To really bring sexiness without vulgarity, to me that was important.”