PARIS — How to bring dynamism back to denim and reinvent the segment were the hot topics at the recent Denim Première Vision trade show here.

In a relatively stagnant market and a particularly tough climate for apparel retail in the U.S. and parts of Western Europe, reinventing brand identity through differentiation was seen by many as the key to attracting consumers, especially Millennials. Technology and sustainability were strong points of focus for exhibitors at the event, which ran from April 26 to 27 at the Paris Event Center.

“We want to evolve the show to give a maximum amount of input and information to the industry, exhibitors and visitors alike, to help drive change, especially through innovation,” said show director Chantal Malingrey.

“Denim originally had strong, deeply rooted values like rebellion and freedom, but new consumers just don’t have those same references,” she explained. “Customers are really changing, especially in the 18-30 age bracket. Brands need to evolve in line with this.”

Global retail sales of jeans grew 3.7 percent to $92.88 billion last year, according to data from Euromonitor International. Sales in North America were up 1.7 percent, while in Western Europe, they increased 1.6 percent.

Sales are stagnating because brands are not carving a strong enough identity, several market players observed.

“Big brands want to sell to everybody, they’ve got lost,” said one market veteran.

“It’s about finding ways to communicate to the consumer what your denim identity is,” said an American buyer for a well-known brand.

“Brands need to be themselves and not be scared to take a viewpoint,” said Tilmann Wröbel, creative director and founder and of Paris-based specialist denim design studio Monsieur T.

“Young people want to go beyond the mainstream of skinny, comfortable denim,” he said, explaining the growth in demand for denim with more character and a vintage look over the past few seasons. “The consumer is forever reinventing denim. Brands that can’t keep up are getting lost.”

In line with the show’s new positioning, its entrance was a corridor dubbed Tech Innovation Scene, featuring 10 high-tech developments.

These ranged from Dutch designer Pauline van Dongen’s recycled denim windcheater with integrated solar panels and an in-pocket charger to new exhibitor M&J Group’s highlighting of its Start to Measure software for measuring the ecological impact of each item of clothing that goes through its factories, while other innovations integrated performance elements like antibacterial and thermal properties.

On the show floor, sustainability was highlighted by most exhibitors. “We’ve seen a lot of new developments in sustainability,” said Jasper van den Burg, a designer for Dutch brand Chasin’. “It’s more about sustainability and wearability than trends.”

“For the first time in the world, we are able to measure what happens in denim production and produce objective data,” said Fabio Adami Dalla Val, head of research and development for M&J Group, which operates two of the world’s only LEED platinum certified laundries.

The new software measures elements such as water, electricity, gas and chemical use at each stage in the production process as well as total added value time for each garment produced. “We finally know where we are, and we will define standards for new best practices,” he said.

“The market is at a turning point. Most of the big players are going in the direction of reduction of price. When you go to the shop, everything looks the same. We need to buy less — but better product — with a longer life. The market will improve the day we change the way we do things.”

The Moroccan Denim Cluster was also showcasing its sustainability credentials with an exhibition designed by denim veteran François Girbaud.

“We wanted to show that Morocco is capable of creating 100 percent sustainable collections,” said Serge Chouchana, president of the industry body. “This is a know-how we have not had the occasion to deploy extensively until now. We want to use our fast-fashion model and make it sustainable.”

Spanish company Jeanologia was presenting Quantum, a digital jean simulator that transposes virtual washes onto a screen and links the design studio with its production center. The company claims to be a world leader in the development of sustainable garment finishing technologies thanks to its solutions based on laser, ozone and nano-bubbles.

Italian company Freeexit was also showing its MyRags design simulator. “We need to help today’s creative to design by giving them a simple tool to express their creativity,” said founder Umberto Brocchetto.

The company’s touchscreen software allows the user to start with their own sketch or photo or choose from a database and customize their design with a choice of fabrics, finishes and details.

“Our aim is to remove part of the prototype stage,” he said. “This is more sustainable, because it saves time and resources and can be sent directly to the factory, removing the need for travel.”

Other new features at the show included The Denim PV Hackathon, in which students from fashion and IT schools competed to create a project for what they see as the denim of the future.

“It’s great to get the young design minds thinking in a very commercial way, and to see where you’re being taken by the young denim consumer, because they are the consumers of the future,” said Catherine Anderson Jones, Invista marketing and communications manager for performance and protective fabrics, who presided over the Hackathon judging panel. “We’re on the precipice of where to go next for denim. It will be of huge interest to the denim manufacturers and the buyers here to see what they come up with.”

“We’re definitely seeing the trend for that Seventies, Eighties and Nineties feeling,” said Kara Nicholas, vice president of product development and marketing for U.S.-based Cone Denim, whose selvedge looms going back to the 1940s allow it to create vintage-style textiles.

“We’re seeing that evolve and putting in some power stretch and we are also adding performance fabric capabilities, for example with Cordura,” she explained.

“When you put the stretch in, you reveal some interesting characteristics that add something new,” she added. “It’s important to think about what the consumer needs and offer something new at retail.” 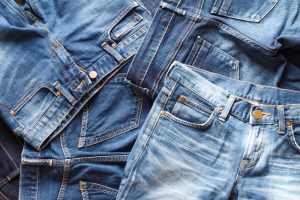 Hasan Javed, director of Pakistan-based Artistic Fabric Mills, agreed. “It’s a bit tough. We’re still running at close to 100 percent capacity, but there is pressure on prices. There’s too much capacity and a lot of retailers are struggling.”

The company was presenting innovations including fabrics with Coolmax technology and QR codes that allow consumers to check the sustainability criteria of a garment.

Part of the appeal of vintage looks, attendees said, is the authenticity they offer on a crowded market.

French firm Velcorex, based in Alsace and founded in 1828, reported brisk business, especially for its thick corduroy weights with a nostalgic appeal and its printed velvets.

The company was also showing its latest development, a linen-like fabric based on 100 percent organic stinging nettle and manufactured using no water or pesticides that has already attracted the eye of buyers from certain luxury brands, according to managing director Pierre Schmitt.

“People are looking for authentic fabrics,” he said. “That’s why velvet and cord are seeing such a comeback. Brands today copy Zara instead of working and producing differently, and customers are fed up of it. Our challenge is to show how we can stay within the denim universe but do something different.”

Another highlight spotted at the show was Pakistan-based U.S. Denim’s Duvet Denim, created using chicken feathers, which gives the fabric a unique flecked surface as well as providing thermal properties. Other buyers cited new color choices such as blends of grayish blue as a new proposition for fall 2018.

While visitor numbers at the event fell to just over 2,000, compared with 2,300 in November, core visitor traffic was roughly flat. “The number of pure players attending was stable,” said a spokesman for Denim by Première Vision. There were 84 exhibiting companies, on a par with the previous edition.

While some questioned the wisdom of holding the show just a week after Kingpins in Amsterdam, for those traveling from outside Europe, it allowed them to take in the two events in a single trip.

THEY ARE WEARING: Kingpins Tradeshow Amsterdam 2017>>

“It’s good to start here for every season,” said Tineke Tuijp, women’s denim buyer for Dutch brand We Fashion. “This is more commercial than Kingpins. It gives a good view.”