With jeans again focused more on fit and fabric and less on color, there’s a push for the branding of denim. 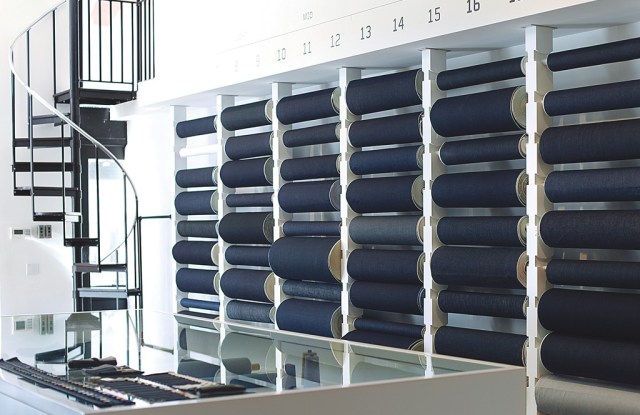 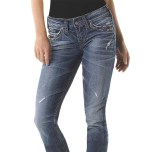 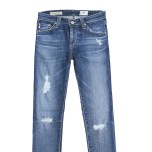 VERNON, Calif. — Hidden among food processing plants and sewing factories in this industrial city outside of Los Angeles, an airy showroom decorated with antlers, kilim rugs and indigo patch blankets is a haven for denim designers.

On the walls, visitors from J Brand and Red Engine have scrawled their love for the host, Orta Anadolu, which opened the space two years ago. Seeking inspiration for spring 2015, Nicolas Peyrache from Frame Denim dropped by one morning to borrow three of Orta’s 400 samples.

“That is to show the laundry,” he said. “I’ll bring them back ASAP.”

“Every day, a designer comes to borrow samples,” said Christina Brocato, a former denim designer and Orta customer who now handles its sales in Los Angeles, and Orta, which started 61 years ago and tallies annual sales of $245 million, expects more visitors from around the world. In addition to showrooms at its Istanbul headquarters and in New York, Los Angeles and Treviso, Italy, it unveiled another one earlier this month in Amsterdam, and it is prepping a Hong Kong location to open by June, said Ebru Ozaydin, Orta’s marketing director.

The samples “are incredible selling tools,” Brocato added. “It helps us create a brand. When you show aspirational garments, it’s like showing a collection.”

In the premium denim industry, the fabric is being elevated from a commodity to a brand. Once obsessing over the fit, consumers are starting to become more aware of the fabric clinging to their legs. Making up a third of the cost of a pair of jeans, the cloth has always been a key component. Technological advances are putting a priority on textile performance, especially in response to the ath-leisure trend, which is among a number of factors crimping denim sales.

Borrowing cues from the computer industry, where the groundbreaking “Intel Inside” campaign shone a spotlight on a tiny chip, textile mills are also stepping out from behind the scenes. Beside opening new showrooms, they’re publishing books, flying clients halfway around the world to attend seminars and soirees, underwriting fashion shows, licensing the use of their trademarks and unifying their hangtags and marketing ephemera in a consistent look.

A growing number of denim designers are teaming up with textile makers. Last year, Levi Strauss & Co. partnered with Woolmark to incorporate merino wool with cotton for its signature 501 jeans. In his first fall collection as Diesel’s artistic director, Nicola Formichetti integrated CoolMax moisture-wicking technology into $398 Jogg Jeans. To differentiate itself as a premium brand worthy of that sometimes-overused adjective, Seven For All Mankind has partnered with Malhia Kent, the French purveyor of tweed to Chanel, for three seasons and it is collaborating next with lace maker Solstiss for the holiday season.

Mavi Jeans, the $400 million denim brand from Turkey, is prepping to introduce a fabric called Maviterranean Denim, created in conjunction with Orta, for next spring. In development since last year, the proprietary material uses organic cotton and little water. Intended for its women’s premium subbrand called Mavi Gold, the fabric will be cut into jeans retailing for $160 to $180.

“You can’t wash a wrong fabric right. Neither can you give the comfort and shape and stretch that today’s premium consumer is expecting from a brand with the wrong fabric,” said Ersin Akarlilar, chief executive officer of Mavi Jeans. “It definitely starts with the fabric.”

Moreover, mills are morphing into manufacturers. Six years ago, Pakistan’s Artistic Denim Mills spun out a New York-based brand called DL1961 that uses denim integrated with XFIT Lycra and ProModal fibers made in its factory.

There can be a cap to creativity. The tightly woven tweed from Malhia Kent doesn’t stretch that much, and being beholden to a single mill could prevent DL1961 from experimenting with different materials and chasing new trends.

In sticking with one vendor, “there’s a verticality that gives them a better margin, but there’s a rigidness that prevents them from being fashion-forward,” said Tadd Zarubica, who is customizing fabrics with mills in China, Mexico and Guatemala for Winston & Hart, a young contemporary denim line he’s launching this fall with denim veteran Peter Koral. “If you’re not constrained by it, you can go where fashion dictates and buy the fabric from someone else.”

Textile mills have tried their hand at branding before. Cone Denim introduced its Deeptone selvage denim as a brand in 1936 and purchased ads promoting it in periodicals such as The Progressive Farmer and The Country Gentleman in subsequent decades. While the Greensboro, N.C.-based company, part of International Textile Group Inc., doesn’t currently offer Deeptone denim, it does market the White Oak selvage that is made in the namesake mill built in 1905.

On White Oak’s 100th anniversary, Cone reverted to using its original labels. It then began a free licensing program to approve denim brands that want to tout that they’re using White Oak. Since then, it has increased the production capacity of the fly shuttle looms that weave the narrow selvage denim at White Oak by 25 percent to fulfill orders for brands including Lee 101. In the last two years, it’s screened 10 to 15 inquiries a month from consumers who ask where they can find jeans made of White Oak denim.

Millennials who value transparency and authenticity imbibe that flow of information.

Still, no matter how savvy premium denim customers are becoming these days, they’re not going to pass a pop quiz on global textile mills.

“When was the last time you heard a girl say her jeans were made of a stretch fabric from Kaihara?” said Sam Ku, creative director at AG Adriano Goldschmied in South Gate, Calif., referring to one of his biggest suppliers. “Jeans are such an emotional purchase and not such an intellectual one.”

Designers still make the effort to educate consumers. At 3×1’s store in New York’s SoHo neighborhood, customers can unfurl any one of 80 rolls of selvage denim. Scott Morrison, president and designer of 3×1, who works with 18 different mills, accepts shoppers’ limited knowledge.

“What they know is the recovery and stretchability and that the quality is better,” he said. “The look of the jeans is better because the fabric is. They’re becoming aware of it subconsciously.”

To increase the awareness, Silver Jeans is formulating a new naming convention for all its fabrics, as well as a grading system for softness and stretchability. The first moniker, making its debut this fall, is Fluid Denim.

“We grabbed the most significant fabrics that we had and named them. It started a domino effect — we better name everything,” said Michael Silver, ceo of the $150 million brand based in Winnipeg, Canada. “To be honest, I don’t know if it’s going to resonate with the consumer or not.”

Sometimes, the best marketing campaign is the product itself.

“When you’re a woman and you go buy jeans, you touch and feel,” said Ali Fatourechi, founder and creative director of Genetic Denim.

Branding is not a priority for every textile firm. After 76 years in business, Milan-based Candiani spends most of its time and money in customizing fabrics for clients like RtA Denim, filing patents and inventing new technologies such as recycled fibers and indigo dye that doesn’t require a fixing agent. Never mind the prospect of designing jeans.

“We stick to making the fabric for the brands,” said Damiano Dall’Anese, executive vice president at Candiani. “We don’t want to get into any competition with the brands, honestly.”

Branding takes effort. In 2010, Isko, a division of Turkey’s Sanko Group, started taking steps to distinguish itself from its rivals. It sponsored showcases for denim designs at Copenhagen Fashion Summit and Los Angeles Fashion Week, hosted seminars taught by its staff in Europe and the U.S., and published a book, “Bluemasters,” featuring essays about Vivienne Westwood, Renzo Rosso and other fashion pioneers.

Isko also collaborated with denim executives who are experts in branding. With Hudson Jeans from City of Commerce, Calif., it worked on four exclusive projects, including a short film starring ballet dancers who pirouetted in stretchy jeans. On 3×1’s hangtag, a metal crimp reads “Powered by Isko.” For London-based MiH Jeans, Isko not only flew two designers to Los Angeles for one of its seminars last August, but it also helped underwrite a video and candlelit dinners in London and Los Angeles to promote last fall’s launch of MiH’s BodyCon jeans. It’s also footing a third of the bill for the second marketing push behind BodyCon.

“They’re excited to be involved in something that is elevated and creative,” said MiH Jeans founder Chloe Lonsdale. “Fabric mill branding is never that elegant. They’re very willing to invest.”

The branding initiatives have paid off, according to Marco Lucietti, Isko’s worldwide marketing director, who said, “Despite the fact that globally the denim market had some downturn, we’ve been growing by double digits over the past four years.”